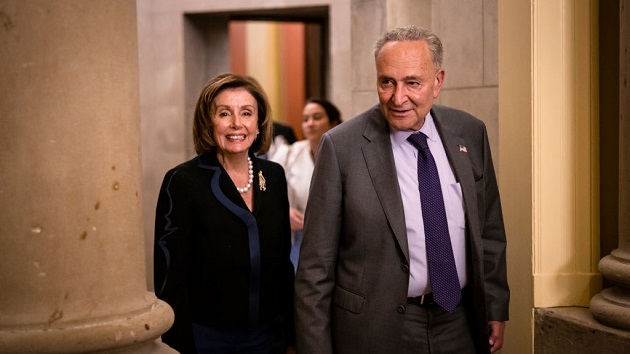 (WASHINGTON) — Congressional Democrats are eyeing a swift timeline for Senate approval of a $1 trillion bipartisan infrastructure plan, aiming to have the legislation on the floor as early as the week of July 19, according to three sources with knowledge of the matter.

The details of the timeline, including a push to have legislative language ready for consideration by Friday, were discussed among Democratic congressional aides and Louisa Terrell, the head of White House Legislative Affairs, and her deputy, Shuwanza Goff on a call Wednesday, the sources said.

The next hurdle for the bipartisan group of more than 20 co-sponsors, led by Sens Kyrsten Sinema, D-Ariz, and Rob Portman, R-Ohio, would be to obtain an official analysis of their bill by the nonpartisan Congressional Budget Office which crunches the numbers to see if proposed revenue would cover the desired new spending. That process takes time and usually far longer than most think or want.

The White House call and July 19 timeline were first reported by Politico.

Senate Majority Leader Chuck Schumer has said he wants the bipartisan package considered before the August recess. He said a sweeping — potentially $5 trillion — budget bill containing a blueprint for the top priorities of the administration and congressional Democrats, like child and elder care, Medicare expansion and climate change policies, would eventually be considered just after the monthlong summer recess.

The latter bill — a budget resolution laying the groundwork for a so-called reconciliation bill that would be crafted under arcane chamber rules that require just a simple majority — would instruct multiple committees to draft pieces of a broader bill. The final product would require unanimous Democratic support in the Senate and nearly every Democrat in the House, given that no Republican is expected to vote for it.

The budget resolution and its directives to committees, which unlocks the reconciliation process, is being crafted by Senate Budget Committee Chairman Bernie Sanders, I-Vt., and is expected to be unveiled early next week, according to two Democratic sources familiar with the matter.

Sanders has acknowledged the broad range of views among his Democratic panel members and caucus colleagues, conceding weeks ago that his ambitious price tag might need to shrink to win support.

The timeline for all of this is incredibly bold as Schumer and House Speaker Nancy Pelosi attempt to appease disparate factions of their caucuses. And Pelosi has insisted that she will hold onto any bipartisan infrastructure legislation that passes the Senate until that chamber also approves the reconciliation bill.

Moderates like Sens. Mark Warner, D-Va., and Joe Manchin, D-W.Va., have pushed for a far smaller package and urged against dramatically raising taxes on the wealthy to pay for the plan.

And Senate Republican Leader Mitch McConnell has made no secret of the fact that he plans to make it exceedingly difficult for his Democratic counterparts to maintain unity, urging centrist Democrats not to sign onto the sweeping, Democrats-only legislation.

“This is going to be a hell of a fight over what this country ought to look like in the future and that’s all going to unfold here in the next few weeks,” McConnell said Tuesday.”There is a process by which they could pass this bill without a single Republican, but we are going to make it hard for them,” McConnell said at an event Wednesday in his home state. “And there are a few Democrats left in rural America and some others who would like to be more in the political center who may find this offensive.”