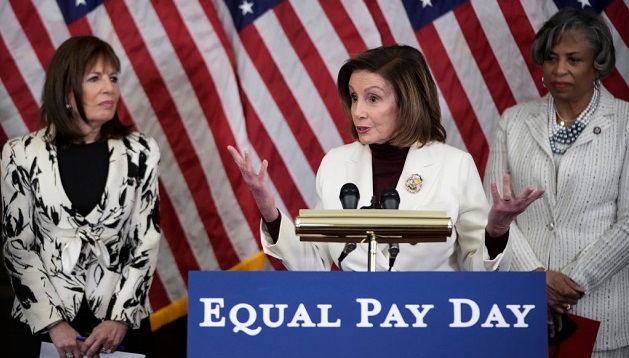 “They call this Equal Pay Day, but I like to call it ‘Unequal Pay Day’ because that’s the message that we are conveying today,” said Rep. Jackie Speier, D-Calif.

Formerly known as National Pay Inequity Awareness Day, the day — which fluctuates year to year — was first recognized in 1996 by the National Committee on Pay Equity. It is the date by which women’s average full-time wages catch up to men’s from the previous year. This year, it falls right in the middle of Women’s History Month.

“It’s not acceptable for me to see my sisters in the workplace, and getting paid less,” said House Democratic Women’s Caucus Co-Chair Rep. Brenda Lawrence, D-Mich. “So I want you to know, I will talk about this every year, but hopefully next year — I keep hope alive — next year, we’ll be saying we finally got it right.”

“And I will end with a statement that I know my speaker is going to say again, but when women succeed, America succeeds,” Lawrence added.

Women on average currently make 83 cents for every dollar earned by men — but that figure differs based on race.

“The pay gap reflects outright discrimination as well as barriers that women face in accessing good-paying jobs and meeting caregiving responsibilities — including a lack of affordable child care, paid family and medical leave and fair and predictable scheduling — which often prevent women from joining and staying in the workforce,” President Joe Biden wrote in a proclamation recognizing the day.

The Office of Personnel Management will also propose a regulation to “address the use of prior salary history in the hiring and pay-setting process for Federal employees,” according to a fact sheet released Tuesday by the Biden administration.

Ahead of an event Tuesday evening with the Bidens, Vice President Kamala Harris spoke at the White House at the Equal Pay Day Summit.

“Our economy just has not been working as it should for the women of our nation,” she said.

In addition to the summit, Harris met with current and former members of the U.S. Women’s Soccer team to talk about equal pay,after they settled their equal pay lawsuit with U.S. Soccer.

Harris praised the women for their work on the field and also for raising awareness of the fight for equal pay.

“Obviously, you all have been champions in terms of your skills and your dominance in terms of women’s soccer. But we are here today because you also have been leaders on an issue that affects most women and has affected most women in the workforce and it’s the issue of pay equity,” Harris said.

Harris and the players spoke about their fight, and the things they fought for beyond just compensation including playing surfaces, massage therapists and even things as simple as bagels after practice.

While the vice president tested negative for COVID-19 on Tuesday, she did not attend the evening Equal Pay Day event “out of an abundance of caution” after her husband, second gentleman Doug Emhoff, tested positive, according to the vice president’s office.

The wage gap is an immediate problem that leads to less money in women’s pockets but that it also has cumulative effects, according to Sarah Jane Glynn, a senior adviser with the Department of Labor’s Women’s Bureau.

She noted that women are less likely to have retirement savings and more likely to solely rely on Social Security and end up living in poverty in their old age.

The Department of Labor’s Women’s Bureau released a report Tuesday titled, “Bearing the Cost: How Overrepresentation in Undervalued Jobs Disadvantaged Women During the Pandemic,” which discusses the impacts of COVID-19 on women’s place in the workforce.

“The industries that women were in had the most significant job losses,” Glynn said. “So that’s a big part of the reason why we saw much higher unemployment numbers for women and why women experienced the majority of job losses during 2020.”

During the morning press conference, Speier brought up the need to pass the Paycheck Fairness Act, which addresses wage inequity based on gender. The bill passed in the House but has stalled in the Senate.

And the speakers expressed hope that the fight for equal pay will soon be a thing of the past.

“We, as women in this country, we know we add value to our economy, to our communities, to the overall safety of this country,” Lawrence said. “And we demand the respect and to be valued by paying us a wage that is equal.”