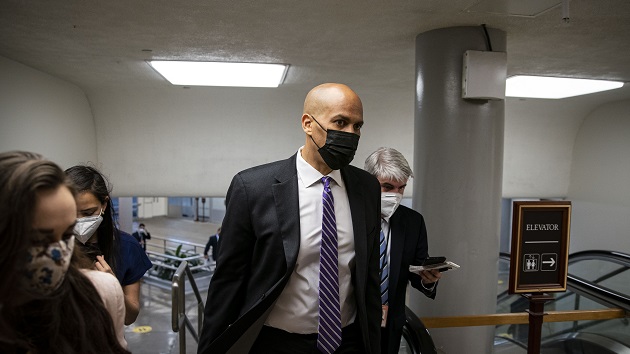 (WASHINGTON) — Both House and Senate Democrats on Tuesday pressed President Joe Biden to call to make the current expanded child tax credit permanent — as part of his “American Families Plan” he’ll detail in his address to a joint session of Congress Wednesday night.

The expanded child tax credit, by which families can get government payments for each child, was implemented for one year as part of Biden’s $2 trillion coronavirus relief bill passed in March.

In his Wednesday speech, he’s expected to endorse keeping the expanded anti-poverty program through 2025.

But some Democrats want to see him go further.

“Kids don’t grow up in five years,” Rep. Suzan Delbene, D-Wash., told reporters at a Tuesday news conference. “Parents need predictability to plan for their future over the long term.”

They say Biden must strike now, while Democrats control both chambers of Congress and the White House.

“Right now is the moment, and I’m not sure when windows like this will open again,” Sen. Cory Booker, D-N.J., said.

The Democrats say just a five-year expansion could see the program expiring with less supportive Republicans controlling the House, Senate or White House.

“We will run the risk of putting children and families at the risk of a Republican House, a Republican Senate, or God forbid a Republican President,” Rep. Ritchie Torres, D-N.Y., said. “I for one would never put the social security of families and children’s in the hands of an increasingly radicalized Republican party.”

Brian Deese, director of the White House Economic Council, said Biden is “incredibly proud” of implementing the program, and “believes that we should extend that – that policy to provide some certainty and stability to those families who will be relying on that payment but would see it go away if Congress doesn’t act.”

The administration, as well as lawmakers in both chambers, have touted the tax credit’s ability to lift children, particularly those in communities of color, from poverty.

According to the Center on Budget and Policy Priorities, a nonpartisan research group, the child tax credit passed in the COVID-19 bill would “lift 9.9 million children above or closer to the poverty line including 4.1 million Latino children, 2.3 million Black children, and 441,000 Asian American children.”

But the admin has not said whether it would back a more permanent expansion.

“What we’re determining is what we can do. And there’s a cost of it — it’s about a billion dollars a year for every year,” Psaki said. “And so, we have to figure out how to pay for it and there’s — this is all a part of the discussion.”

The expansion effort earned the baking of House Ways and Means Committee Chairman Richard Neal, who included an expansion of the program in his “Framework for American Families” unveiled Tuesday.

House Democrats have been quick to point out that they’ll be the ones crafting the legislation based off of whatever Biden proposes during his address to Congress. Rep. Rosa DeLauro, who chairs the House Appropriations Committee, said Tuesday that the House intends to use Neal’s framework to write legislation that would make the tax credit permanent.

“We have too much at stake the house will be writing the bill and we will be making the child tax credit permanent,” DeLauro, D-Conn., said.

In the House, an expansion of the tax credit could likely pass down party lines. But it faces a steeper battle in the Senate.

But the expansion is much less popular with Republicans, who generally are more skeptical of large-scale social programs and concerned about funding such an expansive proposal.

“When it comes to anything where there is decent policy or something that you’re going to want to help in that arena, there’s very little consideration here on any topic in terms of how you pay for it in the long run,” Braun said. “People look at the federal government, they want help. A lot of the issues I agree with, but no one here, including many in my party ever talk about honestly how the next generation and the generation after that is going to pay for everything that we’re dishing out currently.”

Bennet on Tuesday expressed optimism that Senate Democrats could expand the program using reconciliation, a procedural tool which allows the Senate the bypass the 60-vote threshold normally needed to move forward on legislation. But such a move requires the full support of all Senate Democrats.

“I think we can pay for it over the long haul,” Bennet said. ” And get it passed through reconciliation.”

But It remains to be seen presently whether permanent expansion is something all 50 Democrats would rally behind. If Democrats wanted to use reconciliation on the child tax credit, it would likely come as one part of larger push to get aspects of Biden’s infrastructure plan passed.