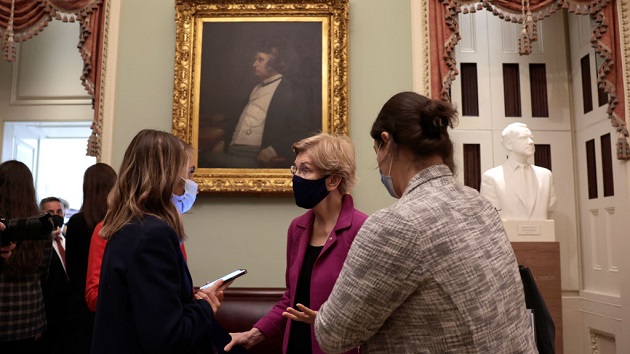 (WASHINGTON) — Democrats are leaving Washington for the holidays having fallen short on a slew of President Joe Biden’s top domestic priorities and staring down the barrel of a politically-contentious 2022 in which the balance of power in Congress is up for grabs and trending red.

After months of intra-party gridlock, the Senate is closing out its first session without voting on the president’s cornerstone social spending package with no clear path forward on how the bill might progress to the floor in the new year.

“The president requested more time to continue his negotiations. So we will keep working with him, hand in hand,” Majority Leader Chuck Schumer said on the Senate floor amid a rare Friday session, acknowledging for the first time that Biden’s Build Back Better bill will not come to the floor before the holidays.

West Virginia moderate Democrat Sen. Joe Manchin has proven to be the most intransigent of obstacles for Democrats who hoped to quickly expedite the social spending bill, which includes funding for in-home care, universal pre-K, an extension of the Child Tax Credit and Medicare expansion.

Manchin has for months opposed the cost of the $1.75 trillion bill, citing concerns that the real cost of the programs over time would plunge the nation trillions further in debt and spike inflation rates at a time when the cost of consumer goods is skyrocketing.

In particular, Manchin has insisted on extending the expanded Child Tax Credit for the full 10 years of the overall plan — a $1 trillion proposal — while also demanding that the price tag remain under $2 trillion, a dilemma that could only result in deeper cuts elsewhere among prized programs.

Despite ongoing negotiations with Schumer and Biden, Manchin hasn’t been persuaded to come off his position. His vote, and that of every Democrat in the Senate, is necessary to both start debate on and pass the final package.

Biden acknowledged as much in a separate statement released Thursday evening.

“My team and I are having ongoing discussions with Senator Manchin; that work will continue next week. It takes time to finalize these agreements, prepare the legislative changes, and finish all the parliamentary and procedural steps needed to enable a Senate vote. We will advance this work together over the days and weeks ahead; Leader Schumer and I are determined to see the bill successfully on the floor as early as possible,” Biden said.

Immigration reform, another key Biden campaign promise, has also hit snag. Democrats had hoped to work a pathway to citizenship into the proposal, but the Senate parliamentarian, who must assess whether certain items are admissible under the rules governing passage of the package, has ruled against multiple efforts.

On Thursday, the parliamentarian dealt Democrats yet another blow, ruling against their latest effort that sought to provide five-year work permits and deportation protection to undocumented immigrants who have lived in the U.S. for at least a decade.

Other December priorities also fell by the wayside as the Senate spent the month grappling with government funding, a must-pass defense authorization bill and a hike to the federal debt limit. All of these issues had to be attended to before the Senate left, and stalls on each priority ate valuable floor time.

Lawmakers will leave Washington this week also failing to address election reform after Republicans mounted a near-unanimous blockade on multiple legislative efforts. Under the current Senate filibuster rules, at least 60 lawmakers must consent to passage of federal voting rights legislation, and GOP opposition has all but doomed the reform efforts.

Democrats made a last-minute push for voting rights earlier this week, convening calls with Biden aimed at pushing moderate holdouts to consider reforming Senate rules to bust the GOP filibuster.

But Manchin and Sen. Kyrsten Sinema, D-Ariz., aren’t prepared to make exceptions to the Senate rules, even for voting rights.

Sinema “continues to support the Senate’s 60-vote threshold, to protect the country from repeated radical reversals in federal policy which would cement uncertainty, deepen divisions, and further erode Americans’ confidence in our government,” her office said in a statement Wednesday.

During Friday’s policy lunch, Democrats drilled down on the Senate rules, hearing from two former Senate rules experts. Sen. Richard Blumenthal, D-Conn., said that there are somewhere “between five and nine different plans or permutations of plans, some extremely complex, some pretty straightforward and simple” on getting voting rights passed through the chamber. But so far, there’s no obvious path forward.

“We’re talking about 50 very strong-minded, extremely independent elected officials, each with a separate constituency who are really looking into their consciences,” Blumenthal told reporters. “I think we’re very close, because I think that voting rights is so absolutely critical. I’m hopeful that the New Year will bring us closer together.”

Many Democratic lawmakers see substantive action before the November midterms as necessary to shore up their razor-thin majorities in both chambers of Congress. But Republicans are using the intraparty squabbling among Democrats as an opportunity.

They’ve painted Biden’s social spending agenda as an all but certain increase in inflation.

“I think the big story of the year is inflation,” Senate Republican Leader Mitch McConnell Thursday. “The single biggest thing we could do for the American people is to kill the reckless tax and spending spree.”

McConnell said he thought 2022 would be “a good environment” for Republicans looking to retake the majority, adding, “The places that will be making this decision are Georgia, North Carolina, Pennsylvania, New Hampshire, Ohio, Missouri, Nevada and Arizona, and we’ll be out there doing battle. And I think we’ll have the wind at our back.”