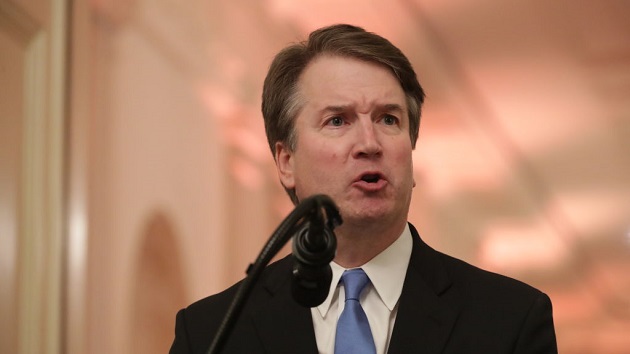 (WASHINGTON) — Senate Democrats are demanding answers after the FBI revealed just recently that it received more than 4,500 tips about Brett Kavanaugh when he was a Supreme Court nominee in 2018 and that only ones the agency deemed most “relevant” were referred to then-President Donald Trump’s White House.

The Democrats want to know how the information from the supplemental background check was handled and whether any of it was investigated, details they say were never passed on to the senators considering Kavanaugh’s nomination.

They asked the FBI to hand over by Aug. 31 “all records and communications” related to the first-of-its kind tip line the FBI set up that produced both “telephone calls and electronic submissions” and to explain how the tips were evaluated and categorized as “relevant.”

“If the FBI was not authorized to or did not follow up on any of the tips that it received from the tip line, it is difficult to understand the point of having a tip line at all,” they said in a letter to FBI Director Chris Wray.

It’s been nearly three years since Kavanaugh’s contentious confirmation onto the nation’s highest court following allegations by California professor Christine Blasey Ford that he sexually assaulted her at a party in Maryland when they were both in high school in the early 1980s. Local police did not investigate in 2018 and weren’t asked to look into her allegations around the time she says the incident happened.

Sen. Sheldon Whitehouse released a letter from the FBI Thursday, dated June 30, that was written in response to a two-year-old request from Sens. Whitehouse and Chris Coons asking about how an expanded FBI review of Kavanaugh — done in response to Ford’s allegation — was pursued and how involved the Trump White House was in the probe.

In the letter, Jill C. Tyson, an FBI assistant director said the most “relevant” of the 4,500 tips received in the probe were passed to the Office of White House Counsel under Trump, but no further, as a 2010 Memorandum of Understanding between the Justice Department and White House requires. The fate and subsequent actions based off those tips remain a mystery.

The letter stated that the agency was conducting a background check rather than a criminal investigation. “The authorities, policies and procedures used to investigate criminal matters did not apply,” Tyson said.

In light of Ford’s accusations, other allegations of sexual misconduct against Kavanaugh ensued, all of which he denied. Don McGahn was White House counsel at the time.

The allegations led to bitter divide among lawmakers over Trump’s nomination of the judge and saw Ford and Kavanaugh endure a heated daylong hearing in September 2018 where they were grilled by members of the Senate Judiciary Committee. Kavanaugh was eventually sworn into the Supreme Court in October that year.

The FBI response has only sparked outrage among Democrats. Whitehouse along with six other Democrats on the Senate Judiciary Committee — Sen. Dick Durbin of Illinois, Cory Booker of New Jersey, Richard Blumenthal of Connecticut, Patrick Leahy of Vermont, Mazie Hirono of Hawaii, and Coons — replied to the FBI’s letter Wednesday asking for additional details on the agreement with the White House over the inquiry and the handling of the incoming tips.

“The admissions in your letter corroborate and explain numerous credible accounts by individuals and firms that they had contacted the FBI with information ‘highly relevant to . . . allegations’ of sexual misconduct by Justice Kavanaugh, only to be ignored,” the senators wrote in response.

ABC News has reached out to the FBI for comment.

In the probe into Kavanaugh’s past, 10 witnesses were interviewed by the FBI, according to the letter, but Ford and Kavanaugh were not. It’s unclear whether those 10 were discovered through the tip line.

Debra Katz and Lisa Banks, the lawyers who represented Ford, said in a statement that the FBI’s investigations into her allegations about Kavanaugh’s alleged misconduct “was a sham and a major institutional failure.”

The lawyers said the FBI “handed the information over to the White House, allowing those who supported Kavanaugh to falsely claim that the FBI found no wrongdoing,” adding, “our nation deserved better.”