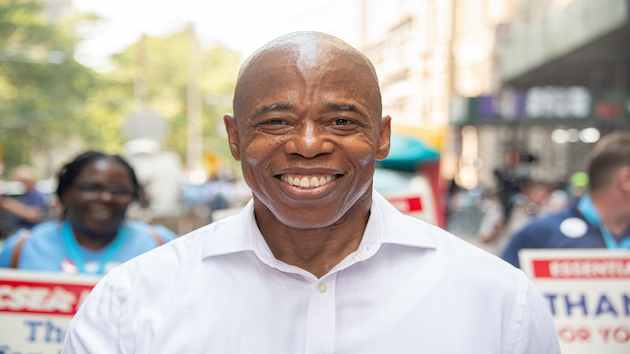 (New York) — Eric Adams, the moderate Democratic nominee for New York City mayor, said Sunday that members of his party should see from his victory that “we can’t be so idealistic that we’re not realistic.”

“Cities are hurting all across America and New York personifies that pain — the inequalities, the gun violence, the lack of really looking after everyday blue-collar workers, I like to say,” Adams told ABC “This Week” anchor George Stephanopoulos. “And we have failed for so many years. And we’ve allowed the fallout of the Trump administration to have an overreach in philosophy and not on-the-ground, real issues that are facing everyday New Yorkers.”

“So is it — is it fair to call you an anti-woke Democrat?” Stephanopoulos asked.

“A 35-year record of fighting for reform, for public safety, a person who was arrested by police, assaulted by police, but also lost a child of a friend to gang — to gang violence. And so I never went to sleep,” he continued. “And people who have finally realized that there are issues out here believe that they can carve the entire Democratic agenda.”

Adams won the city’s Democratic primary for mayor by a narrow margin. He will face Guardian Angels founder Curtis Sliwa, the Republican nominee, in the general election, but Adams is widely considered the favorite to replace outgoing Mayor Bill de Blasio.

As a former police captain, combating the rise in violent crime while balancing racial justice has been a focal point of Adams’ campaign.

“You didn’t back away from stop and frisk — took some heat for that during the campaign. How do you balance preventing crime and police reform?” Stephanopoulos asked Adams.

“It’s possible they go together, you can have public safety and reform, I know it,” Adams replied.