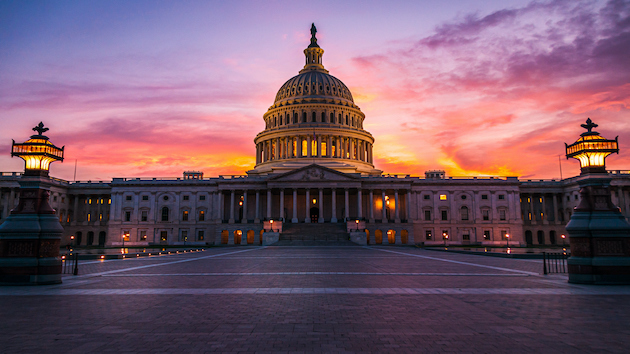 (WASHINGTON) — House Democrats on Monday took steps to advance a new spending bill for the Department of Health and Human Services without the Hyde Amendment, a 40-year-old provision that has banned federal funding for most abortions.

In moving the spending bill to the full House Appropriations Committee for debate and a vote, Democrats followed through on President Joe Biden’s proposed budget, which also did not include the amendment. House Democrats had indicated they would go this route and in doing so have effectively guaranteed that abortion access will be a central focus of government funding negotiations between Democrats and Republicans — who have the votes to block the Democrats’ measure from passing the Senate without changes.

The full House panel is expected to approve the bill and send the measure to the chamber for a vote. It’s not yet clear if the measure can clear the narrowly divided chamber without the Hyde Amendment, given Democrats’ slim majority.

As a senator, the devoutly Catholic Biden supported the Hyde Amendment over the years, but Biden reversed his stance in 2019 as he sought the Democratic Party’s presidential nomination.

“If I believe heath care is a right, as I do, I can no longer support an amendment that makes that right dependent on someone’s zip code,” he said. “I can’t justify leaving millions of women without access to the care they need and the ability to exercise their constitutionally protected right.”

Democrats and reproductive rights groups that have called for the measure to be overturned said it disproportionately impacts women of color and low-income communities. Specifically, the amendment makes it extremely difficult for anyone who relies on government-issued health insurance such as Medicaid to access abortion care. Under the Affordable Care Act, an expanded group of low-income Americans now receive health insurance through the federal government but can still face these specific restrictions.

Opponents of the long-standing rule pointed out too that there are currently no restrictions on care for men who rely on government insurance.

“Allowing the Hyde Amendment to remain on the books is a disservice to our constituents,” House Appropriations Committee Chair Rosa DeLauro, D-Conn., said in Monday’s committee hearing. “We are finally doing what is right for our mothers, our families and our communities by striking this discriminatory amendment once and for all.”

Alexis McGill Johnson, president and CEO of Planned Parenthood Federation of America, said in a statement that her organization was “thrilled.”

“For far too long, the racist and sexist Hyde Amendment has put the government in control of a personal health care decision for many people with low incomes. And its extension to our federal prison system is cruel and unjust. Your ZIP code, financial situation, whether you’re incarcerated or the type of health insurance you have should never determine what kind of essential health care services you can access, including abortion,” she wrote.

On the other side of the aisle, Rep. Kay Granger of Texas, the top Republican on the House panel, warned that overturning the Hyde Amendment would “destroy decades of bipartisan work” on the committee and called it “out of step with the view of most Americans.”

“Biden-Pelosi Democrats are scrapping decades of bipartisan consensus to force taxpayers to fund abortion, doubling down on extremism to appease an increasingly radical base,” said Susan B. Anthony List President Marjorie Dannenfelser said in a statement. “This bill is too extreme to pass the Senate and is a major political liability for pro-abortion Democrats.”

Sen. Patty Murray, D-Wash., the chairwoman of the panel that handles health care spending in the Senate, acknowledged to ABC News the reality that the votes just aren’t there for the spending bill to pass the chamber without the Hyde Amendment.

“Well I support it,” she said of the amendment’s exclusion. “But I have to have the votes and that’s what we’re looking at.”

According to the Guttmacher Institute, state legislatures in 16 states have passed more than 80 abortion restrictions this year alone. Advocates on both sides of the aisle are bracing for the Supreme Court, with its new conservative majority, to hear a major case challenging the current abortion right precedents established in Roe v. Wade.