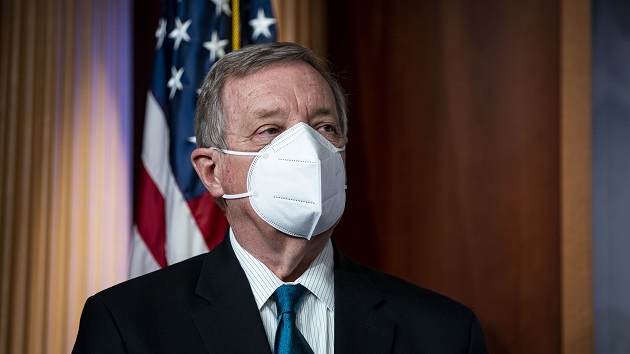 “Certainly we know that the activities of this group, this mob, this insurrection are being held to account by the Department of Justice, over 200 have been arrested and 500 under investigation,” Durbin told Chief Washington Correspondent Jonathan Karl and Political Director Rick Klein on ABC’s “Powerhouse Politics” podcast Wednesday.

In his Senate Judiciary confirmation hearing on Tuesday, attorney general nominee Merrick Garland told senators he plans to pursue leads “wherever the investigation takes us,” in response to a question from Sen. Sheldon Whitehouse, D-R.I., encouraging Garland to look “upstream” for connections.

Durbin said he interpreted Garland’s answer as not ruling out any potential players involved in the violence on Jan. 6.

“So as of the event, and everything that followed, there’s an active investigation, been described as one of the most historic and complex investigations in the history of the Department of Justice, just to put it into perspective. But I took that upstream question to mean… what happened, what preceded this event? What planning? What type of conspiracy, if there was one? What was it that led to this and the different groups that seem to merge together on that day?” Durbin said.

Regardless of the investigation and potential criminal charges against Trump, which Durbin told Karl and Klein he didn’t feel comfortable making predictions about, he said he believes Trump will be held responsible.

“I think morally, politically, historically,” Durbin said. “I think what I’ve read so far, there is clarity in connecting President Donald Trump with provoking and inciting that mob to its violence.”

Durbin, who chairs the Senate Judiciary Committee, said Wednesday that he’d like to see the 9/11 style commission being pursued to investigate Jan.6. focus on a rise in domestic terrorism.

“I think we’re gonna follow the model with the 9/11 commission,” he said. “I think we ought to follow that model, and it’d be a good one.

“What are we doing about this rise in domestic terrorism? I have been pushing this issue long before January 6, because I can see it happening in Charlottesville and many other places, where groups inspired by white nationalist, white supremacist and far-right leanings, were becoming more militant and brazen in their activity,” he added.

Karl asked Durbin about his view of Sen. Joe Manchin, a moderate Democrat from West Virginia, and his announcement that he would vote against Neera Tanden, Biden’s pick to direct the Office of Management and Budget.

“With a 50-50 Senate, any person can stop the train,” Durbin said. “And in this situation, Joe, if he hasn’t stopped that he slowed it down, because the White House and supporters of Neera Tanden have to find a Republican vote to replace him.” He added that Tanden’s confirmation is “still within the realm of possibility.”

Durbin said there must be outreach from the White House to members of the Senate as the process of confirming Biden’s nominees goes forward. He noted that the pressure was on for Biden to prove his negotiating skills, but that the White House is still in “startup mode.”

“They are also in the startup mode, and a new president right off the bat has to show his skills in dealing with Congress to put together his team, his Cabinet…I have asked in the most general way, whether some of these Republicans were consulted. And the White House has said it’d become increasingly difficult to get through the staff to the member,” he said.

“So I don’t know where the blame lies. But I will just say, the bottom line is this. There has to be an outreach by the White House to every senator who could conceivably support their nominees and an offer to discuss it. That is just basic Senate 101. And I hope that if it hasn’t happened to this point, it will from this point forward,” he added.

Manchin also said he does not support raising the minimum wage to $15 an hour, which is currently a part of Biden’s $1.9 trillion coronavirus relief package. Durbin said passing the wage increase will be a difficult fight, but one that is overdue.

“If it is permitted in the reconciliation bill, I hope that debate goes forward. I’m not suggesting that it’s going to be easy. In fact, it may be a problematic issue. But we shouldn’t walk away from this,” Durbin said.

“This is long overdue,” he said. “And I’m willing to be open and open-minded when it comes to suggestions on how to do it differently.”