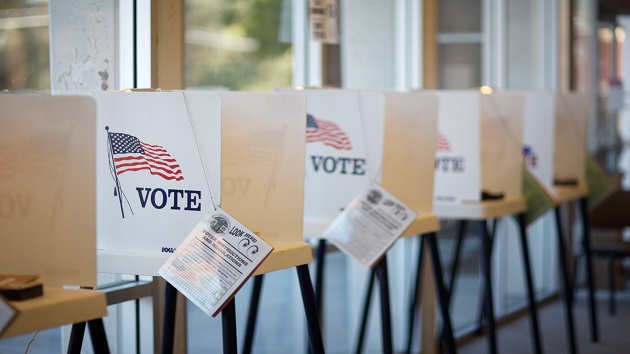 (NEW YORK) — Virginians head to the polls Tuesday to vote in the Democratic gubernatorial primary, and while former Gov. Terry McAuliffe is the front-runner, his opponents are barnstorming the commonwealth in the final stretch to convince undecided voters they are the right choice to beat GOP nominee Glenn Youngkin in November.

Over 90,000 voters have already cast ballots in the election, according to the Virginia Public Access Project, and while a Roanoke College Poll published Friday showed nearly half of likely Democratic primary voters support McAuliffe, it also indicated about a quarter of likely voters were still undecided.

“When a lot of people think about these elections, they assume that the person who has been elected will be elected again, and they talk about inevitability,” Carroll Foy said, referring to McAuliffe’s 2013 victory. “Inevitability only exists if we allow it.”

In Virginia, governors are barred from serving consecutive terms but can seek reelection in the following cycle, as evidenced by McAuliffe’s bid. Current Gov. Ralph Northam endorsed McAuliffe, his predecessor, in April.

In the final debate of the campaign Tuesday, the candidates ramped up their criticism of McAuliffe. But the former governor opted against responding directly, instead defending his record while contrasting himself with Youngkin and tying the GOP nominee to former President Donald Trump, who’s endorsed him.

In interviews with ABC News after that debate, McAuliffe’s opponents doubled down, arguing he was not the right candidate for this moment.

Carter, a progressive who supports policies like universal health care, said McAuliffe shouldn’t be “harping on” Trump now that he’s out of office, and he should instead focus on the “conditions” that led voters — many of whom previously voted for Democrats — to support the former president.

The former Marine said he was inspired to get into politics after the workers’ compensation system “dropped the ball” on his case following a workplace injury and that he met many people with similar stories when he was first campaigning.

“The fact that so many people have this same experience means that something is deeply, deeply wrong in our society… And our government seems completely oblivious to that fact because it’s run by millionaires and lawyers who don’t have that experience,” Carter said, taking a subtle dig at the three other candidates who all have legal backgrounds.

McClellan and Carroll Foy argued that Virginians want a change in leadership.

“People are looking for somebody to vote for because they’re going to help them and not just somebody to vote against,” said McClellan, who’s been in the legislature for almost 16 years, including 14 in the minority party.

Virginians are excited about her candidacy, she said, “because they know that I’ve been putting in the work and showing up when it’s hard and nobody was paying attention.”

Carroll Foy, a public defender who grew up in one of the poorest areas of Virginia, described Youngkin and McAuliffe as “two wealthy, millionaire, out-of-touch politicians who don’t understand the struggles that everyday Virginians face.” While she, like McClellan, pledged to support whomever the Democratic nominee is, she said McAuliffe at the top of the ticket would “jeopardize” Democrats’ chances of holding the governor’s mansion and maintaining their majorities in both legislative chambers.

But freshman Del. Shelly Simonds, a McAuliffe backer, said the former governor was instrumental in helping Democrats, including herself, win and take control of the legislature’s lower chamber in 2019.

“I don’t think it’s necessarily going to be a cakewalk this November for the Democrats in Virginia,” she told ABC News. “I think Terry McAuliffe is the one who can harness a lot of the resources we need to communicate widely with people in Virginia about the stakes … we can’t let Virginia go backwards.”

McAuliffe was not available to be interviewed for this story.

When McAuliffe, a 64-year-old white man, announced his bid in December, he became the instant favorite to win, given he’d already won in 2013, breaking the so-called “Virginia curse” of candidates losing the gubernatorial race if they have the same party affiliation as the current occupant of the White House.

But with three Black candidates already in this race — Fairfax, McClellan and Carroll Foy — McAuliffe’s candidacy also prompted the narrative that he is standing in the way of a potentially historic win.

Americans have only elected two Black governors in the nation’s history, in Virginia and Massachusetts. But no state has ever elected a Black woman to its top executive post, something both McClellan and Carroll Foy, who secured a key endorsement from Higher Heights, a national organization working to elect Black women, are eager to change.

“It would be an easier path if (McAuliffe) weren’t there, but, as a 48-year-old Black woman, I am used to having to overcome barriers,” McClellan said, adding that she disagreed he’s the front-runner.

Fairfax’s campaign did not respond to an interview request, but in the final debate, the lieutenant governor — a one-time rising star whose candidacy has been marred by sexual assault allegations, which he’s denied — alluded to McAuliffe as a barrier to racial progress.

“I think it’s very important, and should be said with three African American candidates here for governor … when African Americans are shut out of opportunities repeatedly, it sends a signal to people about what our system truly values and who truly has the opportunity to succeed in our society,” said Fairfax, who’s only the second Black American elected to statewide office in Virginia’s history.

Many prominent Black lawmakers in the commonwealth, however, are backing McAuliffe, who touted Tuesday that he has “three times as many” endorsements from members of Virginia’s Black Legislative Caucus than the rest of the candidates combined.

State Sen. Louise Lucas, a co-chair of both the McAuliffe campaign and the Black Caucus, has known McAuliffe since 1992 and personally asked him to run again.

“I am just as adamant about progress as anybody, but I’m also a realist — I don’t want to lose ground,” Lucas said in an interview. “I need to have some confidence that the person who is going to be taking on Youngkin is gonna go head-to-head, nose-to-nose, toe to-toe, dollar-for-dollar, and I see Terry as being the best qualified, best suited, best prepared to do that.”