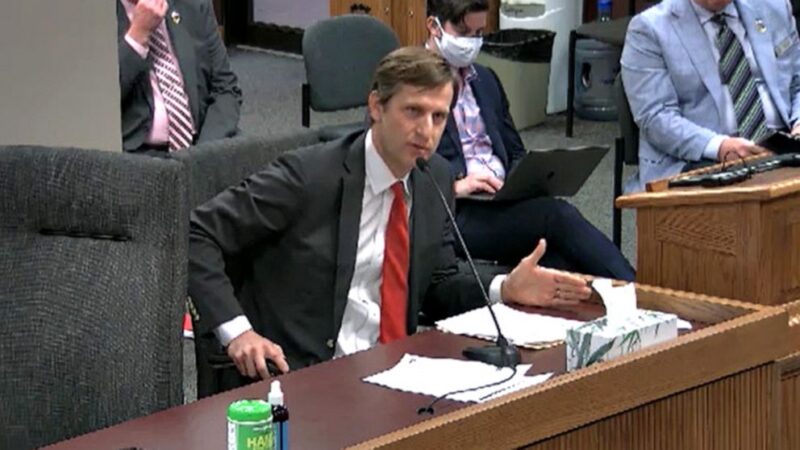 (JEFFERSON CITY, Mo.) — A Missouri father has gone viral for an emotional speech defending his transgender daughter before lawmakers considering a ban on trans high school athletes, in which he pleaded, “let them be who they are.”

Brandon Boulware identified himself as a father to two boys and two girls, “including a wonderful and beautiful transgender daughter,” when he spoke before the Missouri state House on March 3.

Boulware urged lawmakers to vote against Joint Resolution 53, a bill similar to the one signed into law in Mississippi last week that bans trans girls and women from participating in school sports.

He said for years he did not let his daughter wear girls’ clothes or grow her hair out to “protect” her from being teased, but as a result she was “miserable.”

“And truth be told, I did it to protect myself, as well. I wanted to avoid those inevitable questions as to why my child did not look and act like a boy,” he said.

Boulware said he had a breakthrough when his daughter asked him to play with the neighbors across the street while she was wearing one of her sister’s dresses.

MUST WATCH: Brandon Boulware, the father of a transgender daughter, testifies during a hearing asking Missouri lawmakers to stop discriminating against trans youth. pic.twitter.com/bTuSoyE1nW

“She asked me if she went inside and put on boy clothes, could she then go across the street and play? And it was then that it hit me,” he said. “My daughter was equating being good with being someone else.”

From then, Boulware said he’s seen his daughter flourish into a happier version of herself.

“The moment we allowed my daughter to be who she is, to grow her hair, to wear the clothes she wanted to war, she was a different child. … I now have a confident, a smiling, a happy daughter,” Boulware said.

He appeared before the state House on March 3, his daughter’s birthday. He said she did not know he was appearing before lawmakers to fight on her behalf.

Critics of having transgender athletes on teams argue they have unfair physical advantages.

“I need you to understand that this language, if it becomes law, will have real effects on real people. It will affect my daughter. It will mean she can’t play on the girls’ volleyball team or dance squad or tennis team,” Boulware said. “I ask you, please don’t take this away from my daughter or the countless others like her out there.”

“Let them have their childhoods, let them be who they are. I ask you to vote against this legislation,” he added.

Video of his speech shared by the American Civil Liberties Union was viewed more than 6.7 million times by Wednesday.

Republican state Rep. Chuck Basye, the sponsor of the bill, said the bill is intended to support cisgender girls in their athletic careers.

“Women or young girls, ladies in that matter, after they work hard in a competitive sport and then lose that opportunity to go on to the next level to get a college scholarship,” Basye said to local TV station KTVI.