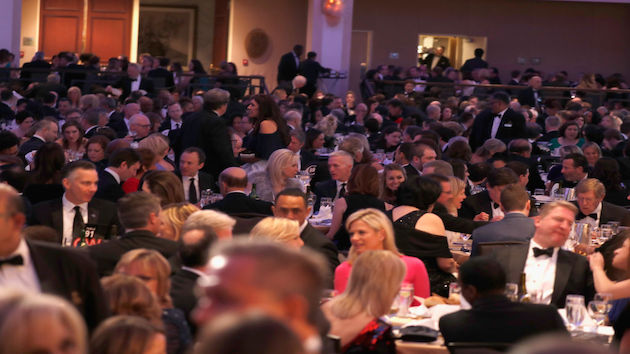 (WASHINGTON) — With power players flocking to a crowded Washington hotel ballroom for the White House Correspondents’ Dinner Saturday, many itching to mingle after a two-year COVID-induced hiatus, the virus appears to be creeping closer to the gala’s star guest — President Joe Biden — with a positive test for a top aide on Friday.

White House communications director Kate Bedingfield is the latest in Biden’s inner circle — following Vice President Kamala Harris — to test positive for COVID this week, tweeting on Friday that she last saw the president two days before in a “socially-distanced meeting while wearing an N-95 mask.”

This morning, I tested positive for COVID-19. I last saw the President Wednesday in a socially-distanced meeting while wearing an N-95 mask, and he is not considered a close contact as defined by the CDC.

Saturday’s event now coincides with concerns it could become a superspreader like the Gridiron Club Dinner, after which at least 72 attendees reported testing positive. Biden’s chief medical adviser, Dr. Anthony Fauci, dropped out of the dinner earlier this week — citing his individual assessment of his own personal risk CNN first reported — while White House COVID coordinator Dr. Ashish Jha has said it should go forward.

“These are the strategies we have learned over the last two years, and if we implement them, do I think it’s safe for people to gather together indoors? Absolutely,” Jha said earlier this month on “Fox News Sunday.”

White House press secretary Jen Psaki was asked Wednesday about the discrepancy between Biden and Fauci’s plans and whether there’s concern Biden would be considered as “not following the science.”

“Every individual will make their own decisions about whether they attend this event, other events, whether they wear a mask at it or not,” Psaki said, noting the COVID protocols in place for guests.

“He [Biden] has made the decision he wants to attend, in a safe way, the White House Correspondents’ Dinner to show his support,” she continued. “That does stand in stark contrast to his predecessor, who not only questioned the legitimacy of the press on a nearly daily basis, but also never attended the dinner, I don’t believe.”

Unlike former President Donald Trump, who notably skipped the event while in office, Psaki said Americans can have eyes on Biden for what she called “his roasting, where he will be on the menu, as he likes to say, when Trevor Noah is speaking.”

She also stressed that Biden, who is also slated to deliver a routine of his own, is taking extra precautions like skipping the dinner portion of the event. She said she expects he’ll be at the event “for about an hour or 90 minutes.”

“He’s not attending the dinner portion. He’s coming for the program. So and he will likely wear a mask when he’s not speaking,” Psaki said on Friday. “And then he’s of course sitting on the dias up in the front of the interaction and is not attending any of the receptions.”

She added that Biden tested negative on Thursday, “but I don’t have anything to predict in terms of the future,” she said.

Asked what to expect from his remarks, Psaki said, “The president has a very good sense of humor and is working hard on his own speech.”

In recent weeks, as the BA.2 subvariant has spread around Washington, the White House changed its messaging to say that Biden, like any other American, could test positive “at some point,” but stressed that he has the capacity to “run the country from anywhere” and is up-to-date on COVID boosters.

“Just like anything, it’s a risk assessment, and a decision he made on a personal basis,” Psaki said this week.

Comedian Trevor Noah is set to host Saturday’s dinner, for which guests are required to show proof of vaccination and a day-of negative COVID test. Drew Barrymore, Kim Kardashian and Pete Davidson are among celebrities planning to attend, according to a Deadline report.

Despite the close cases — not deemed close contacts — the positive tests have not had any impact on the president’s plans to take part in large events. He attended the funeral of Madeleine Albright on Wednesday and is scheduled to also travel to Minnesota for the memorial of Walter Mondale on Sunday.