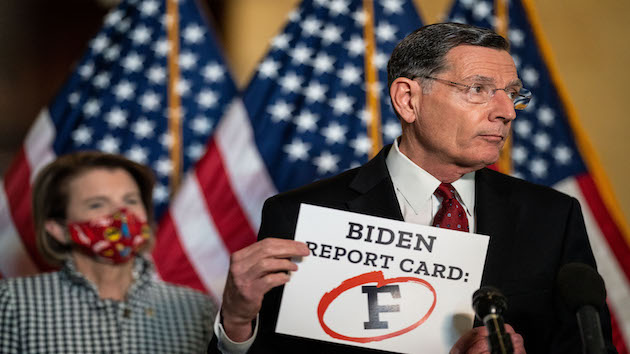 Despite Democrats’ claims of success on the COVID-19 relief bill, only a portion of the funds go to stopping the spread of the virus, Barrasso, the Senate Republican conference chair, falsely told “This Week” anchor George Stephanopoulos.

“Only 9% of the money actually goes to defeating the virus,” Barrasso said, repeating claims about allocations which fact-checking sites have found are false. “Only 1% of the money goes for vaccines. This is a Nancy Pelosi pay off to the liberal left.”

A USA Today fact check, indicated that 85% of the bill is directly related to the coronavirus pandemic and about 15% of the proposal goes to “long-standing policy priorities that are not directly related to the current crisis,” according to the Committee for a Responsible Federal Budget, a nonpartisan, nonprofit organization formed to educate the public on federal budget issues.

The expansive proposal provides direct relief payments and federal unemployment aid to Americans, give schools more funds to help with reopening and help speed up coronavirus testing and vaccination efforts. But the legislation also includes resources for pension plans, the arts, museum and library services and federal transit, which only make up a small percentage of the final price tag. The legislation also includes changes to the tax code and the most aggressive expansion of the Affordable Care Act since the health care law’s passage.

Barrasso argued Sunday that Biden had a path paved for him on the economy when he entered the White House.

“That’s what President Biden has inherited, a recovering economy. So Republicans want to make sure people get shots in the arms, kids get back to school, people get back to work, but we are not going to stand with the Democrats as they try to exploit a crisis to send lots of money to big cities and to blue states,” he said.

Stephanopoulos pressed Barrasso on the distribution of money to states and localities, noting that Wyoming is set to receive $1 billion under the legislation.

Barrasso said the formula they used favored states which pursued stricter lockdown measures to curb the spread of the disease.

“It punished the states that opened earlier and it rewarded the states that stayed closed,” he said. “The bill is going to come due for this, and ultimately, as you just heard Nancy Pelosi say today, to you, taxes are going to be next on the Democrats agenda.”

Democrats are also entertaining possible modifications to the Senate filibuster, which would make it more difficult for the minority to block legislation. The idea is to make it more difficult to use the filibuster to block a vote on the bill by reinstating the practice of talking on the floor without interruption to block a vote. Currently, the majority must find 60 votes to go forward with legislation. A talking filibuster would move the burden to the minority, forcing them to the floor to speak.

“To be clear, you have no problem with going back to the talking filibuster?” Stephanopoulos asked.

“I don’t mind talking. I think that people ought to be able to stand and express their views. The question is: is it 50 votes or 51? Or is it 60? And the current number is 60. We’ve had this going on now for over a century,” Barrasso said.

As the No. 3 in the Senate Republican leadership, Barrasso’s conference is also facing internal difficulties of its own.

Sen. Ron Johnson. R-Wis., is facing calls to resign after comments he made Thursday about Black Lives Matter and antifa that have been deemed “racist” and “unacceptable.”

Johnson, a Republican, told a Wisconsin Radio show host that he was not concerned for his safety during the Jan. 6 attack on the Capitol, which left five dead, but that he may have been if the protesters had been linked to Black Lives Matter and antifa.

“I knew those are people that love this country, that truly respect law enforcement, would never do anything to break a law,” Johnson told the conservative radio station. “And so I wasn’t concerned. Had the tables been turned, and President Trump won the election, and those were tens of thousands of Black Lives Matter and antifa protesters, I might have been a little concerned.”

“Democrats are calling on Sen. Johnson to resign. Do you agree with those comments? Should he apologize?” Stephanopoulos asked.

Barrasso pointed to protests in Portland, Oregon, but did not answer Stephanopoulos’ question.

“Look what’s happened in Portland, just the other night. These things continue, we need to get back to a nation and a state where the right the razor wire can come down, the fences can come down, people can get back to Washington and the Capitol,” Johnson said.

Stephanopoulos pressed Barrasso again on whether or not he believes Johnson should apologize for his comments.

“So, should he apologize?” he asked.

“Well, he’s going to speak for himself,” Barrasso said. “Every member speaks for themselves and I’m telling you what I believe.”