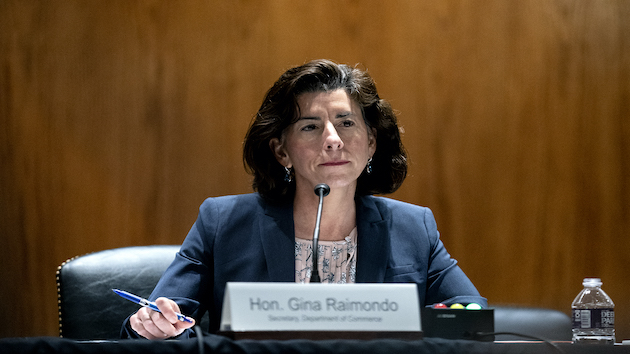 (WASHINGTON) — Infrastructure negotiations between the White House and Republicans continue on Monday with the two sides still very far apart on how much to spend and how to pay for it, but Secretary of Commerce Gina Raimondo is broadening the timeline to strike a deal saying Sunday that there is no “hardwire deadline.”

“This is not do or die,” she told ABC “This Week” anchor George Stephanopoulos, while also warning that the White House “won’t do this forever.”

“Folks want a bipartisan deal. If we don’t get there, then we’ll consider other options, but it’s way too soon at the moment to say that,” she said on ABC’s “This Week.”

Biden on Friday held his latest conversation with Sen. Shelley Moore Capito, who is leading negotiations for Republicans. Speaking over the phone, he turned down the GOP’s latest offer because it didn’t meet Biden’s “objectives to grow the economy, tackle the climate crisis, and create new jobs,” White House press secretary Jen Psaki said in a statement.

The most recent offer from Biden is $1 trillion in new spending, while the Republican counteroffer of nearly $980 billion only includes roughly $300 billion in new infrastructure spending, a substantial difference.

Also causing friction is how to pay for it all. Biden has sidestepped his initial call for raising the corporate tax rate to 28% and proposed creating a minimum 15% corporate tax rate. Republicans want it to be funded with user fees, but the White House has said they would not agree to do that.

If Democrats do push this forward on their own, they could face resistance from moderate Democratic Sens. Joe Manchin and Kyrsten Sinema, who oppose using the reconciliation process — a procedural tool that could allow them to bypass minority opposition — to get infrastructure passed.

Pressed by Stephanopoulos if she’s confident they will come around if bipartisan talks break down, Raimondo said, “I think they will.”

“They are very engaged. Both of them — they want to do what’s right,” she said.

As Biden pushes his infrastructure plan, hiring in the U.S. remains sluggish. Following the May jobs report that was released on Friday, the president signaled that some extended unemployment benefits should expire in September and Stephanopoulos pushed Raimondo on whether those benefits have held Americans back from seeking employment.

“We hear it anecdotally, but I would say there’s no evidence that they have significantly held back hiring,” she said. “Make no mistake about it though, they were necessary and they were a lifeline for Americans for the past several months during this pandemic.”

There were 559,000 jobs added in May and the unemployment rate is 5.8%, according to the Bureau of Labor Statistics.

The administration is also having to manage a surge in cyber and ransomware attacks, calling it an “urgent national security concern.”

The hacks are being targeted at private companies, affecting food, energy and transportation systems and disrupting many parts of American life. Stephanopoulos asked if the government should do more to force businesses to protect themselves and customers.

“This is the reality, and we should assume and businesses should assume that these attacks are here to stay and — if anything — will intensify,” Raimondo responded.

Several recent attacks have been linked to Russian-based hacking groups and Biden has said he plans to confront Russian President Vladimir Putin when they meet in Geneva on June 16.

Raimondo told Stephanopoulos that the U.S. is “evaluating all of the options” when he asked if the administration should be taking a more aggressive approach and target the source of these attacks.

“We’re not taking anything off the table as we think about possible repercussions, consequences or retaliation.”

And even though the attacks may have been carried out by private entities and not by a foreign government, Stephanopoulos questioned if the U.S. should even be considering military action.

“All options are on the table,” she said. “This is a top priority.”