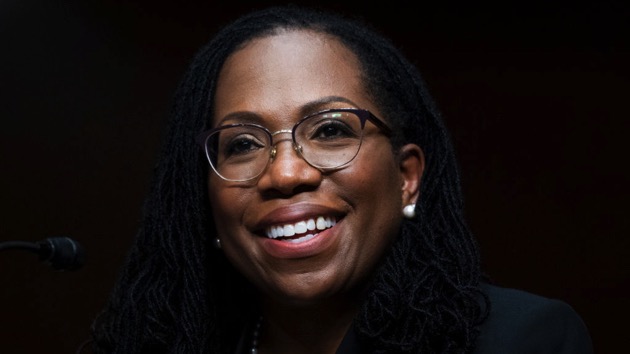 (WASHINGTON) — Civil rights attorney Ben Crump publicly urged President Joe Biden to tap Judge Ketanji Brown Jackson for the Supreme Court on Wednesday, as the president closes in on a decision for his first nomination to the high court.

“In my view, that of a civil rights lawyer and advocate who is committed to bringing justice, respect, and fairness to this nation, and particularly to my community, that woman is Judge Ketanji Brown Jackson,” Crump said in a statement, provided first to ABC News.

The endorsement — the first from a high-profile Black civil rights advocate — is a significant boost for Jackson after African American community leaders have spent weeks largely remaining neutral on the pick.

Over the past decade, Crump has represented the families of Trayvon Martin, Michael Brown, Breonna Taylor, George Floyd, Ahmaud Arbery, Jacob Blake, Daunte Wright — Black Americans whose deaths at the hands of police sparked outrage and calls for justice. Crump joined the Floyd family for a meeting with the president at the White House last April, on the first anniversary of George Floyd’s death.

“My standards for this nominee go beyond integrity, brilliance and fairness,” Crump said in the statement. “I carry the additional purchase that this justice must represent African Americans in a way that has cultural competency, forcefulness and instills deep pride.”

Crump’s embrace of Jackson is a break with South Carolina Democratic Rep. Jim Clyburn, an influential Biden ally, who has spent weeks lobbying for U.S. District Court Judge J. Michelle Childs, touting her blue-collar background and educational diversity as a graduate of state universities in contrast to the Ivy League pedigree of most other justices.

Jackson, the daughter of school teachers and product of Miami-Dade public schools, is a graduate of Harvard and Harvard Law.

ABC News has confirmed the president has completed interviews with Childs, 55, Jackson, 51, and Kruger, 45, and that a final decision is imminent. A Black woman has never been nominated to Supreme Court.

In his statement, Crump praised Clyburn and his late wife Emily for securing Biden’s commitment during the 2020 campaign to nominate a Black woman, but says Jackson is better prepared for the high court.

“There will be no learning curve for Judge Jackson, she knows the law, has adjudicated it well, and is battle tested. Jackson has the educational credentials and commitment which put her in an elite with which the Court is familiar, having the same credentials as most of the modern justices, if not more than,” Crump said.

“We African Americans eagerly await and demand that model: a talented African American woman who not only acts justly and upholds our Constitution, but is rooted in an experience that so many of us share. That person is Judge Ketanji Brown Jackson,” Crump highlighting her experience as a public defender, clerk for Justice Stephen Breyer, and advocate for criminal sentencing reform in her role for the U.S. Sentencing Commission.

Crump and Jackson have taught twice at a seminar at Harvard’s Trial Advocacy Workshop, serving as teachers and mentors for students calling her “humble” and “gracious.”

“But through it all she’s been an advocate for and proud of our African American community,” he said. Adding, “For the combination of brilliance, integrity, experience, and assurance that African Americans will hold this choice as we do the memory of Thurgood Marshall and Constance Baker Motley, I overwhelmingly support the historic choice of Judge Ketanji Brown Jackson.”

Other Black leaders have been reluctant to endorse a candidate.

A group of 14 Black female lawmakers led by Rep. Cori Bush, D-Mo. sent a letter to the president outlining their priorities and called on him to select a nominee committed to advancing civil rights but declined to name a candidate.

Bush told reporters, “I just don’t think it’s our place to pit Black women against each other who are trying to get this spot.”