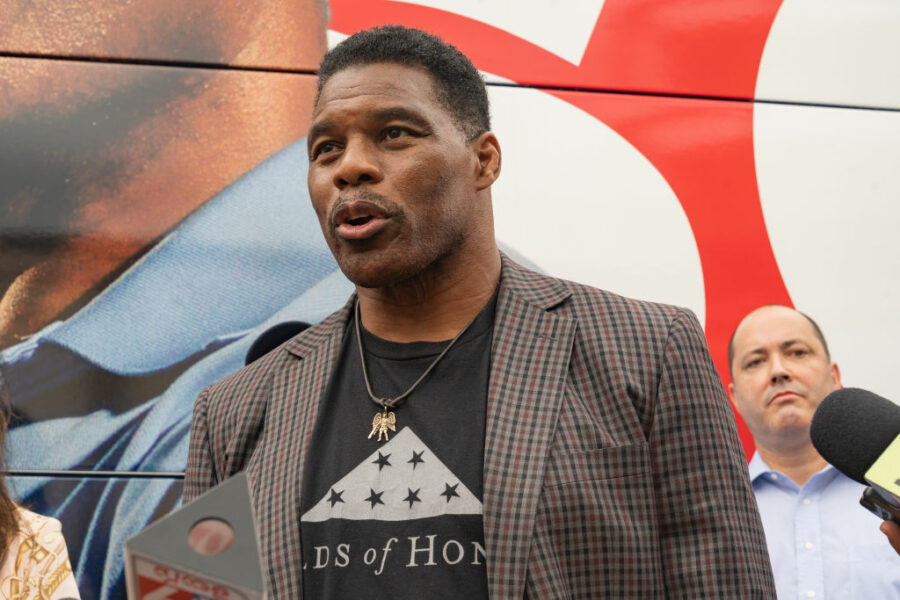 (WASHINGTON) — Less than 24 hours after accusing his father of “destroying” lives following a report in the Daily Beast that an ex-girlfriend claimed Georgia GOP Senate hopeful Herschel Walker paid the cost of her abortion more than a decade ago, Christian Walker has doubled down on his scathing response in a pair of videos on Tuesday.

The younger Walker, an outspoken conservative social media personality and podcast host, accused his father of repeatedly lying throughout the campaign, which also faced reports of Walker’s alleged extramarital affairs and “secret” children months ago.

“I stayed silent as the atrocities against my mom were downplayed. I stayed silent when it came out that my father Herschel Walker had all these random kids across the country – none of whom he raised. And you know my favorite issue to talk about is father absence. Surprise! Because it affected me. That’s why I talk about it all the time. Because it affected me,” Christian Walker said in a video Tuesday morning.

“Family values people? He has four kids, four different women. Wasn’t in the house raising one of them. He was out having sex with other women. Do you care about family values? It was silent lie, after lie, after lie.”

Christian Walker went on to address parts of the Daily Beast’s recent reporting that Herschel Walker reimbursed a woman for the cost of an abortion.

Herschel Walker has denied the reports about affairs and paying for anyone’s abortion. The former football star said he will file a defamation lawsuit against the Daily Beast during an appearance on Fox News Channel’s “Hannity” on Monday.

“I can tell you right now, I never asked anyone to get an abortion,” Walker told Sean Hannity. “I never paid for an abortion — it’s a lie.”

ABC News has not been able to confirm the Daily Beast’s reporting.

“The abortion card drops yesterday – it’s literally his handwriting in the card. They say they have receipts – whatever. He gets on Twitter, he lies about it. OK, I’m done,” Christian Walker said. “Everything has been a lie.”

Hershel Walker is battling against incumbent Democrat Sen. Raphael Warnock in one of the most closely watched Senate races in the country. He’s maintained a staunch anti-abortion position as a candidate, aligning himself with a bill proposed by Sen. Lindsey Graham, R-S.C., that would institute a national ban on most abortions after 15 weeks.

“I am a proud pro-life Christian, and I will always stand up for our unborn children. I believe the issue should be decided at the state level, but I WOULD support this policy,” Walker said after Graham announced the measure.

Christian Walker said he and his mother, Cindy Grossman, had the opportunity to tank his father’s campaign on “day one” – but have opted to stay silent on assurances that Herschel Walker would “get ahead of his past” on the campaign trail. Grossman has accused her ex-husband of threatening to choke and shoot her. She recounted her experience in a 2008 interview with ABC News’ Bob Woodruff.

“We were talking and the next thing I knew,” Grossman said during the interview, “he just kind of raged and he got a gun and put it to my temple."”

Walker said in a 2008 interview that he does not remember the incident, though not disputing the claims. “If I can remember it, I’ll talk about it,” he said.

After retiring from football, according to his memoir, “Breaking Free,” Walker’s mental health and 16-year marriage deteriorated. He discussed the book in a 2008 interview with “Nightline,” telling ABC News that many of his struggles stemmed from what he described as a diagnosis of dissociative identity disorder.

Walker has said that he has made a full recovery and taken responsibility for any past transgressions.

“Herschel addressed these issues in detail with Bob Woodruff 14 years ago — he even wrote a book about it,” Mallory Blount, a spokesperson for the Walker campaign, told ABC News in May. “The same reporters who praised him for his courage are now trashing him because he is a Republican.”

But in his book, Walker does not address several claims about his behavior — some of which are documented in police records. Walker did not write, for example, about allegations that he once held a gun to his ex-wife’s head.

Though a prominent conservative firebrand, Christian Walker has not appeared in a major way with his father on the trail. He said he attended one event with his father last year, but nothing since.

Herschel Walker seldom mentions Christian Walker on the campaign trail. One time of note, however, was when the candidate shared with supporters that he told his son “you’re not that special” before he went to college.

In a follow-up Twitter video, Christian said a litany of Republicans have called him asking him why he isn’t stumping for his father. He claims he told them he isn’t getting involved and refuted commentators who have attempted to extrapolate the relationship between him and his father based on social media posts.

“For certain political pundits to pull up old pictures I’ve posted of my dad thinking they can police and determine my relationship with my dad was…if you want to pull stuff up, I’ll pull stuff up. Don’t try me. Don’t test my authenticity,” Christian Walker said.