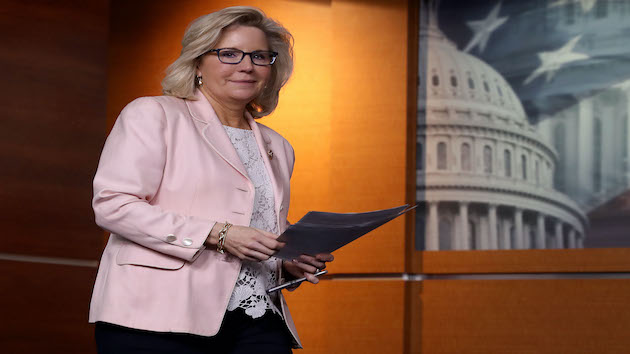 (WASHINGTON) — House Republicans were poised to gather behind closed doors Thursday evening to hear from candidates vying to fill the No. 3 role previously held by Wyoming Rep. Liz Cheney, who signaled in an interview she might run for president in order to keep former President Donald Trump out of the White House.

GOP members are expected to meet behind closed doors Friday morning to elect a new conference chair, with New York Rep. Elise Stefanik remaining the leading candidate, despite some members not satisfied with her conservative credentials.

On NBC’s “Today” show, asked three times if she would run for president to stop Trump from regaining the Oval Office and to “restore” the GOP, Cheney did not rule it out, saying only she would do “whatever it takes.”

“I’m very focused on making sure that our party becomes again a party that stands for truth and stands for fundamental principles that are conservative,” she said. “And I won’t let a former president or anybody else unravel the democracy.”

The daughter of former Vice President Dick Cheney, who faced criticism from within her party for weeks for not furthering the Republican agenda by calling out Trump, tweeted a clip of the interview Thursday, but notably framed her agenda as an anti-Biden one.

“Our vision for the future has to be based on policy and substance, and to do that we must embrace the truth,” the caption said.

The Wyoming representative, who said she is “absolutely” running for reelection to the House in 2022, also said Minority Leader Kevin McCarthy “is not leading with principle right now,” calling his example “sad” and “dangerous.”

While Stefanik, who has pushed Trump’s “big lie” and challenged results to the 2020 election, remains the frontrunner candidate to replace Cheney as the new conference chair, some conservatives critical of her record are pushing to delay the vote and find an alternative nominee with a less moderate history. Stefanik is meeting with members of the conservative Freedom Caucus Thursday in an attempt to address those concerns.

At least one conservative Republican, Rep. Chip Roy of Texas, appears to be weighing whether he’ll challenge Stefanik, with his team telling ABC News on Wednesday, “This must be a contested race — not a coronation.”

Any House Republican is allowed to enter the race, but already carrying Trump’s support and the endorsement of GOP leadership, Stefanik has told Capitol Hill reporters she’s confident she has the votes needed to be elected conference chair, even if someone else jumps in the race.

While McCarthy, who endorsed Stefanik on Sunday, has branded the removal of Cheney from her leadership post as an issue of unity, the party stripping her of the position may prove more ineffective in perpetuating that message — as Cheney can now use her microphone to criticize Trump without the confines of a leadership position. She’s expected to sit down for more interviews in the coming weeks.

Cheney’s ousting and Stefanik’s ascension come as it’s more mainstream in the Republican Party — though no less false — to take up the view that the election was “rigged” and recast the Capitol attack as having nothing to do with the former president.

At a House Oversight and Reform Committee hearing Thursday on Capitol Hill, the site of the insurrection, several congressional Republicans downplayed the threat of the Jan. 6 rioters in an attempt to rewrite history. Georgia Rep. Andrew Clyde likened the event to “a normal tourist event” and Arizona Rep. Paul Gosar, who has constantly promoted false claims the election was stolen, accused the Justice Department of “harassing peaceful patriots around the country.”

Cheney, on Thursday’s interview, expressed support for a commission to look into the events leading up to Jan. 6 and suggested those in the GOP who don’t support one may be hiding something.

While Wednesday’s hearing was underway, shortly after Cheney was ousted from leadership, McCarthy told White House reporters, “I don’t think anybody is questioning the legitimacy of the presidential election. That’s all over with.”

“Inside this conference, to do the conference chair job is about the messaging going forward. This has nothing to do about how somebody voted,” he continued. “This is simply who’s best at delivering the message.”

Stefanik, likely to deliver that message, was among the 147 Republicans who voted to overturn election results and defended questioning results in a floor speech after the Capitol attacK. She has expressed full support for the controversial Republican-backed audit of election results in Arizona, which election experts have worried will further undermine confidence in the electoral process.

Notably, in Stefanik’s public pitch to her colleagues for the position released Thursday, she made no mention of the former president or the 2020 election.