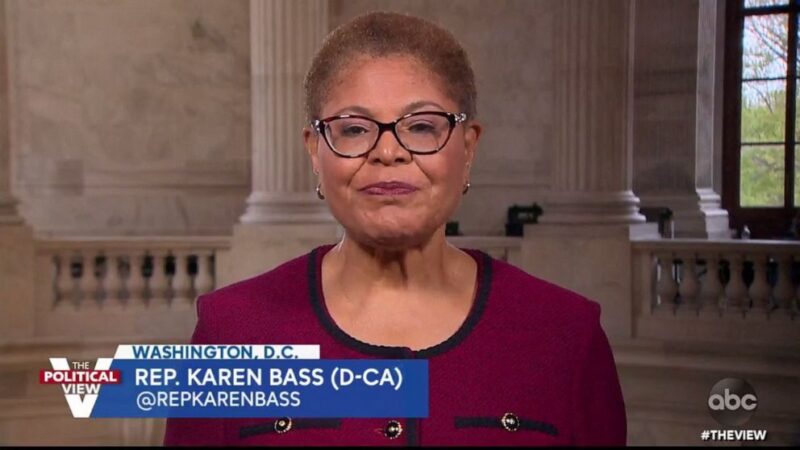 (WASHINGTON) — The House Democrat playing a key role in negotiations over policing reform in Congress, said Thursday she feels “tremendous positive momentum” that a bill will be passed in the wake of the Chauvin verdicts earlier this week.

“I will tell you we’ve been having conversations all along and I feel very positive after the energy from this trial and the success of the verdict that we’re going to be able to get this across the finish line and soon,” Rep. Karen Bass, D-Calif., told the hosts of ABC’s “The View,” predicting the case “will be” a tipping point.

Bass is one of the leading sponsors of the George Floyd Justice in Policing Act, legislation that passed the House in a party-line vote in early March. The bill includes national standards for police departments, mandates for data collection on police interactions, and changes federal laws for prosecuting use of excessive force. The bill also would ban police chokeholds and no-knock warrants for federal law enforcement.

When asked by “The View” co-host Sunny Hostin what she sees as her top priorities, Bass said she wants to end “qualified immunity” for individual police officers, a big sticking point for Senate Republicans who say it would hurt officers from doing their jobs.

“Qualified immunity, as you mentioned, the ability to sue an officer, holding officers accountable, so the ability to prosecute an officer because even the prosecution of Derek Chauvin was unusual,” Bass said.

Bass, who is Black, has been holding talks behind the scenes with the Senate’s only Black Republican, South Carolina Sen. Tim Scott, trying to find common ground on the issue.

She said the Chauvin case should make a difference.

“I do hope that it puts police officers on notice that the blue wall was cracked,” Bass said. “It was incredible to see the officers come forward and testify because you’re right, that never happens. But that’s not going to be enough.”

Bass said that she is committed to “raising the standards of policing.”

Although the bill is stalled in the Senate, there has been some movement. For example, Sen. Dick Durbin, D-Ill., the chair of the Senate Judiciary Committee said on Tuesday that he would hold hold a hearing on policing reform next month and some Republicans have expressed a willingness to compromise on legislation.