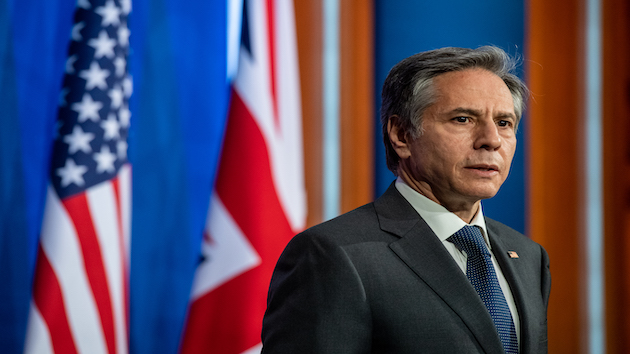 (WASHINGTON) — Secretary of State Antony Blinken said on ABC’s “This Week” that Thursday’s cease-fire was “critical” to putting the United States in a position “to make a pivot to building something more positive,” placing a heavy emphasis on the need for a two-state solution for the region.

“That has to start now with dealing with the grave humanitarian situation in Gaza. Then reconstruction, rebuilding what’s — what’s been lost. And critically, engaging both sides in trying to start to make real improvements in the lives of people so that Israelis and Palestinians can live with equal measures of security, of peace and dignity.” Blinken told “This Week” anchor George Stephanopoulos on Sunday.

The Biden administration’s top diplomat underscored the president’s commitment to a two-state solution for Palestine and Israel as the “only way” forward for the region, but noted that would not happen immediately.

“Look, ultimately, it is the only way to ensure Israel’s future as a Jewish and democratic state and, of course, the only way to give the Palestinians the state to which they’re entitled. That’s where we have to go,” Blinken said.

“But that, I don’t think, is something for — necessarily — for today,” he continued. “We have to start putting in place the conditions that would allow both sides to engage in a meaningful and positive way toward two states.”

But Blinken stressed that if that positive engagement was not met, the cycle of violence was likely to continue.

The cease-fire came after nearly two weeks of violence between Israel and Hamas that left more than 250 dead and hundreds more injured. It has held throughout the weekend.

Blinken plans travel to the region in the coming days and will meet with Palestinian, Israeli and regional counterparts to discuss relief efforts.

Stephanopoulos also pressed Blinken on the administration’s plan to deliver humanitarian aid to Gaza following the violence without aiding Hamas.

Blinken stressed the U.S.’ past work with “trusted independent parties,” to help with reconstruction in Gaza, adding the challenge would be to empower Palestinian Authorities.

“The fact of the matter is Hamas has brought nothing but ruin to the Palestinian people. Its gross mismanagement of Gaza while it has been in charge, and, of course, these indiscriminate rocket attacks on Israeli civilians which have elicited the response that they did because Israel has a right to defend itself,” Blinken replied.

“Does the United States have to accept that North Korea will remain a nuclear power? Do we have to learn to live with a nuclear North Korea?” Stephanopoulos asked,

“We don’t and we shouldn’t,” Blinken replied. “But let’s be — let’s be honest, this is a hard problem. Previous administrations — Republicans and Democrats alike — have tried to tackle it and no one has fully succeeded. And in fact the program has gotten more advanced and more dangerous over time.”

Blinken highlighted the Biden administration review of North Korean policy, stressing the President is willing to engage diplomatically even with sanctions still in place.

“I don’t think there’s going to be grand bargain where this gets resolved in one fell swoop. It’s got to be clearly calibrated diplomacy, clear steps from the North Koreans and it moves forward in that way,” he said. “Now we’ve put that forward. We’re waiting to see if Pyongyang actually wants to engage. The ball’s in their court. “