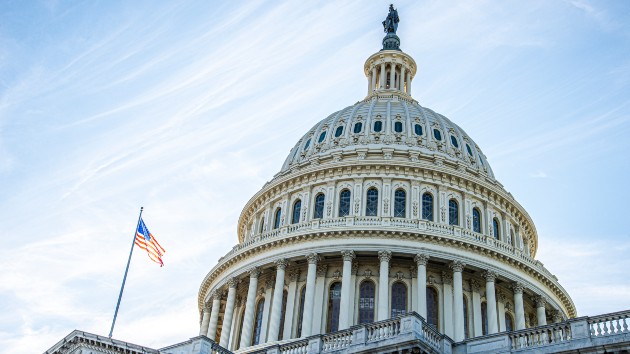 (WASHINGTON) — The first time Harry Dunn stepped inside the U.S. Capitol also happened to be his first day as a Capitol Police officer.

“The rotunda … you just look up and it just goes up forever — it’s just an amazing architectural building,” Officer Dunn told ABC News’ Chief Justice Correspondent Pierre Thomas. “It’s hard to not be in awe of it when you see it.”

Dunn said the rotunda no longer resembled the room he once knew on Jan. 6, the day of the siege on the Capitol.

“This time you look up, it’s just a cloud of smoke, fire extinguishers have been going off,” Dunn recalled walking into the room soon after fighting off a mob of angry rioters. “The floors are covered in white dust, water bottles, broken flagpoles, mask, empty canisters of pepper spray, helmets, Trump flags, everything in the rotunda, just laying there on the floor.”

Dunn recalls gasping for air through the pepper spray and bear mace, blood on his knuckles and the relentless noises from the rioters. He soon found himself in tears, being consoled by a fellow officer who asked him what had happened amidst the chaos.

“’I got called a [N-word] a couple dozen times today protecting this building,’” Dunn recalled telling his colleague. “Is this America? They beat police officers with Blue Lives Matter flags. They fought us, they had Confederate flags in the U.S. Capitol.”

The exclusive interview will air Monday morning on ABC News’ Good Morning America and next Tuesday at 10 p.m. ET on a new ABC News primetime magazine called Soul of a Nation, a series that examines the Black lived experience in America.

“Is this America?” said Rep. Raskin, echoing Dunn’s words on the Senate floor.

“It took me back to a dark place because I didn’t say it for a catchphrase — I wasn’t trying to create a slogan,” said Dunn. “I struggle… should I be proud? No, not at all.”

Dunn does not know if his words were effective during the trial, but he wishes they did not have to be said at all.

“Those were my feelings and that was my truth — it wasn’t a proud moment. It took me back to a dark place,” he said.

Dunn does not mince words when describing the pro-Trump rioters who stormed the Capitol.

“They were terrorists,” Dunn told ABC News. “They tried to disrupt this country’s democracy — that was their goal… And you know what? Y’all failed because later that night, they went on and they certified the election.”

Dunn praised his fellow officers, including officer Brian Sicknick, who died during the insurrection — describing him as a “brave” and “dedicated officer.” Dunn also lent praise to officer Eugene Goodman, whose heroics were caught on camera that day.

The Capitol Police Department has fallen under scrutiny since the attack. Many are questioning whether there was a lack of preparedness and the actions taken, or not taken, from top management in the days and moments leading up to the Jan. 6 attack.

Pittman is scheduled to appear before a House Appropriations Committee on Thursday.

“Everybody wants to know what could have been done differently, because that shouldn’t have happened,” said Dunn. “[I’ll] wait for the investigation to be completed officially and not draw conclusions about something of this magnitude — I’ll just leave it at that.”

Threats to Congress decreased after record high in 2021, but are still concerning: Police

Treasury secretary says US to hit debt limit on Jan. 19

Perry won’t recuse himself from possible GOP investigation of Jan. 6 probe investigating him