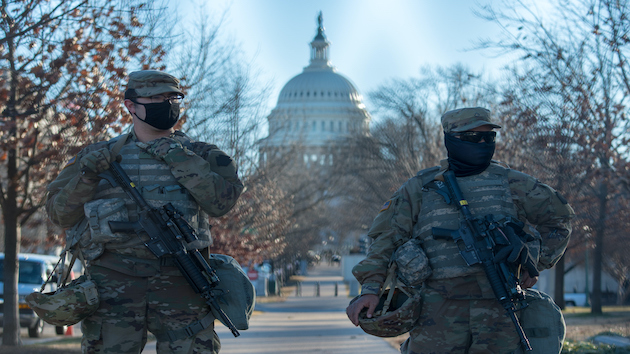 (WASHINGTON) — Congress needs to balance making the Capitol complex secure, while at the same time maintaining its openness to the public, Sen. Roy Blunt, R-Mo., said Sunday on ABC’s “This Week” days after a knife-wielding man rammed his vehicle into a U.S. Capitol barricade, killing a Capitol Police officer.

“I don’t think it does the job. In fact, the fencing was right there when the car drove through,” the senator told “This Week” anchor George Stephanopoulos.

“I think it would be a mistake for fencing to be a permanent part of the Capitol,” Blunt added.

The fatal incident on Friday occurred less than three months after the Jan. 6 storming of the U.S. Capitol that left five people dead.

Blunt also cited retired Lt. Gen. Russel Honoré, who led a review of the security failures at the U.S. Capitol in January and told lawmakers that fencing can create a false sense of security.

“The idea that what happens next at the Capitol will be what happened last is almost certain not to be the case,” Blunt said Sunday.

In a separate interview on “This Week,” Stephanopoulos asked Honoré about the timing for removing the fencing put up after the Jan. 6 riots.

“You say we’re trying to balance security and accessibility. We know that many members of Congress have called for the permanent fencing to come down after the Jan. 6 siege. Did it start to come down too soon?” Stephanopoulos asked.

“I don’t think so, George. The fencing and people we were seeing were a result of post-1/6, as well as preparation for the inauguration. It never came down because there was a lot of threat messages that came in for potential activity on 4 March,” he said.

The retired lieutenant general said the scaling back of the permanent fencing perimeter around the complex was in line with a reduction of threats aimed at the complex.

And although Honoré agreed the Capitol is increasingly becoming a target, he said, “From inside the Capitol, talking to many members of Congress on both the Senate and the House side, both parties, they all left us with the impression their number one mission is to secure the Capitol, but make sure it has 100% public access.”

Blunt is leading a bipartisan effort to investigate the riots and he has co-sponsored a bill with Sen. Chris Van Hollen, D-Md., and District of Columbia Del. Eleanor Holmes Norton to prevent the use of permanent fencing around the Capitol. Among the suggestions in the security review is a fence that could be quickly erected as needed.

“We’ve given them recommendations, the Corps of Engineers is standing by to reinforce the outer grounds of the Capitol with contractors coming in to put advanced fencing that can come out of the ground as required,” Honoré said.

He also stressed that the most important solution to improving security at the complex is to increase the number of Capitol Police officers and provide them with additional funding through a supplemental budget.

“It’s time for Congress to work the plan. We gave them the plan. We worked hard to give it to them. Now they’ve got to work to make that plan come through,” Honoré told Stephanopoulos.

“The police in the Capitol deserve this. Our nation deserves it. And those families who have lost loved ones deserve it. And we need to up our game in support of the Capitol Police,” Honoré continued.

Blunt agreed with most of Honoré’s assessment but pushed back on increasing the size of the Capitol Police force.

The debate over providing more money to the Capitol Police comes as Congress prepares to take up a $2 trillion initiative on infrastructure proposed by President Joe Biden on Wednesday. With Republicans already expressing opposition to the package, Stephanopoulos asked Blunt why the GOP would resist spending that is popular with the public.

“Your leader, Mitch McConnell, has already signaled Republicans are going to oppose those proposals. But polls show that investing more in roads, bridges, high-speed rail, broadband is widely popular. Any worry that the GOP is on the wrong side of this issue?” Stephanopoulos pressed.

“Well, I’m actually for all of that. If the proposal was to do just that, I don’t think there’d be a problem with the bipartisan group of supporters for this package,” Blunt responded. “I’ve reached out to the White House a couple of times now and said, you’ve got an easy bipartisan win here if you’ll keep this package narrowly focused on infrastructure.”

Blunt said one of the problems he has with the bill is that it provides more funding to electric charging stations than roads, bridges and airports.

“I’ve got a lot of respect for Sen. Blunt, but I’m going to work to try to persuade him that electrical vehicle charging infrastructure is absolutely a core part of how Americans are going to need to get around in the future, and not the distant, far-off future, but right now,” Buttigieg said on “This Week.”

Stephanopoulos also challenged Blunt on Republican opposition to how Biden plans to fund the bill.

“The Republicans are against the tax increase and corporate tax increase that President Biden is proposing, raising it back to 28%, which is still below where it was before President Trump’s tax cuts. The stock market is booming now. Corporate stocks are up. So, isn’t this a good time to invest some of those profits in the future?” Stephanopoulos asked.

Blunt said that the Democrats’ proposal to raise the corporation tax could negatively impact businesses looking to bring jobs back to the U.S.

“As businesses are thinking about resourcing and bringing things back to the United States — restructuring how their companies are put together — the corporate tax is an important element of that,” the senator said.

Additionally, Blunt pointed out the unlikeliness that any Republican senator would vote for raising the corporation tax just four years after passing legislation that lowered it.

“Every Republican in the Senate who was there in 2017 voted for the 2017 tax bill. To ask them to turn around, and within less than four years, turn that around is a very unlikely thing to happen,” he added.