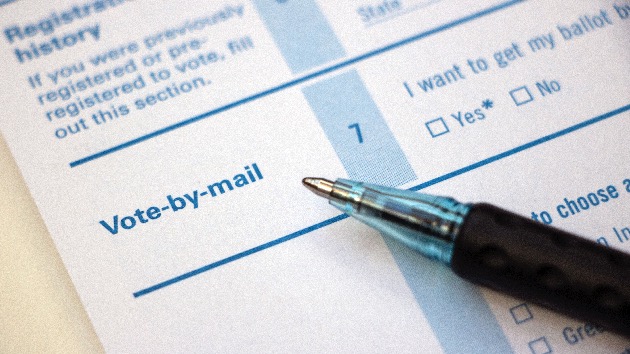 (NEW YORK) — When the Vermont legislature voted to mail ballots to every active voter for the pandemic general election, state Sen. Joe Benning, a Republican, was not on board. Neither was his local town clerk, also a Republican.

“Not that either one of us believed there’s going to be widespread fraud but certainly [it] invited the opportunity by placing all of these live ballots out in the world with no restrictions,” Benning told ABC News.

But then, he said, “a funny thing happened.”

It was the election. The ballots did go out to active voters. Vermont, like the nation, saw record turnout.

“I ended up with more votes than I had ever received before,” Benning said. “I attribute that to the fact that a whole lot of Republican voters who had been complacent about going to the voting booth, suddenly had a live ballot sitting on their kitchen table, and they decided to use it.”

That, plus the lack of widespread fraud claims, which Benning said “was examined quite heavily,” changed his mind.

“There just wasn’t any reason to look at it in any other way than to say it was providing more people with the opportunity to vote,” he said.

Election integrity has become a core issue for the GOP following the 2020 election, which former President Donald Trump still claims was fraud-filled and illegitimate, an accusation there is no evidence to support. States’ 2021 legislative sessions have brought a national trend of GOP lawmakers passing bills they say make it “easy to vote, hard to cheat.” Democrats and activists decry them as voter suppression tactics.

Vermont’s Republican governor, Phil Scott, has bucked the GOP before. He voted for President Joe Biden and called on Trump to resign after the Jan. 6 insurrection. But on Monday, he did it again, breaking with the national trend of Republicans enacting legislation that rolls back mail-in voting by not only signing into law a bill that makes Vermont a universal vote-by-mail state for general elections, but calling on the legislature to take it even further next session and make it so active voters receive ballots by mail for every election.

Four of the seven Republican state senators voted for the legislation. About a third of the House Republican conference did, too.

It’s not the first bipartisan voting reform of the 2021 legislative sessions. Kentucky enacted a law that adds three days of early voting and establishes vote centers where any elector in a given county can cast ballots. But the amount of Republican support in Vermont is notable, especially compared to Nevada, a state Trump contested in 2020 that also passed a bill this session making it a universal vote-by-mail state.

But, unlike in Vermont, not a single Republican legislator in the battleground supported it.

“I don’t really understand why Republicans are all that opposed to it. … It just works,” Republican state Sen. Corey Parent, who also supported Vermont’s bill, said. “Like with anything you just have to have a little bit of trust and if we find there to be issues, we can always address those when the time comes. But let’s not do something because we’re afraid of the ‘what-ifs."”

Like the governor, Parent wants to see this expansion go further, and apply to all elections in Vermont.

In local March elections, it was up to each city and town whether to mail ballots to all active voters. Like Benning, Parent saw the difference.

To both Benning, 64, and Parent, who is only 31 but has been a state lawmaker for seven years, today’s Republican Party is unrecognizable.

“I developed a new name for it. It’s called TORC: Trump Only Republican Cult,” Benning told ABC News. “I think it is one of the most divisive concepts now in the Republican Party.”

He became a Republican based on principles like belief in the Constitution, less taxes, smaller government, secure borders, strong defense — “that live and let live attitude.”

“It was the glue that stuck people together, and the glue is changing,” he said. “And it’s not leaving me comfortable. There should not be a litmus test for any one individual.”

Parent pointed to Republicans like Scott and Massachusetts Gov. Charlie Baker, who called on Trump to “step down” after Jan. 6, as members of the party who are “telling a different story,” and trying to return the party to its roots.

Asked about the sizable portion of Republicans who broke with the national trend when supporting Vermont’s legislation, Parent attributed that to Vermont having “always been a state that’s bucked the national trend,” citing outlawing slavery before it was even a state and rejecting Franklin Delano Roosevelt in every presidential election.

“People can come and talk to me about issues and their concerns and they see us in the grocery stores,” he said of politics in his state. “It’s not about trying to achieve a national narrative. It’s about doing what’s right for our neighbors, making sure their voices are heard and the government works for them.”