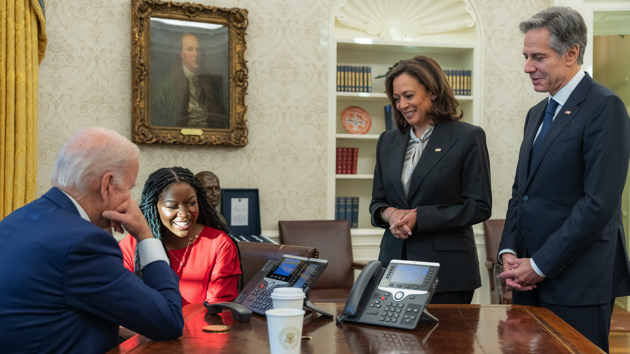 (WASHINGTON) — The White House on Thursday disclosed additional details about how President Joe Biden and administration officials were able to secure WNBA star Brittney Griner’s release and return from Russia.

White House spokesperson John Kirby told reporters that the deal “really came to fruition in the last week or so.”

Biden made the call to go ahead with the swap “last week,” he said.

But the deal was the product of months and months of a painstaking negotiation effort from across the U.S. government, including officials at the highest levels engaging directly with Russia.

Here’s the inside story of how it happened:

When was Griner released?

Secretary of State Antony Blinken said over the summer that the U.S. had made a “substantial offer” to Russia for the release of Brittney Griner and Paul Whelan, but that Russia rejected that offer.

Both sides finally reached an agreement in recent days, according to the White House, and Biden made the difficult decision to accept a deal with no Whelan exchange in order to get Griner home.

A senior administration official said on Thursday morning that the release came together within the last 48 hours.

“In recent days, we were able to reach agreement on an option to secure Brittany’s release. And the president, President Biden, made the difficult decision to accept that option because it resulted in a safe return home of an American,” the official told reporters. “Through multiple, multiple engagements, the Russians made clear that the only route to securing Britney’s return was a release of a Russian national, Viktor Bout.”

Bout, a Russian arms dealer, was extradited to the U.S. and convicted in 2011 of conspiring to supply weapons that could be used to kill Americans. As the exchange neared, Griner was moved from a penal colony to Moscow and then to the United Arab Emirates.

“In the last 48 hours, as this had all come together, Brittney was moved from the penal colony where she was being held to Moscow, and this morning, she was brought to the United Arab Emirates, where she was met by U.S. officials,” the official said.

Roger Carstens, the Special Presidential Envoy for Hostage Affairs, greeted Griner on the tarmac upon her release, specifically to let her know that he was there to bring her home and was there on behalf of the president and Secretary Blinken, an official said. They described Griner as “in an extremely upbeat mood, all smiles and extremely grateful.”

From the tarmac, Griner spoke on the phone with Biden and wife, Cherelle Griner.

Who was involved in the exchange?

The Saudi government on Thursday issued a joint statement with the UAE about their alleged role in the Griner prisoner swap, claiming Saudi Crown Prince Mohammed bin Salman led a mediation on the successful exchange, but U.S. officials have categorically denied the claim.

“This was a deal done by the U.S. government,” Kirby repeated several times to White House reporters. “We spoke with many different interlocutors to involve some foreign governments who had ideas and concepts and thoughts… but this deal was brokered by the United States government,” he added.

A senior administration official, on an earlier call with reporters, thanked former New Mexico Gov. Bill Richardson, who for months tried to help negotiate a trade for Griner and Whelan, but the extent of his involvement in Griner’s ultimate agreement was not clear.

“I also want to thank those outside government who have engaged with us constructively and worked to improve Griner’s conditions while detained and to support government efforts to reach this result, including Governor Bill Richardson, as well as a number of others who have shown a great deal of care and concern about this case,” a senior administration official said. “There is gratitude from the government to outside advocates who raised their voices in support of Brittney, like Governor Richardson, who tried to be constructive in keeping us informed as to how they were thinking about the matter.”