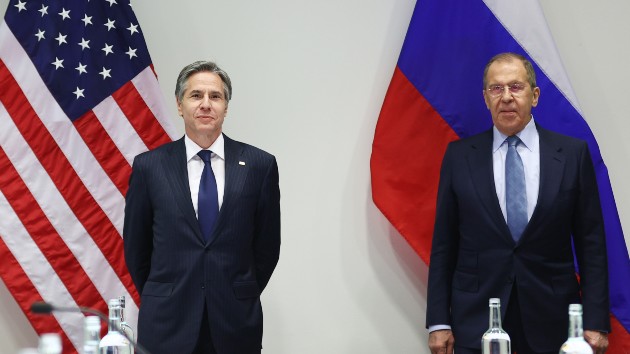 (WASHINGTON) — In their first meeting, Secretary of State Antony Blinken and Russian Foreign Minister Sergey Lavrov both discussed a desire to find ways to work together and advance areas where there are mutual interests — a warmer tone than relations between the two nuclear-armed powers in recent years.

Their meeting laid the groundwork for an expected meeting between President Joe Biden and Russia’s Vladimir Putin next month.

It also came the same day that Blinken waived sanctions on a German firm and its executive, building a Russian-backed pipeline called Nord Stream 2, despite saying the administration would do all it could to block its completion. The decision to waive sanctions, while targeting several Russian vessels and firms working on the pipeline, enraged Republican and Democratic lawmakers, who mandated such sanctions in a law on Jan. 1.

The two top diplomats shook hands before the cameras and even shared a laugh over the pack of press assembled for their meeting. While their diplomatic niceties paper over deep differences and a real low point in U.S.-Russian relations, the possibility of a Biden-Putin meeting seems to have both sides interested in resolving some issues.

Both men cited the opportunity to work together on nuclear arms control, the nuclear programs of North Korea and Iran, and peace in Afghanistan.

“Our task is to make the best of the diplomatic opportunities that we have, and we are glad to see that you are demonstrating such an approach,” Lavrov told Blinken, calling for dialogue that is “honest, factual and with mutual respect.”

Lavrov also specifically mentioned the crippling restrictions on diplomats serving in both countries. Russia has barred Russian citizens from working for the U.S. embassy and consulates and expelled so many diplomats in recent years, together making it very difficult for the U.S. to provide consular services in the country, such as visas.

While Biden ordered the expulsion of some Russian diplomats last month, the Trump administration expelled dozens throughout former President Donald Trump’s term. Lavrov blamed “this great workload” on the “previous” U.S. administration, but called for “building bridges and improving relations,” he said in Russian, with a translator speaking in English.

Blinken reiterated the Biden administration’s talking points that the U.S. will respond when it and its allies are attacked or threatened by Moscow, just as Biden has sanctioned dozens of Russian officials and entities for its SolarWinds hack, its interference in the 2020 U.S. elections, its continued aggression against Ukraine, and its use of a chemical weapon to try to assassinate Russian opposition leader Alexei Navalny.

But Biden’s team doesn’t want to “escalate or seek conflict,” he added, saying they seek a “predictable, stable relationship” for the good of the Russian and American people and the world.

After they finished their opening remarks, aides started to usher reporters from the room. Lavrov joked in English, “Nobody is shouting. Nobody is asking questions.”

“It’s a slow night in Reykjavik,” Blinken retorted, referencing the Icelandic capital where they were meeting on the sidelines of the Arctic Council summit.

The two delegations shared a laugh, and as reporters started to shout questions, Blinken joked Lavrov made “a mistake” in mentioning questions. Both ignored those questions, including about Nord Stream 2.

The U.S. has accused Russia of building the pipeline to undermine Poland and Ukraine by sending natural gas directly to Germany. While America’s critical ally Germany supports its construction, the U.S. has opposed it for giving Russia increased leverage over Europe’s energy needs and threatening Eastern European partners.

Under law, the State Department is required to send a report to Congress every 90 days about the pipeline’s progress — now at some 95% complete — and about U.S. sanctions meant to stop it.

In their latest report Wednesday, however, the State Department informed Congress it is sanctioning several Russian ships involved in construction, but using a waiver built into the law to avoid sanctions on the German pipeline company and its German executive, who has close ties to the Kremlin.

Blinken acknowledged in the report that the company and executive were in violation of U.S. law, but waived penalties on them anyway — a decision the top Republican on the House Foreign Affairs Committee Rep. Michael McCaul, R-Texas, called “absolutely ridiculous.”

In a statement released as he and Lavrov were meeting, Blinken defended himself saying, “Our position is in line with our commitment to strengthen our Transatlantic relationships as a matter of national security.”

But his move enraged not just Republicans, but even some Democrats on Capitol Hill, including the Democratic chair of the Senate Foreign Relations Committee Bob Menendez. In a statement, he urged the administration to “rip off the Band-Aid … and move forward with the congressionally mandated sanctions.”

That remains unlikely for the time being. Blinken repeated the administration continues “to oppose the completion of this project” that the U.S. considers a “Russian-maligned influence project,” as State Department principal deputy spokesperson Jalina Porter said Wednesday. But they don’t want to harm relations with Germany after four years of tensions under Trump.

German Foreign Minister Heiko Maas, who spoke to Blinken Tuesday night by phone, welcomed the decision, telling reporters it was a “constructive step that we will gladly continue to discuss with our partners in Washington.”