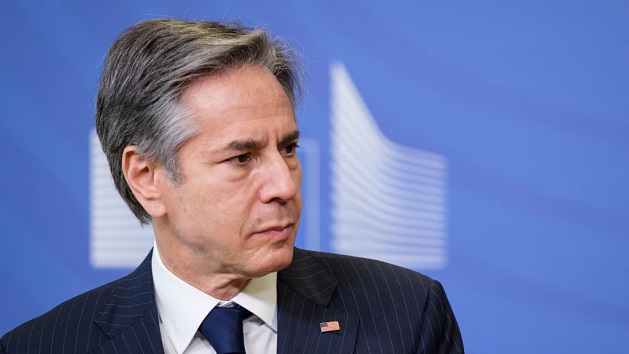 (WASHINGTON) — As Russian forces continue to advance across Ukraine, the U.S. is accusing the Kremlin of “starving” besieged Ukrainian cities, in the words of Secretary of State Antony Blinken, who on Monday appealed directly to Russian leader Vladimir Putin to “end the war, end it now.”

But amid calls like his, the Ukrainian government, led by President Volodymyr Zelenskyy, is urging U.S. and Western leaders to do more — beyond condemnations and the historic amount of defensive aid and provide warplanes, missile defense systems, and a no-fly zone.

U.S. allies in the Baltics are increasingly nervous about Putin’s advances in Ukraine, with Lithuania’s president warning Monday that the strongman leader “will not stop.”

Blinken’s visit is meant to reassure these NATO allies that the U.S. will defend “every inch” of member states’ territory, as he reiterated Monday — stopping short of promising to make permanent any U.S. military deployments to the region.

Over 1.7 million Ukrainians have now fled the country from invading Russian forces, shelling and bombing cities across Ukraine and killing at least 406 civilians, according to the United Nations, which warned the actual figures are “much higher.”

After noting that huge spike in refugees, Blinken said alongside Latvian Foreign Minister Edgars Rinkēvičs, “Many more people are trying to flee, but they cannot get out of besieged areas. … Women and children, the elderly, wounded civilians, people with disabilities are trying to escape cities where there’s no heat, no electricity, and where they’re running out of food and medicine and there continue to be reports of attacks by Russian forces on agreed-upon humanitarian corridors.”

Russia has denied that its forces have violated ceasefires over the weekend, but those claims were proven false by their continued shelling in cities like Mariupol in the south.

“That siege affected millions of Russian families, including President Putin’s, whose one-year-old brother was one of the many victims. Now, Russia is starving out cities like Mariupol. It is shameful. The world is saying to Russia stop these attacks immediately. Let the food and medicine in. Let the people out safely, and end this war of choice against Ukraine,” he said.

Putin’s older brother Viktor died of diphtheria during the siege of Leningrad before Putin was born. Putin has claimed his “special military operation” in Ukraine is about “de-Nazifying” the country’s government, a lie that Holocaust museums and memorials have denounced as warping history — including the Babyn Yar memorial in Kyiv that was damaged by Russian shelling.

Blinken has previously invoked his own family history to condemn Putin’s claim, as his stepfather was renowned writer and lawyer Samuel Pisar, who survived the Holocaust.

The top U.S. diplomat’s quick tour through the Baltic countries — Estonia, Latvia, and Lithuania — is meant to reassure these nervous NATO allies right on the frontlines of the war that the U.S. will defend them in the face of Russian aggression.

That anxiety is apparent. Standing with Blinken, Lithuanian President Gitanas Nauseda made a strong appeal earlier on Monday.

“Antony, deterrence is no longer enough, and we need forward defense here in place because otherwise it will be too late here, Mr. Secretary. Putin will not stop in Ukraine. He will not stop. It is our collective duty and obligation to help Ukraine with all means available and when I say all, I mean all means available if we want to avoid the Third World War. The choice is in our hands,” he said during a photo op with Blinken.

That “forward defense” means permanent deployment of U.S. forces. Latvian Foreign Minister Rinkēvičs made a similar public request, saying his country “would like to have permanent solutions to this,” but he smiled and said they ultimately defer to the U.S.

Blinken made clear that no decision had been made yet on that, instead pointing repeatedly to the U.S. reinforcements that have arrived in recent weeks, including U.S. troops and the advanced F-35 fighter jets.

The Biden administration is “on a regular basis reviewing the global posture of our forces to include of course here in Europe and we have to factor in any developments, any changes in the threat, and we will do that,” Blinken added.

To those nervous smiles, Blinken also reiterated what Biden has said repeatedly: “We will defend every inch of NATO territory against aggression coming from anywhere at any time. Our commitment to Article 5 — an attack on one is an attack on all — is ironclad. The president has called it sacrosanct. And no one — no one — should have any doubt about that.”

But stopping that umbrella at protection at NATO’s borders has been condemned by Zelenskyy and other Ukrainian leaders.

“We believe that the rejection of the idea of the no-fly zone is based in the lack of confidence in the strength of NATO as an alliance,” Ukrainian Foreign Minister Dmytro Kuleba, who met Blinken on Saturday at the Polish-Ukrainian border, told ABC’s “Good Morning America” Monday.

“The military might of NATO is incomparably bigger compared to Russia, so why would Russia dare to shoot down a NATO plane, knowing it is doomed, eventually doomed, if a war with NATO begins?” he added.

But that’s precisely why, Blinken said, the Biden administration opposes a no-fly zone.

Blinken also met with Israeli Foreign Minister Yair Lapid in Latvia’s capital after Israeli Prime Minister Naftali Bennett’s trip to Moscow over the weekend, saying the U.S. appreciate “all efforts by friends and allies to look for a diplomatic resolution.”

To that end, he has added a stop in Paris on Tuesday to meet French President Emmanuel Macron, who has also tried to play a mediating role.

Blinken declined to comment on either country’s efforts to reach out to Putin, but added, “There’s certainly no change in our message to Moscow, to Russia, to President Putin: End the war. End it now.”