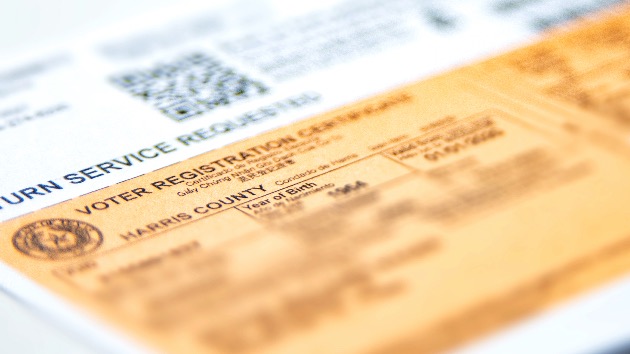 (OAKWOOD, Texas) — As voters across Texas submitted voter registration applications on Monday, Oct. 4, ahead of the Nov. 2 statewide election, 82-year-old Elmira Hicks was left out.

The Oakwood, Texas, native hasn’t been able to renew her voting license for more than a year because she has been unable to present the required birth certificate needed to verify her identity.

Hicks does not have a passport and without her driver’s license or the other approved documents, she said she will face obstacles that will make it difficult for her to participate in state and federal elections as a rural resident with limited transportation.

“My ability to get a license is completely impossible. They’ve completely shut me down,” Hicks told ABC News. “I can’t vote without proper identification. My voice does not count. It’s very important. People have died just to vote, people have stood in line, in the rain, women fought to vote and now I can’t vote,” Hicks added.

Like many Black elders in the South, Hicks was born with the help of a midwife, at a time when records weren’t kept. She never had a birth certificate. Her daughter, Jonita White, has helped her apply for one. The pair battled in court over the issue. A judge even ruled in their favor. Still, they said the Office of Vital Statistics has rejected Hicks on a technicality.

“I do feel like the laws right now are targeting my mother and other African Americans in this country,” White said.

Eight constitutional amendments ranging from taxes to judicial eligibility will be up for a vote on Nov. 2, an election Hicks will not be able to participate in.

Advocates warn that potentially thousands of predominantly minority voters could be disenfranchised due to voter identification requirements, which could have a large implications during next year’s midterm elections for state and congressional races.

“It’s often very common for people of a certain age not to have a birth certificate. I want to emphasize it’s not as uncommon as people might believe,” said Franita Tolson, the vice dean for faculty and academic affairs and a professor of law at the University of Southern California Gould School of Law.

“In this country, race correlates to a lot of different characteristics. So, for example, if you take voter identification laws … people of color, so African Americans, Latinos, will be less likely to have the underlying documents that you need in order to get the ID in the first place in order to get a driver’s license,” Tolson continued.

Texas recently passed the Election Integrity Protection Act, one of the most restrictive voting laws in the country. It bans drive-thru voting, enlists new regulations for early voting and enacts new ID requirements for mail-in voting.

While Tolson does not believe all voter identification requirements are discriminatory, she called Texas’ voter ID measures “racist” during a Congressional Subcommittee hearing, because she believes they disproportionately impact voters of color.

“Texas has a very restrictive voter ID law,” Tolson said. “If you read it, it doesn’t seem racist on its face, but if you think about how it operates in practice, as well as the intent behind it, it is fairly racist. For example, Texas’ law only allows voters to have a certain limited amount of IDs. You have to have a driver’s license, you can have a hand handgun license, you can have a military ID, but you can’t have a federal ID, or you can’t have a student ID, which are the types of IDs that people of color are more likely to have.”

Rep. Steve Toth R-Texas, vehemently disagreed with Tolson’s claim that the state’s election laws are discriminatory, telling ABC News that the latest legislation makes it easier for people to vote and harder to commit fraud.

Nationally, there is bipartisan support for voter identification requirements among the majority of Americans, and 62% of Democrats support photo ID requirements, along with 87% of Independents and 91% of Republicans, according to a Monmouth poll.

Toth told ABC News that voters like Hicks have recourse.

“If they can’t get a driver’s license, go to DPS {Department of Public Safety], with a social security card, or some other ID, and to get an ID [election identification card] so that you can vote. It’s free,” Toth said, acknowledging that most people vote using their driver’s license.

White said obtaining an election identification is not so easy for an 82-year-old woman who lives in a rural area without the convenient ability to drive herself to the Department of Public Safety.

“My challenge is it’s taking so long to get this done,” White said. “And to send my mother through all of these hoops at this age to go get documents notarized, to go get her Social Security application, We’re having to look for high school records and baptism information…To send her through such a process, it is really is ridiculous.”