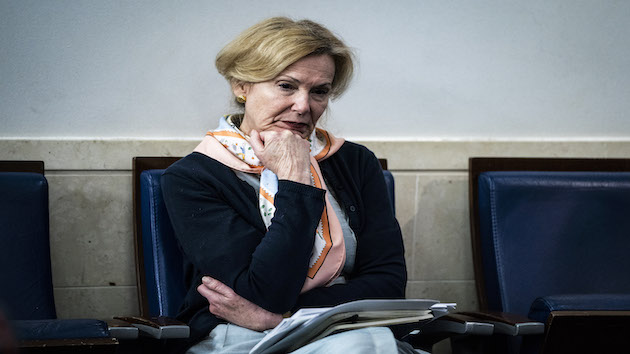 (WASHINGTON) — The former coronavirus response coordinator in the Trump White House, Dr. Deborah Birx, says she still thinks about the moment last year when she sat silently while former President Donald Trump raised the possibility of injecting disinfectant into people to treat COVID-19.

“Frankly, I didn’t know how to handle that episode,” Birx said Monday in an interview with ABC News’ Terry Moran for ABC News Live’s “The Breakdown.” “I still think about it every day.”

While Trump was mocked and condemned for suggesting such a dangerous idea, and his comments became symbolic of his response to the pandemic, Birx also was criticized for not speaking up more forcefully in the moment.

She said Monday her nearly three decades of military service had kicked in then, and that she only spoke briefly to say “not a treatment” when Trump asked her if ultraviolet rays and heat could be used to treat the coronavirus in people.

“You can see how extraordinarily uncomfortable I was,” Birx said, noting that at the time Trump had been speaking to a different official in the room. “Those of you who have served in the military know that there are discussions you have in private with your commanding officers and there’s discussions you had in public.”

Birx was a prominent figure at Trump’s briefings on the virus, at which he often downplayed the pandemic’s seriousness, with her and Dr. Anthony Fauci, the government’s top infectious disease expert. They often played the delicate role of scientific counterweights to the president’s lies and misinformation, although as a political appointee — unlike Fauci — Birx could be fired by the president at any time.

Birx said she and Fauci talked “all the time” about “how to correct the record.”

“I can’t tell you how many discussions we had on, how do we get the message out realizing what’s happening at the most senior levels of the White House,” Birx said.

Birx said in December she was stepping down from her White House role, and while her colleagues had told ABC News that she had been willing to work with President Joe Biden and Vice President Kamala Harris’s administration, she did not stay on.

Birx praised Biden officials’ consistent and scientifically sound messaging — a marked change from the Trump administration, where key public health officials like the director of the Centers for Disease Control and Prevention were often sidelined.

“Whether it’s the CDC director or Dr. Fauci or President Biden or Vice President Harris, all of them and all of their spokespeople are communicating exactly the same pieces,” she said, “and I think that is critically important.”

Differing messages, she said, allow people “to give themselves permission to perhaps do things that may put other people at risk.”

Since leaving the White House, Birx has taken on several roles in the private sector: senior fellow at the Bush Institute research center; a member of the board of directors of the pharmaceutical company Innoviva; and chief medical and scientific adviser for ActivePure Technologies, a Dallas-based air filtration company.

She said ActivePure, which develops air purification technology for indoor spaces, could help people get back indoors in a way that is safe.

“While I was out across the country listening to communities, the number one thing that everyone asked me was when will we get back to normal,” Birx said.

ActivePure sells products used against other pathogens in the air, and is in the process of applying for Food and Drug Administration approval of its technology to fight the novel coronavirus, as well.

“It’s about COVID-19 now, but I think it’s going to be about aerosolized and respiratory viruses in the future,” Birx said. “I think we’ll all look at our indoor space in a much more critical way.”