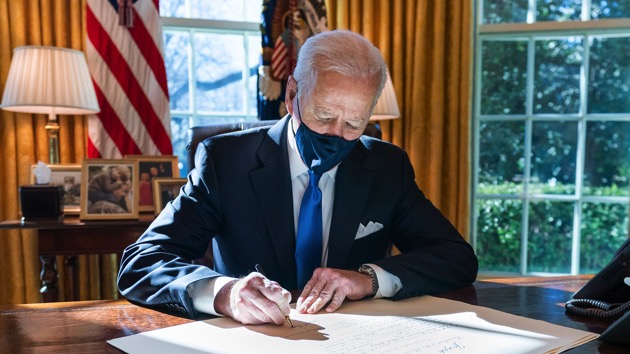 (WASHINGTON) — President Joe Biden on Wednesday planned to unveil what he called his next major priority, a roughly $2 trillion infrastructure plan to modernize thousands of miles of roads, fix thousands of bridges, expand broadband access and replace all lead pipes carrying drinking water.

To pay for it, he is proposing trillions of dollars in taxes on corporations, making a traditionally bipartisan issue one expected to trigger Republican opposition.

The president also faces headwinds from progressive Democrats who do not think the spending package is large enough, as well as more centrist Democrats who feel the opposite. Balancing their competing interests will prove essential as the Democratic congressional leadership pushes a bill through a Congress it only very narrowly controls.

Biden’s spending plan, the White House said, will create millions of jobs, and the president will detail the first part during a speech in industry- and union-centric Pittsburgh Wednesday afternoon, according to the White House. He launched his campaign there in 2019 by promising to rebuild “the backbone of America, the middle class.”

House Speaker Nancy Pelosi told colleagues on Monday she hopes to pass the package by July 4, if not later that month, according to a person familiar with her comments.

Tax hikes for corporations and ‘millions and millions of jobs’

The president proposed pairing the decade’s worth of spending with a series of tax hikes on corporations, which the White House says will pay the full infrastructure costs over 15 years.

Biden is proposing to raise the corporate tax rate from 21% to 28%, a return to the level before the 2017 GOP rewrite of the tax code. His plan would also increase taxes on multinational companies’ profits abroad and would eliminate subsidies to the fossil fuel industry, among other ideas.

On a call with reporters Tuesday night previewing the rollout, an administration official wouldn’t say if Biden plans to send one entire package or separate proposals to Congress. The official also wouldn’t say when any of the proposed infrastructure projects could potentially get started.

When asked how many jobs the proposal — which the White House is calling the “American Jobs Plan” — would create, the official would not provide a specific number, only saying it would “create millions and millions of jobs.”

The White House said the president planned to roll out a second component of his spending proposals later in April, which press secretary Jen Psaki said Monday would center on “creating economic security for the middle class through investments in child care, health care, education and other areas.”

That part could total more than $1 trillion in additional spending, according to people familiar with a Tuesday briefing for top senators on congressional committees who will be involved in crafting the package.

In recent months, Biden has signaled that he would pay for future spending proposals by raising taxes not just on corporations but on wealthy individuals, too.

Biden previously said that Americans making over $400,000 would see their taxes increase and that he supported taxing capital gains as normal income, which are not among the ideas the White House proposed this week.

An administration official told ABC News that “the focus of this plan is on corporate tax reform.”

It’s possible that those tax proposals could appear alongside next month’s spending proposal.

What’s in the infrastructure plan

Among the proposals is $621 billion in updates to modernize roads, rails, ports, airports, mass transit and highways; $100 billion to eliminate 100% of lead pipes; $100 billion to build out high-speed broadband across the country; $400 billion for community-based care for elderly Americans and a $180 billion investment in clean energy.

When he was president-elect, Biden laid out what he called “a two-step plan of rescue and recovery” — the first, his COVID relief proposal, a version of which became law this month, and the second, what he called his “Build Back Better” plan.

That plan, the then-president-elect said in January, “will make historic investments in infrastructure and manufacturing, innovation, research and development, and clean energy. Investments in the caregiving economy and in skills and training needed by our workers to compete and win the global economy of the future.”

Challenges from Republicans and Democrats alike

Biden has prioritized the major spending plan, the first half of his package, as he seizes on any early momentum he still has after pushing a $1.9 trillion COVID-19 relief package through Congress.

But with such a razor-thin Democratic majority in the House of Representatives — he can only afford to lose eight Democratic votes — and an evenly split Senate, it remained to be seen whether the infrastructure package could pass through Congress.

As it did with the relief package, also known as the American Rescue Plan, the White House has similarly leaned in to popular support for infrastructure improvements — a sign it is prepared to use, and try to shape, public opinion as a cudgel to bring members of Congress on board.

Another threat came this week from several New York-area House Democrats who want to see Biden lift the cap on the deduction for state-and-local taxes, known as SALT, imposed by a law then-President Donald Trump signed into law in 2017.

“If SALT is not included, I’m not voting for any changes to the tax code,” Rep. Tom Suozzi, a Democrat representing parts of Long Island and Queens in New York, told ABC News this week. “We all put our different interests about different issues on the back burner for the American Rescue Plan because it was so important that we all come together on it.”

On Tuesday, Suozzi issued a statement with two other Democrats, Reps. Bill Pascrell and Josh Gottheimer of New Jersey, opposing any deal that does not reverse the cap on the SALT deduction. “We say, ‘No SALT, no deal,’” they said.

Senate Majority Leader Chuck Schumer, too, on Wednesday said he would “fight hard” to get the SALT deduction caps lifted, although the New Yorker backed Biden’s infrastructure plan and touted the jobs the White House says it would create.

Biden’s plan does not reverse the cap on SALT deduction.

The White House has indicated that Biden would be willing to negotiate on potential new taxes that are sure to be unpalatable to Republicans and Democrats alike on Capitol Hill.

“The president has a plan to fix our infrastructure and a plan to pay for it,” White House press secretary Jen Psaki said Monday. “But we are also open to having that discussion, and we certainly expect to have the discussion with members of Congress, as we move forward, about areas where they agree, where they disagree, where they would like to see greater emphasis or not.”

But if Republican support does not materialize this time either, Senate Majority Leader Chuck Schumer’s office this week hinted at the possibility Democrats in that chamber could try to push through the president’s proposals through a budgetary process known as “reconciliation” — the same way they passed Biden’s COVID-19 relief bill.

That process would allow for a simple majority — including Vice President Kamala Harris’s tie-breaking vote — to pass Biden’s bills, unlike the 60 votes normally needed.

But that step would require the support of all 50 Senate Democrats — far from guaranteed after centrists have expressed a desire for prioritizing bipartisanship this time around.

Asked on Tuesday night’s call if the White House hopes to use reconciliation to push the package through Capitol Hill, an administration official would only say, “this is the beginning of a process” and would be reaching out to Republicans and Democrats.

Biden could also face competing pressures inside his party on the overall size of the package, with Jayapal and other progressives encouraging the White House to think bigger than the multi-trillion-dollar proposal Biden is expected to unveil.

“The Biden proposal on the campaign trail was significantly larger than what’s been discussed so far,” Jayapal said. “We really think there’s ample room to get the overall number up to somewhere in that range (of $6.5 trillion and $11 trillion over the next 10 years) in order to really tackle the scale of investment that we need to make.”