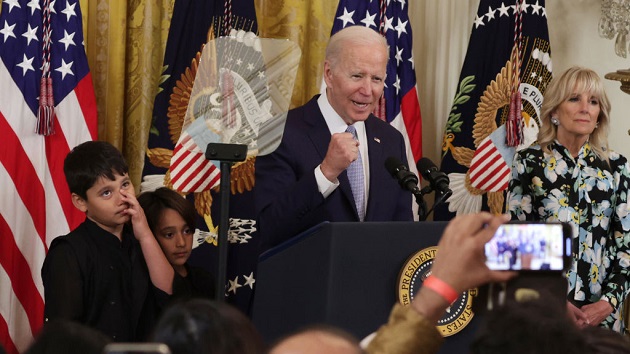 (WASHINGTON) — President Joe Biden on Monday restored a decades-long tradition of marking the end of Ramadan, Islam’s holiest month, hosting a reception at the White House.

“No one — no one should … be oppressed for their religious beliefs. Nobody. Nobody.” Biden said, remarking on the the significance of the holiday and the contributions Muslim Americans make across the nation.

This was the first gathering marking the end of Ramadan since Barack Obama was in office. Former President Donald Trump ended a years-long White House tradition of recognizing it with an iftar or Eid celebration. Last year, Biden held a virtual Ramadan event because of COVID-19 concerns.

“One of the promises I made when I ran for office is that I was to restore this annual celebration, because it’s important. It’s important,” Biden said.

“This year, thanks to the progress we made fighting the pandemic, we can fully honor my promise. And it’s in no small part thanks to the courage and commitment of many Muslim frontline workers and first responders.”

Biden also alluded to his predecessor and the Jan. 6, 2021 attack on the U.S. Capitol during his Eid al-Fitr speech, while harkening back to the values of America.

“We’re the only nation in all the history of the world that’s been organized not based on religion, race, ethnicity, geography,” Biden said.

“We’ve never met that goal, but we’ve never walked away from it. Except one brief moment. And we’re back.”

The president also noted emphasis on including Muslim Americans in his administration, including Rashad Hussain, the first Muslim Religious Freedom Ambassador and the first Muslim-American woman to be a judge on a federal court, Nusrat Jahan Choudhury.

“I’ve said it from the beginning: My administration — and I meant it, and I proved it — gonna look like America,” he said.