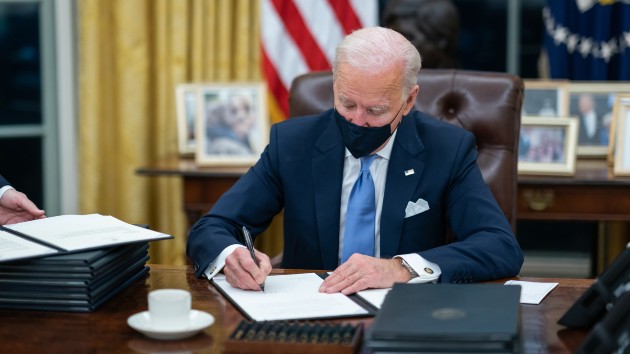 (WASHINGTON) — This is Day 25 of the administration of President Joe Biden and Vice President Kamala Harris.

Following the Senate impeachment vote Saturday — in which seven Republicans voted guilty, and Trump was acquitted — the first tweet posted to Biden’s account highlighted his bipartisan meeting Friday with mayors and governors in the Oval Office on the American Rescue plan.

“America’s governors and mayors understand the fight against COVID-19 and the urgency of another relief bill. Yesterday, I met with a bipartisan group of them to discuss the American Rescue Plan and how we can work together to meet the crises we face,” the POTUS account tweeted with a photo of the meeting.

America’s governors and mayors understand the fight against COVID-19 and the urgency of another relief bill. Yesterday, I met with a bipartisan group of them to discuss the American Rescue Plan and how we can work together to meet the crises we face. pic.twitter.com/QpJqaKQFuM

The White House continuously dodged questions on impeachment this week, saying the administration’s focus was on helping Americans struggling amid the pandemic.

Biden allies in the Senate told House impeachment managers during their deliberation Saturday afternoon that they opposed calling witnesses, making it clear that calling witnesses would take away from the president’s agenda and had the potential to derail COVID-19 relief, according to multiple sources close to the deliberations behind the scenes.

A White House official told ABC News that the White House was not involved with discussions over calling witnesses or the deal that was made.

The Senate Saturday voted 55-45 to hear from witnesses, but then the Trump legal team and House impeachment managers came to the agreement to admit the written testimony of Rep. Jaime Herrera Beutler, R-Wash., into evidence and not request further witnesses.

Herrera Beutler, one of ten House Republicans who voted to impeach, tweeted a statement Friday reiterating comments she made about a talk she had with House Minority Leader Kevin McCarthy regarding Trump’s involvement in the Capitol siege.

In Herrera Beutler’s statement, she reiterated her claims — which she made earlier to Washington newspaper The Daily News — that McCarthy spoke to Trump as rioters stormed the Capitol on Jan. 6, but Trump refused to stop them.

The U.S. Department of State raised Myanmar’s travel advisory level to “Level 4: Do Not Travel” Friday, as protests against the military’s seizure of power earlier this month continue.

The updated travel advisory states to not travel to Myanmar “due to COVID-19 as well as areas of civil unrest and armed conflict.”

“The Burmese military has detained and deposed elected government officials,” the travel advisory states. “Protests and demonstrations against military rule have occurred and are expected to continue.”

The State Department has not ordered the evacuation of U.S. Embassy staff at this time.

In a written statement this evening, President Joe Biden called on Congress to pass his $1.9 trillion COVID-19 relief proposal “right away” to help pay for the additional costs to keep schools safe as they reopen.

He also urged states to prioritize vaccinations for teachers, based on the latest recommendations from the Centers for Disease Control and Prevention.

Biden said the CDC’s guidelines to schools include “the best available scientific evidence on how to reopen schools safely” — such as ensuring social distancing, masking, hand washing and more.

“To meet these guidelines, some schools will need more teachers and support staff to ensure smaller class sizes, more buses and bus drivers to transport our kids safely, more spaces to conduct in-person instruction, and more protective equipment, school cleaning services, and physical alterations to reduce the risk of spread of the virus,” Biden wrote.

“These needs cost money,” he continued. “But the cost of keeping our children, families, and educators safe is nothing when compared with the cost of inaction.”

The House passed the Senate-amended budget resolution last week, paving the way for Biden’s COVID-19 relief plan. House Democrats are currently working to assemble the package, with the goal to get a final bill to the president’s desk before mid-March.

Feb 12, 3:52 pm
White House to figure out how to close Guantanamo Bay prison

The White House has started a process to figure out how to close the military prison at Guantanamo Bay, officials said Friday.

The process would be led by the National Security Council, spokeswoman Emily Horne said.

“We are undertaking an NSC process to assess the current state of play that the Biden administration has inherited from the previous administration, in line with our broader goal of closing Guantanamo,” Horne said in a statement.

The NSC would work with the Defense, State and Justice departments “to make progress toward closing the GTMO facility, and also in close consultation with Congress,” she said.

Horne did not provide a timeline for the process. Several key policy roles still need to be filled in the departments, she noted.

“There will be a robust interagency process to move forward on this, but we need to have the right people seated to do this important work,” Horne said.

During Thursday’s White House briefing, press secretary Jen Psaki said it was the administration’s “goal and intention” to shutter the prison, which former President Barack Obama was unable to fully close during his terms.

“We are still just three and a half weeks in,” Psaki said, referring to the short time President Joe Biden has been in office. “So we are undertaking an NSC process, which is how it should work.”

Biden and Harris met with a bipartisan group of governors and mayors in the Oval Office Friday morning, with the president saying the most important part of the American Rescue plan is giving the local leaders the resources they need to combat the virus at home.

“The most important piece in my view is making sure we give them enough capacity to deal with the virus in their states, and how we’re going to do that,” Biden said. “But equally consequential is the need to help the states economically in terms of employment, to be able to make sure that they get kids back in schools and what role the federal government should play in helping getting that done.”

Biden also praised governors and mayors for being “on the front lines” of tackling the coronavirus in their respective states or cities.

“The federal government has a major role to play here. But these are the folks that are on the ground dealing with it every single solitary day… And so whenever I want to know what’s really happening, I want to talk — and I’m not being solicitous — to governors and mayors.”

Open enrollment for health insurance through the Affordable Care Act, commonly known as Obamacare, is set to begin Monday and remain open for the next three months.

Americans will be able to shop for coverage on , the federal insurance marketplace, from Feb. 15 to May 15. The website serves 36 states. Residents in the other 14 states plus Washington, D.C. must use their state’s website to apply for and enroll in coverage.

The special sign-up period comes after Biden signed an executive order last month, calling on the U.S. Department of Health and Human Services to reopen enrollment on to ensure that those who missed it late last year amid the coronavirus pandemic will get another opportunity. The last enrollment period opened Nov. 1 and closed Dec. 15.

Feb 12, 11:20 am
Biden administration to begin admitting migrants forced to wait in Mexico

The Biden administration plans to begin processing and admitting migrants forced to wait in Mexico under the Trump administration’s “Migrant Protection Protocols” (MPP) starting next week, according to three administration officials.

The officials said “phase one” of the new admission program will start at three ports of entry and involve identifying and processing currently active MPP cases of asylum seekers who have been designated to wait for their U.S. immigration court date on the Mexico side of the border. This group is estimated to include about 25,000 people.

Asylum seekers will be brought to a U.S. port of entry, released and monitored after their information is taken and they pass a COVID-19 test in Mexico. It remains unclear how migrants will be tracked once they are admitted back into the U.S.

Officials estimated that about 300 people could be processed per day at each port of entry once the admission program is up and running.

“Overnight, the First Lady’s surprise Valentine messages to the country were installed on the north lawn for the weekend, hearkening back to the days of sharing candy hearts between friends and family,” the Office of the First Lady said in a statement Friday morning. “As you may know, the First Lady is known for her sense of humor, love of surprises, and celebrating traditions, especially with her family. Valentine’s Day has always been one of her favorite holidays. Sending messages of healing, unity, hope and compassion, this is her Valentine to the country.”

The first lady appeared outside with the president, along with their dogs Champ and Major, to view the installation and speak with reporters.

“We hope this lifted your spirits,” Jill Biden said, with a mug of coffee in hand.

When asked about his message to Americans who may be feeling down or discouraged amid the coronavirus pandemic, which has killed over 475,000 people in the United States, the president said to “stay strong” and referenced his own experience with losing loved ones.

“There is hope,” Biden said. “You just have to stay strong. A lot of people have gone through unbearable suffering. They’ve lost their families, lost their children, lost their husbands, wives, moms, dads, and it’s almost unbearable. The only thing I can say to them is that they’re still in your heart.”

“They really are,” he added. “I can tell you from experience, they’re in your heart.”