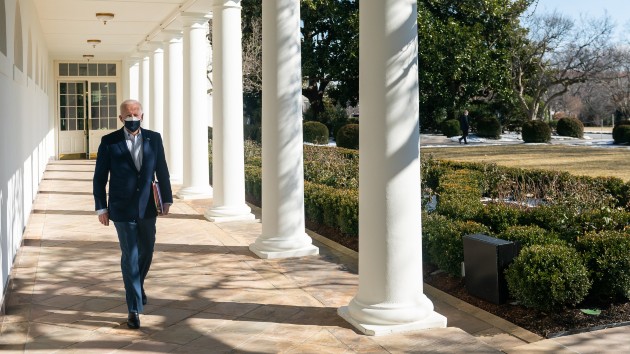 (WASHINGTON) — Tuesday is Day 42 of the administration of President Joe Biden and Vice President Kamala Harris.


Following a 15-minute call with Biden and Senate Democrats on Tuesday afternoon, Senate Majority Leader Chuck Schumer announced the Senate could vote on the $1.9 COVID-19 relief bill “as soon as tomorrow,” though Democratic sources are now saying it will likely be Thursday.

Schumer said he expected “a hearty debate” and “some late nights” during the 20-hour Senate session but made the bold prediction: “We’ll have the votes we need to pass the bill.”

Biden, Schumer said, “made his pitch” to the caucus “and he said we need to pass this bill and pass it soon.”

Senate Minority Leader Mitch McConnell said Republicans will be “fighting in every way we can” to block the COVID-19 relief bill, during his weekly press conference Tuesday afternoon.

“It is my hope that at the end Senate Republicans will unanimously oppose it,” McConnell said.

He blamed the Biden administration for its alleged disinterest in finding a bipartisan approach.

“We think this package should have been negotiated on a bipartisan basis like the last five bills were done,” McConnell said. “Instead the new administration made a conscious decision to jam us.”

The Senate confirmed Rhode Island Governor Gina Raimondo to serve as Secretary of Commerce by a vote of 84-15 on Tuesday.

The former Rhode Island governor has been praised for the way the smallest state in the country has dealt with the COVID-19 pandemic, but she has faced criticism over the vaccine rollout. Her nomination was briefly put on hold by Sen. Ted Cruz, R-Texas, who voiced concerns over how the commerce secretary would handle Chinese telecom company Huawei.

Schumer filed cloture on the nomination and the Senate proceeded to her vote today. She clarified her stance on the company, saying there is “no reason” to lift it from the Commerce Department’s entity list, which is a restricted trade list.

Biden, attending a Democratic Senate caucus virtual lunch Tuesday afternoon, urged Democrats to come together and support his $1.9 trillion COVID-19 bill and to reject amendments that might change the bill and imperil its passage, according to Democratic sources.

This is part of the president’s latest push to get his COVID-19 relief bill passed as it’s expected to be voted on in the Senate this week.

“As a demonstration of our Transatlantic unity and cooperation with partners over the ocean, many of the actions we are taking mirror the steps the EU took in October and match additional EU measures being taken today,” Psaki said. “We also reiterate our call for the Russian government to immediately and unconditionally release Mr. Navalny.”

Psaki said the sanctions are not a “silver bullet” that will repair or end the “challenging relationship” with Russia. She also did not rule out further actions after additional review of the Russian government’s “concerning behavior.”

“There is an ongoing review…we reserve the right to take any additional actions at the conclusion of that review, and just reiterating that the tone and the tenor and the type of relationship that this president intends to have with President Putin will be quite different from the last administration,” Psaki said.

White House press secretary Jen Psaki said Tuesday that the White House has engaged with 375 lawmakers and their offices in a push to have Biden’s $1.9 trillion COVID-19 relief bill passed.

“In the past two weeks alone, we’ve engaged with over 375 members and offices, over 100 of which were bipartisan engagements, and our COVID team has also started biweekly bipartisan member briefing  with the Senate and House where, of course, we talk about the American Rescue Plan and the impact it can have,” Psaki said.

White House press secretary Jen Psaki discussed the partnership between longtime competitors Merck and Johnson & Johnson to ramp up production of the single-shot J&J vaccine, which was greenlighted by the Food and Drug Administration Saturday.

“The two largest health care and pharmaceutical companies, Merck and Johnson & Johnson, usually competitors, are coming together to expand production of the vaccine, Johnson & Johnson’s vaccine drug substance, as well as increase its fill finish capacity,” Psaki said. “They will enter into a historic manufacturing partnership to expand that, I should say.”

Psaki touted the White House’s role in getting the companies to work together, saying it “speaks to the ability of this administration, broadly, to bring them to the table and work together to address the pandemic in the country.” She also discussed how the federal government is working to facilitate making the vaccine available, including providing support from the Department of Defense and using the Defense Production Act.

“The US Government will facilitate this partnership in several key ways including invoking the Defense Production Act to equip two Merck facilities to the standards necessary, safely manufacture the vaccine, and asking the Department of Defense to provide daily logistical support to strengthen Johnson & Johnson’s efforts,” Psaki said.

Sen. Joe Manchin, D-W.V., has said he wants to see some changes to Biden’s COVID-19 relief package, including it becoming more targeted, a phrase heard Monday after moderate Democrats met with Biden.

Manchin, who is a key swing vote in the split Senate, told reporters on Capitol Hill that he takes issue with the provision that adds $400 per month to unemployment insurance, saying he feels like people are coming off of unemployment now, so increasing it “doesn’t make sense.”

“It’s kind of hard to explain…I would prefer that they stay at $300 [per month],” Manchin said.

Democratic leadership says since this is not a position supported by the majority it will be a tough needle to thread. It is the last minute for Manchin to be seeking the kind of change that would really shake up the bill. The goal is to have the Senate’s reconciliation bill ready to hit the floor late Wednesday.

In floor remarks Tuesday, Senate Majority Leader Chuck Schumer affirmed that the COVID-19 budget bill could come to the Senate floor “as early as tomorrow” and continued to advocate for a robust rescue package.

“The American Rescue Plan is designed to finish the job. That’s what the American people sent us here to do that’s what our government is for,” Schumer said. “Not to sit back and wait for problems to fix themselves, not to cross our fingers and hope the economy will fix itself on its own.”

Minority Leader Mitch McConnell, meanwhile, continued railing against the bill, accusing Democrats, as he has for weeks, of loading the bill with “liberal wish list” items. He said the Democratic plan would stall the economy rather than energize it.

“It’s more like a plan to keep it shut down,” McConnell said. “Mostly it’s just what democrats promised almost a year ago, taking advantage of the crisis to check off unrelated liberal policies.”

Sen. Richard Shelby, R-Ala., the top Republican on the Appropriations Committee, threw his weight behind Young as an alternative to Tanden last week as Tanden’s nomination has become jeopardized by her past tweets critical of Republicans.

“I believe she would be good in that role. She’s smart, she knows the process inside-out, and she’s an honest broker who has demonstrated the ability to work with both sides and get things done. She would have my support, and I suspect many of my Republican colleagues would support her, as well,” Shelby said in a statement. “But that’s up to the Biden Administration.”

Tanden has had votes in the Budget Committee and the Homeland Security and Governmental Affairs Committee postponed as the White House works to secure votes necessary for her confirmation. Tanden met on Monday with Sen. Lisa Murkowski, R-Alaska, who said that even after the meeting she is still undecided about how she’ll vote on Tanden’s confirmation. The White House has maintained support for Tanden.

Because of Trump’s inaction, a second official said the U.S. was “in many ways catching up to the EU and the U.K.,” both of which sanctioned six individuals and one entity in October. Coordinating with those key U.S. allies makes these sanctions “stronger and more effective, particularly when it comes to Russia,” the first official said, because Europe has closer business ties.

But these sanctions have been cast as falling short, particularly after Navalny’s supporters circulated a list of Russian officials they called on the West to sanction. But it could be because the U.S. doesn’t want to make a domestic political issue in Russia a further drag on relations. Biden is “neither seeking to reset our relations with Russia, nor are we seeking to escalate” with Russia, the first senior official said.

“Our goal is to have a relationship with Russia that is predictable and stable. Where there are opportunities for it to be constructive and it is in our interest to do so, we intend to pursue them,” they added. That includes a possible dialogue on “strategic stability,” especially nuclear arms control.

The Food and Drug Administration approved an Emergency Use Authorization for the vaccine Saturday, which triggered the shipment of nearly 3.9 million doses of the vaccine. Of those, 800,000 are expected to go directly to pharmacies.

Mar 02, 9:04 am
Biden to have call with Democratic senators on COVID-19 relief push

President Biden will have a conference call with Senate Democrats for a second day in a row Tuesday. He will call into their weekly virtual conference lunch. In his final push for his $1.9 trillion COVID-19 relief package, the president is upping pressure on lawmakers to get the bill passed. Biden had a meeting with Senate Democrats Monday including moderate Sen. Joe Manchin, D-W.V., who has become a key vote in the 50-50 split Senate. Another key moderate Democrat, Sen. Kyrsten Sinema, D-Ariz., was also invited to attend, but was unable to because she was traveling.

In the afternoon, Biden will deliver remarks at 4:15 p.m. on the pandemic. Harris will also attend that event.