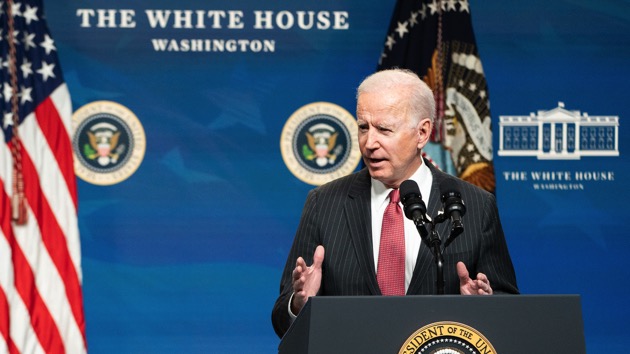 The Senate has confirmed Tom Vilsack to serve as secretary of agriculture, in a 92-7 vote.

Sen. Bernie Sanders voted with six Republicans against Vilsack, who had the same role under former President Barack Obama.

A spokesperson for Republican Leader Mitch McConnell confirmed reports to ABC News that McConnell intends to support the nomination of Merrick Garland to serve as attorney general.

McConnell’s support for Garland was first reported by Politico.

The Senate Judiciary Committee on Tuesday wrapped up two days of hearings on Garland’s nomination. The committee is scheduled to hold a vote on the nomination on March 1.

McConnell’s support for Garland is in stark contrast to his 2016 efforts that successfully kept Garland from the Supreme Court bench.

Senate Minority Leader Mitch McConnell doubled down on his position that the COVID-19 proposal from Democrats is far too large, not targeted enough and flies in the face of bipartisanship during a press conference Tuesday.

“We think this is dramatically more money than is required at this particular juncture. It also includes a number of things that have absolutely nothing to do with COVID relief,” McConnel said. “And so it will be controversial.”

McConnell said his conference is united Tuesday in “opposition to what the Biden administration is trying to do,” arguing that Biden, who campaigned as a moderate, has been pushing far-left policies since his administration began, calling Biden’s “a totally partisan approach to COVID relief.”

Biden on Tuesday announced Kiran Ahuja as his nominee for director of the U.S. Office of Personnel Management, where she previously served as chief of staff during the Obama administration.

Biden and domestic policy adviser Susan Rice met virtually with Black essential workers on Tuesday, including health care workers, child care workers and others from across the country to thank them for their work throughout the COVID-19 pandemic.

“You are heroes and your service, we honor. A disproportionate number of Black Americans serve as front-line workers and as first responders, putting yourselves at greater risk of contracting COVID-19,” Rice said. “And one in four deaths from COVID-19 have been those of Black Americans, and so during this Black history month, we wanted to say thank you, to lift up your voices, and your service and your needs.”

Biden listened to the participants and asked questions. He also touted his administration’s COVID-19 relief bill, talking about how it would help industries and individuals. Biden said his administration is focusing on the needs “particularly of the most left behind community, the African American community.”

Biden’s nominee for secretary of the interior, Rep. Deb Haaland, D-Ariz., appeared before the Senate Energy and Natural Resources Committee for the first round of questioning in her confirmation hearing Tuesday.

Haaland introduced herself in the native language of the Laguna Pueblo and thanked her family, her partner and her ancestors. She also acknowledged that the hearing was taking place on the native lands of the Anacostia, Piscataway and Nakochtank tribes.

She said her priorities would be valuing career employees at the Department of the Interior and promoting clean energy. For Native American communities, she said she would focus on bringing broadband access to them and addressing the high number of missing and murdered Native American women. She also talked about her support for a modern Civilian Conservation Corps as a way of offsetting potential job loss from a transition to cleaner energy.

“But we must also recognize that the energy industry is innovating, and our climate challenge must be addressed,” she said in her opening statement. “Together we can work to position our nation and all of its people for success in the future, and I am committed to working cooperatively with all stakeholders, and all of Congress, to strike the right balance going forward.”

Throughout the hearing, when questioned about her past statements and positions, Haaland said that if confirmed she would be advancing Biden’s interests. She dodged a question about her stance on fracking, saying the president does not support a fracking ban.

In his opening statement, Sen. John Barrasso, R-Wyo., said he was troubled by Haaland’s “radical” views, a sentiment also expressed by other Republicans on the committee. He said he would oppose Haaland’s nomination. During his questioning, Barrasso pressed Haaland on an October tweet that said Republicans don’t believe in science.

The committee will be back Wednesday at 10 a.m. for the second round of questioning.