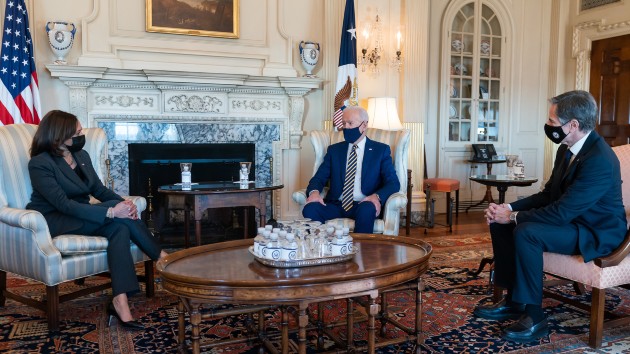 (WASHINGTON) — This is Day 32 of the administration of President Joe Biden and Vice President Kamala Harris.

The legislation includes an increase to the federal minimum wage to $15 per hour, $1,400 direct payments to Americans making $75,000 or less a year, as well as an extension of $400 federal unemployment benefits.

The House Budget Committee is expected to “markup” the bill on Monday. The full House is expected to pass this bill by the end of next week — possibly even over the weekend — before it heads off to the Senate.

The legislation, which had already been passed in pieces out of individual committees, was packaged together by the House Budget Committee.

The United States formally rejoined the Paris climate accord on Friday, 30 days after President Joe Biden signed the mechanism to reenter the historic agreement.

While climate advocates cheered the decision, Biden’s special presidential envoy for climate change, John Kerry, sounded the alarm about the need for urgent and ambitious action.

President Joe Biden has approved a major disaster declaration for Texas stemming from the severe weather that destroyed the state’s power grid.

The federal funds are available to 77 of the state’s counties and can be used for “grants for temporary housing and home repairs, low-cost loans to cover uninsured property losses, and other programs to help individuals and business owners recover from the effects of the disaster,” according to the White House.

President Biden told acting Federal Emergency Management Agency Administrator Bob Fenton Friday afternoon he was “ready to mobilize” federal agencies to support Texas during the state’s weather crisis, according to a readout from the White House of their call.

Biden told Fenton he wants to “ensure that any critical needs are met.” As he previewed earlier Friday, the president also said he plans to sign Texas’ Major Disaster Declaration request “as soon as FEMA sends over the formal request from Gov. [Greg] Abbott.”

Biden added his White House would continue to stay in close contact with FEMA and local officials through senior administration officials.

More than 14 million people are scrambling for safe drinking water and many lack the power to boil it after a historic winter storm earlier this week knocked out power and froze pipes across Texas.


Pfizer workers gave President Joe Biden a lot to be happy about during his tour of the Kalamazoo, Michigan, manufacturing site. He was shown two new assembly lines that will be able to produce 700,000 doses per hour starting next week, and Pfizer CEO Albert Bourla confirmed Pfizer’s supply of lipids needed to produce the vaccines has greatly increased.

Biden was accompanied by Michigan Gov. Gretchen Whitmer, Bourla and Shawn Hamilton, the production lead at the site.

A process engineer explained to Biden that six months ago the site was “basically warehouse space,” and the whole facility was designed and completed in that amount of time.

“We feel we are now going to run capacity, good news for manufacturing capacity, we will improve our weekly segments more than double,” Bourla said.

Psaki said the president wanted to see the factory in action because it employs many Michiganders and because it is “producing a large swath of the Pfizer vaccines that are going out to the American public.” She also said that the factory benefitted from Biden invoking the Defense Production Act.

“The administration engaged with Pfizer suppliers to obtain the equipment needed to expand manufacturing capacity, including at the facility in Kalamazoo,” Psaki said.

After his virtual address at the Munich Security Conference, Biden responded to questions about the weather in Texas and confirmed he is considering visiting the state next week but wants to make sure his visit won’t burden people responding to the crisis.

“If in fact it’s concluded that I can do without creating a burden for the folks on the ground when they’re dealing with this crisis, I plan on going,” Biden said.

Biden also confirmed he would soon sign a major disaster declaration for Texas, in addition to the emergency declaration he signed Sunday. Biden took the opportunity to tout his efforts on Texas’ behalf as keeping a campaign promise to be a president for all Americans.

“It’s all about commitment to the American people — that people make to one another — so we’re gonna sign that declaration once it’s in front of me,” Biden said.

With the major disaster declaration, Biden will direct more federal agencies, including the Department of Health and Human Services and the Department of Defense, to identify additional resources to help Texans, in addition to the help FEMA is already providing.

During remarks at the Munich Security Conference on Friday, one of Biden’s first appearances on the global stage, he emphasized a commitment to global alliances and democratic values. Biden’s speech also contained a few thinly veiled jabs at former President Donald Trump and indications that Biden intends to reverse Trump’s policies.

“I speak to you today as president of the United States, at the very start of my administration, and I’m sending a clear message to the world: America is back,” Biden said. “The Transatlantic Alliance is back. And we are not looking backward, we are looking forward together.”

Biden called on allies to come together to counter the threats from China and Russia and protect global security, and said the U.S. would rejoin negotiations on Iran’s nuclear program. The president also stressed the need for a global response to climate change, touting America’s return to the Paris Agreement.

The president also announced the U.S. will contribute $4 billion to the COVID response and vaccination and to global health systems.

“Today, I’m announcing that the United States is making a $2 billion pledge to COVAX, with the promise of an additional $2 billion to urge others to step up as well,” Biden said. “Even as we fight to get out of the teeth of the pandemic, the resurgence of Ebola in Africa is a stark reminder that we must simultaneously work to finally finance health security, strengthen global health systems, and create early warning systems to prevent, detect and respond to future biological threats because they will keep coming.”

Early excerpts of Biden’s remarks released by the White House tease that the president will lament that “in too many places, including in Europe and the United States, democratic progress is under assault,” at the Munich Security Conference Friday morning.

In a thinly veiled criticism of his predecessor, Biden will stress democratic values and upholding the rule of law. The administration previewed the speech at length Thursday night, with one senior administration official stressing that, “the focus of his speech tomorrow is not Donald Trump or what’s happened over the last four years.” However, much of the excerpts read as a reset for America on the world stage.

“We are in the midst of a fundamental debate about the future direction of our world. Between those who argue that – given all of the challenges we face, from the fourth industrial revolution to a global pandemic – autocracy is the best way forward and those who understand that democracy is essential to meeting those challenges. Historians will examine and write about this moment. It’s an inflection point. And I believe with every ounce of my being that democracy must prevail,” the excerpt said.

Feb 19, 9:15 am
Biden offers support to Texas in call with governor

Biden spoke to Texas Gov. Greg Abbott about the severe weather situation in Texas, according to a readout released by the White House Thursday night. Biden offered his support to the people of Texas during the call.

“He reiterated that the federal government will continue to work hand-in-hand with state and local authorities in Texas to bring relief and address the critical needs of the families affected,” the White House readout said. “He also shared his intentions to instruct additional federal agencies to look into any immediate steps that could be taken to support Texans at this time.”

The United States officially rejoined the Paris Agreement on Friday.

Biden signed a memo on his first day in office as president initiating the country’s re-entry into the climate accord — a process that takes 30 days.

“The Paris Agreement is an unprecedented framework for global action. We know because we helped design it and make it a reality,” U.S. Secretary of State Antony Blinken said in a statement Friday. “Now, as momentous as our joining the Agreement was in 2016 — and as momentous as our rejoining is today — what we do in the coming weeks, months, and years is even more important.”

The U.S. has not yet offered specifics around its re-entry. There has been no announcement about new financial support, U.S. climate financing or what will be the country’s target emission reductions under the deal, known as its Nationally Determined Contribution.

The U.S. became the first country in the world to formally withdraw from the Paris Agreement in November, more than three years after former President Donald Trump announced the move.