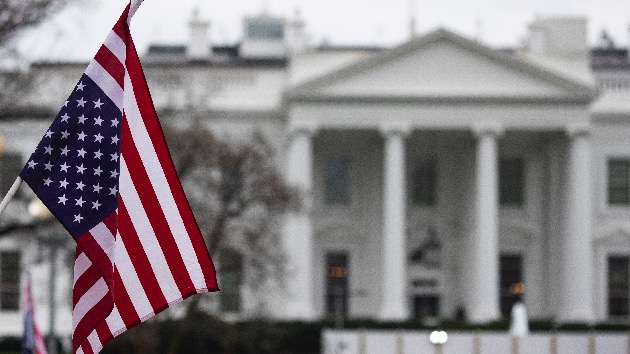 Senate Majority Leader Chuck Schumer led 10 of his Democratic colleagues out of the Oval Office about 90 minutes after the start of their meeting with Biden and made no mention of any potential red lines discussed or whether the group talked about moving forward with the reconciliation process.

Schumer did attempt to underscore unity among Democrats, saying, “We’re going to all work together with this president, we are united as one, for a big bold package, working with our Republican friends, when we can.”

Unlike Biden, who expressed confidence at the beginning of the meeting that he could win bipartisan support, Schumer has still left the door open to going it alone.

“There’s universal agreement we must go big and bold,” he said.

“We hope our Republican colleagues will join us in that, in that big, bold program that America needs. The vast majority of Republican voters support large parts of the program. We want to do it bipartisan, but we must be strong,” Schumer continued. “We cannot dawdle, we cannot delay, we cannot dilute, because the troubles that this nation has, and the opportunities that we can bring them, are so large.”

Federal jobless benefits, put in place amid the ongoing pandemic, are set to expire March 14.

Centers for Disease Control and Prevention Director Dr. Rochelle Walensky said at Wednesday’s White House coronavirus briefing that “vaccination of teachers is not a prerequisite for a safe reopening of schools,” citing increasing data suggesting that’s the case.

Walensky’s comment comes after Senate Minority Leader Mitch McConnell slammed Democrats for refusing to open schools because, he said, they’re beholden to “big labor,” a reference to teacher’s unions, which have adamantly fought not to send teachers back to school without vaccines.

"Not wearing masks and participating in in-person social gatherings have contributed to the variants spread. We must take prevention intervention seriously," CDC Director Dr. @RWalensky says. "Now is not the time to let our guard down." https://t.co/XpzCetkNpb pic.twitter.com/BB5SgS61Qx

Biden’s COVID-19 response director Jeff Zients was quick to add that Biden wants to get teachers all the necessary resources to stay safe, like personal protective equipment, ventilation and access to testing. Zients called on Congress for funding — which McConnell shot down earlier, arguing that funding for schools from the last relief package hadn’t been used up.

Zients also said the federal government was partnering with California to open its first two federal vaccination community centers Wednesday. They were built by the Defense Department and are being run by federal employees from a handful of different agencies, including FEMA. The centers will be in East Los Angeles and Oakland, two places hard hit by the pandemic.

Biden has pledged to open 100 vaccination centers nationwide over his first month in office.

Walensky also noted that case numbers are now back to the level they were before Thanksgiving but “still twice as high as the peak number of cases over the summer.” She asked Americans not to gather on Superbowl Sunday.

After a moving ceremony inside the U.S. Capitol Rotunda, United States Capitol Police Officer Brian Sicknick for the last time departed Capitol Hill — the place he swore to protect and died while doing so one month ago.

He was given the rare distinction of lying in honor inside the Capitol.

Sicknick, 42, died from injuries he sustained fending off members of the mob that breached the Capitol complex on Jan. 6.

“May it be a comfort to Officer Sicknick’s family that so many mourn with them and pray for them during this sad time,” said House Speaker Nancy Pelosi in remarks.

Sicknick’s urn was carried down the East front Capitol steps as bagpipes played “Amazing Grace.” His final resting place will be Arlington National Cemetery, where his remains will be interred.

In a brief pool spray in the Oval Office during Biden and Harris’ meeting with Senate Minority Leader Chuck Schumer and Senate Democratic chairs of the committees most involved in the drafting of the American Rescue Plan, the president expressed confidence that he would get bipartisan support for COVID-19 relief.

Asked if he would “go it alone, without Republicans,” Biden said confidently, “Oh we’ll get Republican support.”

“I think we’ll get some Republicans,” Biden added.

Biden also said he welcomed “home” the Democratic Senators in the meeting.

“This is their new home, for a while anyway. And with — with a little bit of luck, the grace of God, the goodwill of the neighbor, and the creek not rising, it’s gonna be longer than just four years, so,” Biden said, prompting Schumer to knock twice on a wooden table.

The Justice Department on Wednesday filed notice with the District Court in Connecticut that it is voluntarily dropping its discrimination lawsuit against Yale University that was brought under the Trump administration.

Back in October, the Justice Department sued, alleging that Yale used illegal discrimination practices to decide who gets admitted to the university.

Specifically, the department alleged Yale discriminated against Asian American and white students. Its complaint accused Yale of injuring applicants and students based on their race and alleged that the university engaged in “racial balancing.”

Biden is meeting with Senate Majority Leader Chuck  Schumer and Senate Democratic chairs of the committees most involved in the drafting budget reconciliation to make way for his COVID-19 “American Rescue Plan” in the Oval Office on Wednesday.

Sens. Patty Murray, D-Wash., and Ben Cardin, D-Md., are overseeing confirmations hearings and were not able to attend, the White House said.

The meeting with Democrats comes after Biden met with 10 Republican senators on their COVID-19 relief plan — which costs about a third of Biden’s — in the Oval Office Monday night.