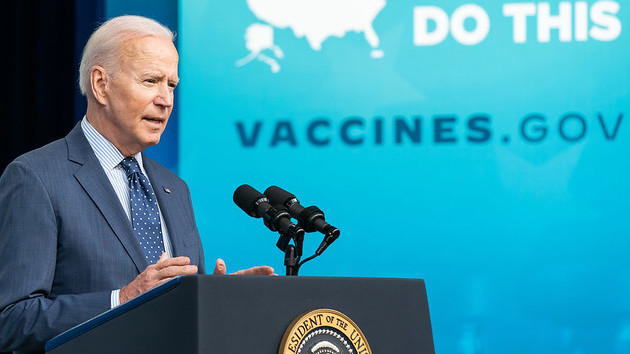 (WASHINGTON) — The Biden administration’s vaccine mandate for federal workers could set the groundwork for more private sector organizations to follow along. But it also is likely to trigger an avalanche of lawsuits from those who say required vaccinations infringe on the civil liberties of Americans.

President Joe Biden is expected to announce on Thursday a plan requiring all federal workers to be vaccinated or comply with “stringent COVID-19 protocols like mandatory mask wearing — even in communities not with high or substantial spread — and regular testing.”

The U.S. Equal Employment Opportunity Commission says that employers can require their employees to be vaccinated with exceptions being granted for religious and medical reasons.

Federal law does not bar organizations from mandating coronavirus vaccines even as the publicly available vaccines have yet to receive full authorization from the Food and Drug Administration, according to a Justice Department memo.

But some legal scholars say that full approval from the FDA would give companies increased legal cover from employees who refuse to comply with a vaccine mandate.

“There are many companies that are worried about pushback litigation and are waiting for full FDA approval,” said Larry Gostin, a professor of global health law at the Georgetown University Law Center and director of the World Health Organization Center on Public Health Law and Human Rights.

Full FDA vaccine approval is expected in September, according to a federal official. Normally, full approval takes up to a year following the submission of all required data.

Gostin added that employers also have the right to terminate employees who do not comply with their company’s vaccine mandate.

“A worker doesn’t have a legal or ethical entitlement to go unvaccinated or unmasked in a crowded workplace,” he said. “They can make decisions for their own health and well-being, but they can’t pose risk to others. Somebody who is unvaccinated and isn’t tested and unmasked poses a very substantial risk of transferring a very dangerous, if not deadly, disease.”

Similar to the legal arguments over state mask mandates, the debate surrounding vaccine mandates is an issue widely expected to end up in court.

“America is a very litigious society and there will be lawsuits,” said Gostin. “But employers and particularly hospitals are on very firm legal grounding and will win those lawsuits.”

While the Biden administration’s vaccine mandate for federal workers could inspire similar moves from large employers to local governments, some states are taking offensive measures.

And with return to school quickly approaching for millions of U.S. students, some legislatures have even sought to prohibit required COVID-19 vaccines for school attendance.

The Federal Law Enforcement Officer’s Association, which consists of FBI agents and U.S. Marshalls, however, sees the Biden administration’s vaccine mandate for federal employees as an attack on civil liberties.

“Forcing people to undertake a medical procedure is not the American way and is a clear civil rights violation no matter how proponents may seek to justify it,” said Larry Cosme, the association’s president, in a statement.

The idea of employer vaccine mandates is something that many public health experts increasingly agree on. A large number of companies are still allowing employees back to the office based entirely on voluntary employee disclosure of vaccination status as opposed to requiring actual proof of vaccination.

“An honor system can work in a situation where you don’t have an epidemic,” said Dr. Wafaa El-Sadr, a professor of epidemiology and medicine at Columbia Mailman School of Public Health. “We need to realize that we are in an emergency, and we have to do everything possible to ensure that the vast majority of people get vaccinated.”

Google, Apple and Facebook all postponed their return to office plans for mid-October as the delta variant continues to drive a dramatic rise in COVID-19 cases and hospitalizations nationwide.

Google’s decision to require staff in their offices to be vaccinated comes after similar announcements impacting government workers in New York and California to curb the spread of the delta variant.

“The timing for these vaccine mandates is right and it’s actually a bit long overdue,” said El-Sadr.