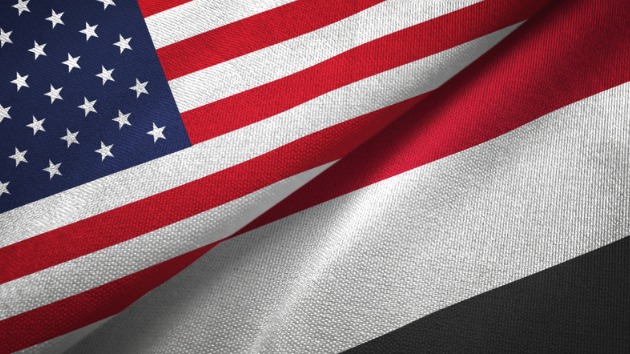 (WASHINGTON) — Not long after President Joe Biden took office he moved immediately to push for an end to the war in Yemen — pausing two arms sales to Saudi Arabia, naming a special envoy to reinvigorate diplomacy, and lifting the U.S. designation of the Houthi rebels as terrorists after aid groups warned it would spell disaster.

But just over two weeks later, his administration is now sanctioning more Houthi leaders, as the movement’s forces continue their offensive against a key northern city and their rocket and drone attacks against Saudi Arabia. And despite Yemen experiencing the world’s worst humanitarian crisis, the United Nations donors conference Monday fell short of half of its requested funding to address the Yemeni people’s plight.

It’s a sign that despite U.S. intentions, there are limits to what U.S. diplomacy can do, but to critics, it’s also proof that Biden shouldn’t have revoked his predecessor Donald Trump’s 11th hour designation of the Iran-backed rebels.

In six years of war, Saudi Arabia and the United Arab Emirates have led a U.S.-backed coalition in support of the Yemeni government against the Houthis, a Shiite movement known formally as Ansar Allah and armed by Iran. Both sides have faced allegations of war crimes, with Yemen’s population of around 29 million people suffering in the crosshairs and from starvation, sky-high inflation and a collapsed economy, and outbreaks of cholera and now coronavirus.

Both men are said to have received training in Iran and helped smuggle Iranian weapons into Yemen. Secretary of State Antony Blinken condemned Tehran’s government for fanning “the flames of the conflict, threatening greater escalation, miscalculation, and regional instability,” and providing the Houthis “weapons, intelligence, training, and support to conduct attacks” against civilian targets in Yemen and neighboring Saudi Arabia.

But it was just two weeks ago that Blinken lifted certain sanctions on the Houthis’ top leadership as specially globally designated terrorists. Former Trump administration officials accused their predecessors of easing up the pressure on the Houthis, even as they marched forward on the battlefield.

State Department spokesperson Ned Price defended that decision Monday, saying that those Houthi leaders remain under different U.S. sanctions and that lifting the designation was critical to staving off a humanitarian crisis.

Aid groups have warned that designating the Houthis as a terrorist organization would create enormous legal hurdles to bringing food, medicine, and other aid into a country where most civilians are reliant on foreign assistance.

“It was not a mistake to do everything we could within our power to alleviate the humanitarian suffering of the Yemeni people,” Price told reporters.

Price also defended the Biden administration’s response to the humanitarian crisis amid a deep shortfall in funding.

The U.S. is contributing an additional $191 million for aid groups, Blinken announced Monday, on top of the $160 million the Trump administration had pledged for this fiscal year. That brings total U.S. assistance to $3.4 billion since the conflict began, according to the State Department.

The U.N. had urged governments to provide more funding after its pledge drive last year was met with a little over half of its request — at a time when the need is even greater, especially because of continued fighting and COVID-19.

But Monday’s drive fell even further short — less than half of the $3.85 billion the UN requested for the 16 million Yemenis on the brink of famine and the 20 million that rely on humanitarian assistance everyday.

The U.S. had called on Saudi Arabia and the United Arab Emirates in particular to boost their pledges after pulling back last year. Both Arab countries have announced more aid, with the Saudis telling the conference they’ll supply $430 million and the UAE announcing Friday it will commit an additional $230 million.

Price wouldn’t say whether the U.S. was disappointed with Monday’s total, but called on the international community to “raise our ambition. … The United States put up today, other countries made generous donations. We need to keep that momentum going,” he said.

More than that, however, those pledges need to now be delivered quickly, according to David Gressly, an American who serves as the U.N.’s humanitarian coordinator for Yemen.

This cycle of donor pledges has made work even harder for aid groups, according to Muriel Boursier, the Doctors Without Borders chief in Yemen.

“There is a need for sustained response with proper funding,” Boursier told ABC News from the capital Sana. “The humanitarian response cycle, with every year new pledging, disrupts the system every year.”

While aid alone won’t stop the conflict, Gressly added, it is critical to halting the fighting, with scarce resources an important driver: “If you’re not feeding the people, you’re feeding the war,” he told world leaders.

Blinken also offered praise Monday for the Saudi and Yemeni governments, saying U.S. special envoy Tim Lenderking reported both are “committed and eager to find a solution to the conflict.”

But the Houthi rebels have continued their offensive toward Marib, a major city and key stronghold of government support — imperiling over a million people, many of them already displaced from elsewhere in Yemen, and threatening further humanitarian disaster.

While the U.S. and U.N. have called for that campaign to halt, Houthi forces continue to advance, emboldened on the battlefield to take control of Yemen’s remaining population centers ahead of any negotiations.