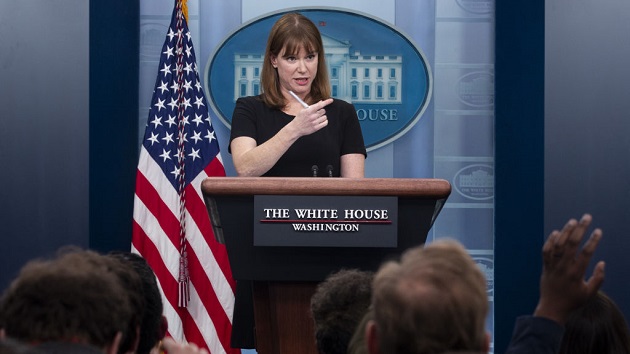 Bedingfield is a longtime top aide to President Joe Biden: She was his communications director when he served as vice president under Barack Obama and became his deputy campaign manager for communications during his winning bid for president in 2020.

She has been one of Biden’s most trusted advisers and played a major role during his third campaign, both behind and in front of the camera.

She started as White House communications director when Biden took office in January 2021 and has been a regular presence on TV and in the press advocating for or defending the administration.

White House aides say Bedingfield, who has also worked in corporate public relations, is leaving to spend more time with her husband and two young children, but she is expected to continue to support the administration from the outside.

“Without Kate Bedingfield’s talent and tenacity, Donald Trump might still be in the White House, the Rescue Plan and the Infrastructure Law might still be unrealized goals, and Ketanji Brown Jackson might not be sitting on the Supreme Court,” Biden’s chief of staff, Ron Klain, said in a statement.

“She has played a huge role in everything the President has achieved – from his second term as Vice President, through the campaign, and since coming to the White House,” Klain said. “Her strategic acumen, intense devotion to the President’s agenda, and fierce work on his behalf are unmatched. She will continue to remain a critical player in moving the Biden agenda forward from the outside.”

Bedingfield’s departure comes as the administration is struggling with a slew of challenges — from the economy and inflation to gun violence, abortion access in the wake of Roe v. Wade’s overturning and poor polling for the president, whose approval ratings have continued to decline.

Her exit also comes in the lead up to the November midterm elections and she follows other senior members of the administration out the door, including former White House press secretary Jen Psaki.

Who is Harriet Hageman, the Trump-backed candidate running against Liz Cheney?