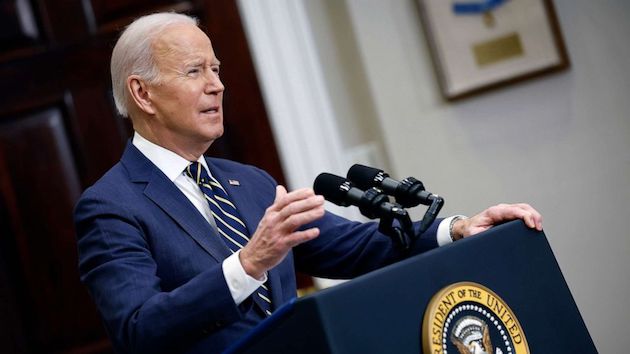 (WASHINGTON) — While President Joe Biden has repeated that the U.S. will not send troops to Ukraine to fight Russia, he warned Friday that “Russia would pay a severe price” if it used chemical weapons in Ukraine, raising questions over what those consequences would look like.

Biden announced new trade sanctions on Russia Friday and reiterated his position from the White House that “we will not fight a war against Russia in Ukraine,” but so far, economic sanctions from the international community have not stopped Russian President Vladimir Putin’s invasion.

The Biden administration has warned this week that Putin could use chemical or biological weapons, but officials have repeatedly refused to say if a chemical attack would cross a red line or whether they have intelligence that an attack is imminent.

“Your White House has said that — that Russia may use chemical weapons, or create a false flag operation to use them,” a reporter asked the president Friday. “What evidence have you seen showing that, and would the U.S. have a military response if Putin does launch a chemical weapons attack?”

“I’m not going to speak about intelligence,” Biden said, “but Russia would pay a severe price if they used chemical weapons.”

It was the only question he took before leaving the room.

White House deputy press secretary Andrew Bates, briefing reporters on Air Force One after the remarks, echoed Biden that there would be “severe consequences,” but also declined to go into specifics about what those would look like for Russia.

“They have used chemical weapons, which again, they are the only country in the mix here who possesses those, in Syria, and time again, we have warned about this particular pretext, and so it is something that we are being attentive to,” he said. “Russia is the only country in this equation with a chemical and biological weapons program in violation of international law.”

Russia, meanwhile, has doubled down on false claims that the U.S. is helping Ukraine develop chemical or biological weapons, bringing the accusations to the world’s stage at the U.N. Security Council Friday in an emergency session.

“I can foresee what the reaction will be from our Western colleagues, who I am sure are going to be saying now that all of this information is fake and Russian propaganda, but this is self-delusion and I do not think this will be helpful to the European people in case there are outbreaks in Ukraine and neighboring states,” said U.N. Ambassador for Russia Vassily Nebenzya.

Russia has not supplied any credible information to support their claims, but a web of disinformation spread the conspiracy theory this week — heightening concern among U.S. and Ukrainian officials that Russia itself may be planning to deploy chemical or biological weapons against Ukrainian targets or as part of a so-called “false flag” operation.

“I will say this once: Ukraine does not have a biological weapons program, and there are no Ukrainian biological weapons laboratories supported by the United States. Not near Russia’s border or anywhere,” rebutted U.N. Ambassador for Linda Thomas-Greenfield. “Ukraine owns and operates its own public health laboratory infrastructure,” she continued. “It has absolutely nothing to do with biological weapons.”

A senior administration official told ABC News Chief Global Affairs Correspondent Martha Raddatz that aside from the so-called “false flag operations” — in which Russians are accusing Ukraine and the U.S. of a possible chemical or biological attack — the U.S. is receiving reports that the Russians are starting to bring in chem-bio suits to Ukraine.

“We believe it is an ominous sign they are possibly doing it for cover,” the official said of the Russian pretext.

The official also said that as much as one-fifth of the Russian force is now “inoperable” — meaning they are either dead, wounded or don’t have the support or equipment needed to continue right now — but there are still fears forces could take Kyiv as it wears down Ukraine.

JUST IN: “Russia would pay a severe price if they used chemical weapons,” Pres. Biden says.

The U.S. has warned of “indications” Russia could use false claims about biochemical weapons as excuse to use them. Read more: https://t.co/Sf8pQJpYWb pic.twitter.com/ztDWqEIv5P

Ukrainian President Volodymyr Zelenskyy said in a televised address late Thursday, that Russia falsely accusing Ukraine of preparing for a chemical attack “makes me really worried, because we’ve been repeatedly convinced if you want to know Russia’s plans, look at what Russia accuses others of.”

A senior defense official said Friday that despite the barrage of claims from China and Russia, the U.S. is not helping Ukraine create any chemical or biological weapons.

“We have nothing to hide, and the only reason why we elevated the discussion is because the Russians and the Chinese decided to lie about it — just flat out lie,” the official added. But they would not offer any U.S. intelligence assessment of the likelihood of Putin deploying chemical or biological weapons in Ukraine.

“We know that the Russians have had — and we assess that they still have — a sophisticated chemical and biological weapons program. I’m not going to talk about intelligence assessments about what they may do with that program or what, if any, designs they might have on Ukraine in that regard,” the official said.

A Pentagon official told reporters Thursday it has “picked up indications that the Russians could be making these claims — these false claims — about us and Ukrainian work in biodefense as a way of creating a pretext of their own, to perhaps use these kinds of agents in an attack.”

Pressed on what “indications” they were referring to, they added, “I have to leave it with you with indications, and [I’m] not going to be at liberty to go in more detail than that today.”

Amid the looming threat, the World Health Organization has urged Ukraine to now destroy pathogen samples because Russia’s war in the country risks an “accidental spill.”

“This is part of us providing public health advice to every country to try to ensure there is a minimized risk of any harm to population because of any possible accidental leak of pathogens,” said WHO spokesperson Tarik Jašarević said from Lviv, Ukraine.