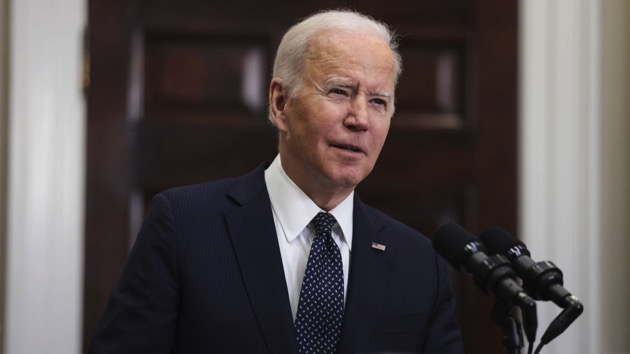 (WASHINGTON) — After weeks of warning of “severe” sanctions if Russia invaded Ukraine, President Joe Biden was set to deliver remarks from the White House Thursday in what’s unfolding as a defining moment in his presidency as President Vladimir Putin continued a large-scale attack.

Expected to announce additional sanctions on Russia, Biden will lay out “further consequences the United States and our Allies and partners will impose on Russia for its unprovoked and unjustified attack on Ukraine,” according to a White House official.

But it’s still unclear how much further those sanctions will go — and whether they would make any difference in what Putin claimed overnight would be a “special military operation” in eastern Ukraine, but is proving to be much more widespread.

“To anyone who would consider interfering from the outside, if you do, you will face consequences greater than any you have faced in history,” Putin warned the world.

While it was also still unclear just how far Putin would go beyond eastern Ukraine, Russian forces attacked near the capital city Kyiv — raising new fears he would try to topple Ukraine’s government.

The Biden administration has threatened further sanctions on major Russian financial institutions and banks, to take steps to restrict Russian access to technology, to cut Russia off from SWIFT (Society for Worldwide Interbank Financial Telecommunication) — which would hinder Russia’s participation in global markets, and to directly sanction Putin’s inner circle — or the Russian president himself.

Biden told reporters late last month that he would consider personally sanctioning Putin if Russia invaded Ukraine — a day after 8,500 American forces were put on “heightened alert” in the region — but those efforts did not appear to deter the Russian leader, nor did economic sanctions imposed this week by the U.S. and European allies, including halting the certification of Nord Stream 2, a major natural gas pipeline running from Russia to Germany.

The Biden administration has already begun to roll out a “first tranche” of sanctions, related to Russian banks, oligarchs and the natural gas pipeline Nord Stream 2, as some lawmakers have criticized Biden of not going far enough on sanctions, which haven’t resulted in Russia reversing course.

Senate Republican Leader Mitch McConnell at a press event in Kentucky ahead of Biden’s remarks called on the administration to “ratchet the sanctions all the way up” on Russia.

He said “we honestly don’t know” if sanctions would be enough to deter Putin but argued harsher ones were still necessary.

As of Thursday morning, Russian forces had advanced from three directions — from the south heading north, from Belarus heading south to Kyiv and from northeast of Ukraine heading to the south — as Ukrainian woke up to a nation at war.

The White House has said the sanctions will be “united and decisive,” but it remains to be seen how the West can punish Putin, who seems intent on moving ahead with his plans, despite weeks of attempted diplomacy from the international community and a set of sanctions already imposed.

With the U.S. condemning what’s it calling an “unprovoked and unjustified” attack on Ukraine, Biden met with his National Security Council in the Situation Room early Thursday ahead of a virtual video call with G-7 leaders to discuss a united response to the Russian attack.

Earlier this morning, President Biden convened a meeting of the National Security Council in the White House Situation Room to discuss the unprovoked and unjustified attack on Ukraine. pic.twitter.com/QcZ5N2fcAa

Notably, Russia was a part of the G-7 until its illegal annexation of Crimea in 2014 — where it is now closing in further on Ukrainian borders.

Biden was at the White House overnight as the attack unfolded.

Within minutes, Biden was on the phone with the Ukrainian President Volodymyr Zelenskyy, who had reached out to him after receiving “silence,” he said, on a phone call to Putin. Russia has two tactical goals in Ukraine, according to Zelenskyy’s office: seizing territory and toppling Ukrainian leadership.

After their call, Biden released a statement saying that Putin “has chosen a premeditated war that will bring a catastrophic loss of life and human suffering.”

“The prayers of the world are with the people of Ukraine tonight as they suffer an unprovoked and unjustified attack by Russian military forces,” Biden said.

The American president has acknowledged that there will be “consequences at home” — particularly at the gas pump and in energy prices — as a result of the Russian invasion and subsequent sanctions but has vowed to mitigate those costs.

However, ahead of his Thursday remarks, U.S. crude oil prices topped $100 a barrel, sending gasoline prices to an average of $3.54 a gallon, according to the American Automobile Association. At least three states had average gas prices of $4 or higher. Meanwhile, U.S. stock and dow futures also plunged.

Still, Biden has reminded Americans that the U.S. has a responsibility to defend its NATO allies — and democracy around the world.

“Because this is about more than just Russia and Ukraine,” he said in remarks last week. “It’s about standing for what we believe in, for the future that we want for our world, for liberty, for liberty, the right of countless countries to choose their own destiny. And the right of people to determine their own futures — or the principle that a country can’t change its neighbor’s borders by force.”