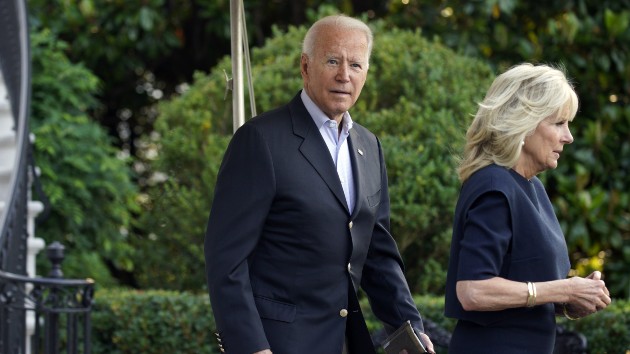 (SURFSIDE, Fla.) — Biden and first lady to meet with families of Surfside condo collapse victims
The death toll has risen to 18 after the bodies of two children were found on Wednesda…

President Joe Biden is on the ground in Surfside, Florida, Thursday following the devastating partial collapse of a beachside condominium building last week that has killed at least 18 people.

The president departed the White House early Thursday morning and was planning to spend nearly eight hours on the ground in Florida. He’s already met with local officials and thanked first responders engaged in the ongoing search efforts ahead of consoling families affected by the disaster and delivering remarks at 3:50 p.m. ET. First lady Jill Biden is accompanying him for the visit.

At an earlier command briefing with local officials, seated next to Florida’s Republican Gov. Ron DeSantis, Biden immediately made a big offer to cover the cost of the response effort.

“I think there’s more we can do, including, I think we have the power, and I’ll know shortly, to be able to pick up 100% of the cost to the county and the state,” Biden said, eliciting a surprised reaction from Miami-Dade mayor Daniella Levine Cava, who put her hand on Biden’s arm.

“I think the governor will you tell you, anything he asked for, he got,” Biden said, ahead of DeSantis nodding in agreement.

Biden took a moment to turn to politics, noting the bipartisan display of cooperation

Meeting later with a group of first responders, Biden was effusive with praise.

He also invoked three personal stories to demonstrate the importance of first responders in his own life, referring to his experience having an aneurysm, describing his two sons being pulled out of the car crash that killed his first wife and daughter with the jaws of life and explaining that his home burned down after being struck by lightning.

Search and rescue efforts were paused Thursday morning due to concerns about the stability of the remaining structure and the potential danger it poses to the crews. Structural engineers are on-site monitoring the situation as officials evaluate possible options and determine the next steps, according to Miami-Dade County Mayor Daniella Levine Cava.

“We’re doing everything that we can to ensure that the safety of our first responders is paramount and to continue our search and rescue operations as soon as it is safe to do so,” she said at an earlier press conference.

Officials were unable to provide a timeline for when the urgent operation will resume.

Separately, White House press secretary Jen Psaki said the visit has been closely coordinated with officials on the ground to ensure that it does not divert any resources away from search and rescue operations.

“They want to thank the heroic first responders, search and rescue teams, and everyone who has been working tirelessly around the clock, and meet with the families who have been forced to endure this terrible tragedy waiting in anguish and heartbreak for word of their loved ones, to offer them comfort as search and rescue efforts continue. And they want to make sure that state and local officials have the resources and support they need under the emergency declaration,” Psaki said earlier this week.

“The message that we’ve been given is very clear from the mayor’s office, from the governor’s office, from local officials, which is, they wanted us to come today, think now is the time to come, to offer up, offer up comfort and show unity from not just from him, but the country. And so this is why he and the first lady decided to come today, and he thought this was the right time to do it,” Jean-Pierre said.