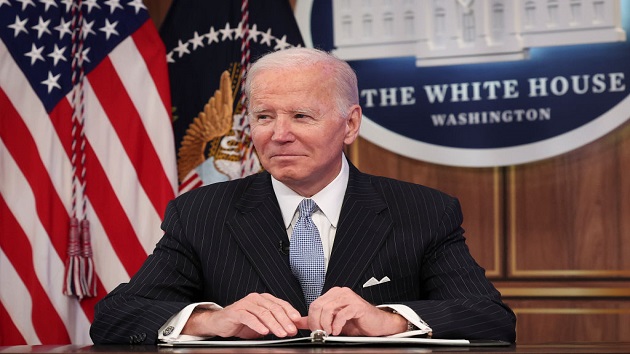 (WASHINGTON) — President Joe Biden will celebrate his 80th birthday on Sunday, marking the first time a sitting president has reached that milestone while in office and fueling speculation about how his advancing age will affect his political future.

Biden — who was the oldest person to assume the presidency in January 2021, just 61 days after his 78th birthday — has said he intends to make another White House bid, even as his age-adjacent peers, including 82-year-old House Speaker Nancy Pelosi, have made the decision to step away from leadership in order to make way for a younger generation.

“My intention is that I will run again. But I’m a great respecter of fate and this is ultimately a family decision. I think everybody wants me to run but we’re going to have discussions about it. And I don’t feel any hurry one way or the other to make that judgment.” he said last week, after helming what many say is the most successful midterm election for a sitting president’s party in decades, though noting that those results would not have an impact on his decision to run again.

Biden is the oldest person to serve as commander in chief in the nation’s history. Should he seek reelection in 2024 and win, the president would be 86 by the end of his second term. He has said he’ll talk over his future with his wife and the rest of his family over the holidays.

Biden has said he is hoping that he and his wife “get a little time to actually sneak away for a week around between Christmas and Thanksgiving” and that his decision to run for reelection will likely “be early next year we make that judgment.”

During a White House briefing with reporters on Friday, press secretary Karine Jean-Pierre said that the first lady would be having a brunch for Biden on Sunday for his birthday, following his granddaughter Naomi’s wedding at the White House the previous day.

“Usually, they celebrate on the Wednesday before Thanksgiving because everyone is going to the family is going to be here this weekend, he will have an opportunity to celebrate his birthday he wanted on his actual day,” she said.

Biden’s birthday comes right as national conversation is focused on the age of those at the top of Democratic leadership, just days after Pelosi announced that she would step down from leadership as House Democrats transition into the minority for the next Congress.

“The hour has come for a new generation to lead the Democratic caucus that I so deeply respect,” she said during her farewell speech on the House floor.

In a lengthy statement after her announcement, Biden noted his long history with Pelosi.

“I’ve seen her in action during my career as Senator, Vice President, and now as President,” he said.

On the future of the Democratic Party, Pelosi told reporters, “That’s up to them, I want it to be whatever they want it to be.”

Pelosi has maintained support for Biden throughout months of questions about his political future, particularly another run for the White House.

When asked by ABC News’ George Stephanopoulos on “This Week” last Sunday, Pelosi said she thinks Biden should run again.

Biden, known in public life for his long history of personal tragedy, has maintained that he is a “respecter of fate” regarding his decision to move forward as standard-bearer for his party and the nation.

“Fate has intervened in my life many many times. If I’m in the health I’m in now — from a good health. And, in fact, I would run again,” he said during a sit down interview at the White House with ABC News’ David Muir late last year.

But he’s faced a good deal of opposition–from both Democrats and Republicans– surrounding his seemingly likely decision to move forward for reelection.

One ABC News/Washington Post poll conducted in late September found that 56% of Democrats and independents that tend to vote for Democrats said they wanted “someone other than Biden” to run in the next presidential election.

A number of Democrats have said they wish Biden would step aside for a “new generation of leadership” echoing what Pelosi noted in her departure from control.

During the campaign cycle, Democrats such as Rep. Tim Ryan of Ohio and Rep. Dean Phillips of Minnesota, have openly suggested he shouldn’t run for another term.

Biden’s health and mental acuity is sure to be subject to intense scrutiny if he were to announce his 2024 bid for the White House, especially from Republicans who have long ridiculed his infamous gaffes during speeches, among other motor skill missteps.

In September, Biden asked about the whereabouts of Indiana GOP congresswoman Jackie Walorski, who was killed in a car crash earlier this year, during a White House conference.

The only candidate in the running so far for the 2024 presidential contest is 76-year-old former President Donald Trump, who launched his third White House campaign Tuesday evening. Trump was the second-oldest person to assume the presidency, at 70 years old.