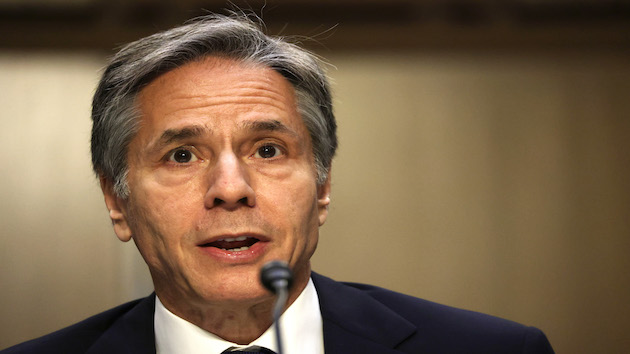 (WASHINGTON) — Secretary of State Antony Blinken said Sunday there’s been no thought of canceling President Joe Biden’s upcoming summit with Russian President Vladimir Putin, despite a string of cyberattacks on the U.S. and other aggressive actions.

“Martha, on the contrary,” Blinken said in response to ABC “This Week” co-anchor Martha Raddatz. “The president is not seeing President Putin in spite of all of these things, it’s precisely because of them. To be able to talk to him directly, clearly about these profound differences, and also to see if we can have a more predictable, stable relationship, but equally to make clear that if Russia chooses to continue to act aggressively — to act recklessly — we’ll respond forcefully, as the president’s already done.”

Biden has made clear that when he sits down with Putin, he won’t hold back.

Teasing his summit with the Russian leader, Biden said Wednesday he plans to “let him know what I want him to know.”

One critical message he will carry, according to Blinken, is demanding that Russia stop “harboring in any way criminal organizations engaged in cyberattacks, including ransomware” and urging “Russian cooperation in dealing with these criminal organizations to the extent they’re operating from Russian territory.”

But tough talk and mounting U.S. sanctions have not deterred Russian behavior, from crackdowns against domestic political opposition and pro-democracy movements to aggression overseas against neighbors Ukraine and Georgia or western democracies and their elections.

Pressed on that by Raddatz, Blinken said U.S. sanctions “can be” effective, “especially when they’re done in coordination with other countries.”

To that end, he emphasized what the administration has said is the importance of Biden meeting American allies in the Group of Seven, NATO and the European Union before sitting down with Putin.

But some of those alliances are bruised after four years of former President Donald Trump’s badgering and questioning — with many Europeans in particular unsure whether “Trumpism” is here to stay or whether “America is back,” as Biden has made his tagline for this trip.

Blinken didn’t take that political question head on, but he said the U.S. and its allied democracies have “to actually demonstrate in concrete ways that democracies working together are making a difference for their people and for people around the world” — especially in contrast to Russia and China.

Biden has sought greater G-7 cooperation to push back against Chinese economic and political coercion and trade practices, but some European leaders are skeptical of the harder American line against Beijing. German Chancellor Angela Merkel and Italian Prime Minister Mario Draghi, for example, have sought more cooperation with the Chinese government and close economic ties with China’s massive economy.

Blinken downplayed any differences among G-7 leaders, noting that their joint statement following the summit mentioned China in contrast to the last time they met in person in 2018.

“I have been at a number of these G-7s over the years, almost 25 years. This is maybe the most consequential one I’ve ever taken part in. This is one that’s actually demonstrated that democracies coming together can deliver in concrete ways for their people and for people around the world,” he told Raddatz.