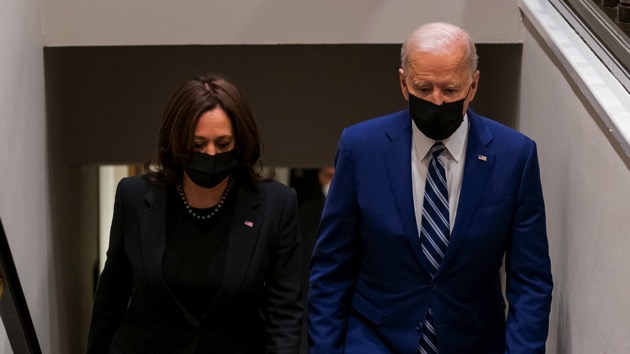 (WASHINGTON) — President Joe Biden and Vice President Kamala Harris are slated to deliver remarks Thursday as Biden signs into law the COVID-19 Hate Crimes Act that passed through Congress in an increasingly rare show of bipartisanship.

Drafted in response to an alarming rise in violence against Asian Americans during the coronavirus pandemic, the legislation is intended to expedite the review of pandemic-related hate crimes and make grants available to help local law enforcement improve reporting of bias-driven incidents.

Biden pledged to swiftly sign the bill, tweeting Thursday morning that “Hate has no place in America.” Harris, the first woman and person of Asian descent to hold the office of vice president, has expressed her full support. Thursday’s expected signing ceremony at the White House comes during Asian American and Pacific Islander, or AAPI, Heritage Month.

The House of Representatives gave final passage to the bill on Tuesday with a 364-62 vote after the Senate passed the bill last month, 94-1. All votes in opposition were from Republican members, with Missouri Republican Sen. Josh Hawley, who challenged the results of the 2020 election after the Capitol attack, standing out as the lone senator to vote against it.

More than 6,600 hate incidents against the AAPI community have been reported in the year since the pandemic began, according to a report this month from Stop AAPI Hate, a national coalition addressing anti-Asian racism. Another recent report from the Center for the Study of Hate & Extremism at California State University, San Bernardino, on hate crimes against Asian Americans in major U.S. cities found a 164% increase in reported crime in the first quarter of 2021 compared with the same period in 2020, before the pandemic surged.

Democrats have argued the rise in crimes against Asian Americans is linked to former President Donald Trump’s branding of COVID-19 as the “China virus,” among other names.

While some advocates say the bill takes relatively modest steps to equip law enforcement and communities to better deal with the rise in violence against the AAPI community, House Democrats argued Tuesday the legislation will help prevent attacks by facilitating better reporting of the incidents.

Sen. Mazie Hirono, D-Hawaii, and Rep. Grace Meng, D-N.Y., introduced the legislation after the shooting of eight people, including six Asian women, at several spas in the Atlanta area in March. Those women are memorialized in the bill’s text. The mass shooting followed a general rise in anti-Asian sentiments across the country.