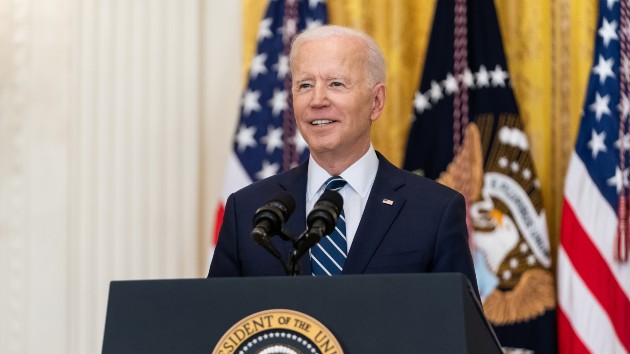 (WASHINGTON) — With the April jobs report falling well below analysts’ expectations, President Joe Biden on Friday faced both a challenge to answer why his enormous COVID-19 relief package hasn’t created a bigger economic boost, and an opportunity to underscore the need to pass his equally massive jobs and infrastructure plans.

Biden is set to deliver remarks Friday morning addressing the economy, after spending much of the week traveling the United States to sell his American Jobs Plan and American Families Plan, which would pump nearly $4 trillion in government spending into the economy.

Many economists expected nearly one million jobs to be added to the economy in April, but the total was just 266,000, a disappointing slowdown in growth.

Republicans on Capitol Hill have pinned blame for slow job growth on Biden’s COVID-19 relief benefits, including an additional $300 per week in unemployment, for disincentivizing workers from reentering the labor force.

“We have flooded the zone with checks that I’m sure everybody loves to get, and also enhanced unemployment,” Senate Minority Leader Mitch McConnell said Thursday during an event in his home state of Kentucky. “And what I hear from businesspeople, hospitals, educators, everybody across the state all week is, regretfully, it’s actually more lucrative for many Kentuckians and Americans to not work than work.”

“Why is anyone surprised that the jobs reports fell short of expectations? I told you weeks ago that in Florida I hear from small business everyday that they can’t hire people because the government is paying them to not go back to work,” Sen. Marco Rubio, R-Fla., tweeted Friday in reaction to the jobs report.

Democrats and others make the case that the reason, instead, is due to the pandemic — lack of child care, schools either closed or only partially opened, and general health concerns over returning to a workplace setting.

The White House argues that despite rising vaccination rates and state and local governments lifting restrictions from businesses, the economic scarring of the pandemic will not be quickly reversed, and long term economic aid from the government will be necessary.

Biden has been working to convince Republicans lawmakers and voters alike to support his jobs and infrastructure plans. One of the two packages, the American Families Plan, focuses on subsidizing childcare and creating universal free pre-school for 3- and 4-year-olds, efforts that could encourage parents who have dropped out of the workforce during the pandemic due to lack of childcare to get back to work. Women have disproportionately born the burden of this pandemic effect.