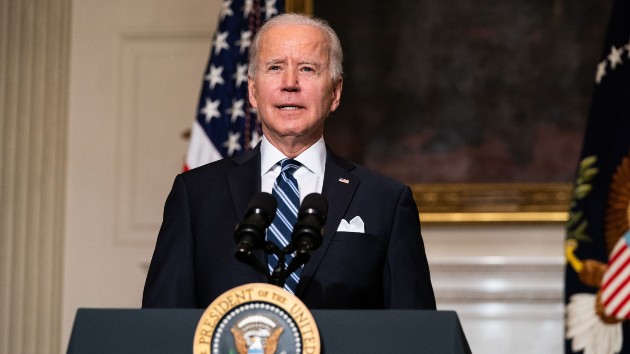 (WASHINGTON) — President Joe Biden will deliver his first major foreign policy speech in office Thursday during a visit to the State Department, where he is expected to talk about “reclaiming America’s role in the world” and restoring values to the center of U.S. foreign policy, according to White House press secretary Jen Psaki.

Biden’s speech, alongside Secretary of State Antony Blinken, will outline his foreign policy vision and how he will put diplomacy at the center of it, a senior administration official told ABC News — a point driven home by the fact that the State Department will be the first federal agency he visits as president. He is also expected to take a series of executive actions while there, the official said.

The president plans to “thank the men and women of the national security workforce for their service to our country,” Psaki added Tuesday.

While many of Biden and Blinken’s initial steps and messages have been welcomed, some career officials have expressed concern that career diplomats will be sidelined again under this administration.

Rolling back Trump’s nationalist approach to the world — which he termed “America First” — has already become a hallmark of Biden’s short time at the White House.

He has returned the United States to international agreements and organizations his predecessor left — including the Paris climate accord and the World Health Organization — and has endorsed a multilateral approach to issues ranging from the COVID-19 pandemic to China and Iran.

“We can make America, once again, the leading force for good in the world,” he declared in his inaugural address.

The president will also announce several executive actions at the State Department that are aimed at emphasizing American values in the country’s foreign policy, according to the administration official. The official would not provide more details, although one may mirror an order Biden signed his first day in office that emphasized the importance of science to the federal government’s decision-making.

At the same time, the Biden administration has made clear it believes addressing a series of domestic crises — the coronavirus pandemic, the economic crisis and calls for racial justice — should take precedence.

Multiple U.S. policies are under review by the State Department, especially those implemented by Trump and his top diplomat, Mike Pompeo, after the 2020 election. Blinken has said the most “urgent” is their designation of the Houthi rebels in Yemen as a terrorist group, which imperils food aid and other assistance to the war-torn country on the brink of famine.

The administration is also reviewing Trump’s tariffs on China and sanctions on Iran, U.S. troop levels in Afghanistan, relations with Saudi Arabia and the United Arab Emirates, and the designation of Cuba as a state sponsor of terrorism.

Biden to elevate career diplomats amid concerns over appointees

The president had originally planned to visit the State Department Monday, but his remarks were pushed back to later in the week because of a snowstorm that hit Washington, according to the White House.

But when he does address career diplomats, Biden will have done so far earlier in his term than his two immediate predecessors. Trump visited the agency after one year in office and only after firing his first secretary Rex Tillerson, while President Barack Obama’s first speech there was in 2011, three years into his first term in office.

That’s a welcome sign to many, as were Blinken’s welcome remarks on his first full day in office, telling the department’s 70,000 employees worldwide, “I will have your back.”

“It starts with rebuilding morale and trust. This is a priority for me because we need a strong department for the United States to be strong in the world,” Blinken said on Jan. 27 — adding the administration will be investing “significantly in building a diverse and inclusive State Department.”

So far, the administration has given senior roles to two men and five women, three of them women of color like Linda Thomas-Greenfield, Biden’s nominee to be ambassador to the United Nations.

But in those positions and down through lower levels, they have so far only named political appointees rather than career officials, and unlike his Democratic campaign opponent Sen. Elizabeth Warren, Biden did not pledge to end the practice, unique to the U.S., of giving wealthy donors ambassadorships.

“I’d be hard pressed going back to the Carter years to point to an incoming team that is as well-versed on the department and has such a strong history at the department, including some of the political deputy assistant secretaries they’re bringing in,” said Michael McKinley, who served as U.S. ambassador to Brazil, Afghanistan, Colombia, and Peru and resigned as Pompeo’s senior adviser.

“Yes, they’re political, but they have a long trajectory in the State Department, and they, of all people, will understand the importance of supporting the career Foreign Service. There will be a significant return to an important role for Foreign Service professionals,” he told ABC News.

Some of those senior officials are Foreign Service officers who either resigned or were pushed out by the Trump administration, with many colleagues welcoming them back — but others concerned the message is if they want to obtain senior positions, they’re better off leaving the nonpartisan Foreign Service to come back with a political appointment.

“That’s definitely not gone unnoticed,” said one U.S. diplomat, who spoke on the condition of anonymity because they were not authorized to talk to the press. “It tells us you should’ve been working for Albright-Stonebridge rather than toiling away somewhere in Foggy Bottom” — a reference to the consulting firm chaired by former Secretary of State Madeleine Albright where several former U.S. diplomats have worked, including Thomas-Greenfield and Biden’s pick for deputy secretary of state, Wendy Sherman.

A senior State Department official pushed back on those concerns, saying that the department’s “greatest resource” is “our people” and that Blinken will elevate career officials to senior positions soon.

Ambassador Eric Rubin, the president of the American Foreign Service Association, diplomats’ union, applauded Blinken and other Biden officials for reaching out already.

“They are being very proactive in reaching out and very accessible,” Rubin told ABC News. “We look forward to seeing upcoming announcements about career senior Foreign Service officer being selected for senior positions at the department.”

State Department spokesperson Ned Price hinted at the same, telling reporters in his first briefing Tuesday, “You will see a number of respected career officials assume some of the most senior positions in this building. There’s no doubt about that.”