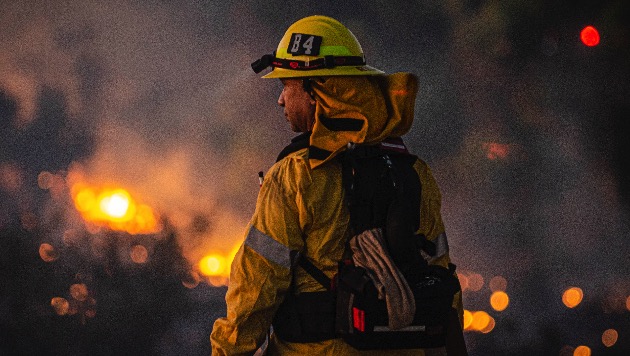 (WASHINGTON) — In the midst of a historic heatwave creating prime conditions for a historic wildfire season, President Joe Biden announced Wednesday he plans to raise the federal firefighter pay to at least $15 an hour and offer new retention incentives amid turnover, as the White House seeks to boost its wildfire preparedness.

“Because of climate change, wildland firefighting is no longer a seasonal endeavor,” said a fact sheet from the White House.

Biden discussed the plans on Wednesday while meeting virtually with governors from Western states, Cabinet officials and partners from the private sector to discuss wildfire preparedness.

He began by invoking the devastating images from last year.

“We’re remembering the horrific scenes from last year. Orange skies that looked like End of Days, smoke and ash that made the air dangerous to breathe, more than 10 million acres burned, billions of dollars in economic damage, families that lost their homes and everything they own. And too many, too many lost lives,” Biden said.

And with that stark remembrance, Biden noted that this year is already threatening to be worse and argued that climate change shouldn’t be a partisan issue.

“And this year, we — they could be even tougher based on the weather patterns. You know, California and some other places, the drought conditions are twice … what they were last year.”

He noted that there are more than 9,000 firefighters already deployed across the Western U.S., and it’s only June.

The president also addressed head-on those who are dealing with historic highs this week, calling for people to take care of one another.

“I want to note that the extreme heat we’re seeing in the west is not only a risk amplifier for wildfires, it’s a threat in and of itself. People are hurting. It’s more dangerous for kids to play outside. Roads are buckling under the heat. Again, I need not tell all of you: We need people to check on their neighbors especially seniors who may need a helping hand,” he said.

The meeting and policy move came after Biden expressed his dismay at the federal wage while visiting the Federal Emergency Management Agency last week.

The sentiment was echoed by an administration official previewing Biden’s plan on a call Tuesday night.

The official said that, for this year, federal firefighters’ pay raise will come in the form of “provisional bonuses” and that permanent firefighters working on the front lines will receive up to a 10% retention incentive. Temporary workers can also qualify to receive some incentive pay.

“The goal here this year, because we have had a very short runway in getting prepared, has been to find ways to address what we learned, which is that there is this challenge with respect to both recruitment and retention of firefighters that we need across the nation,” the official said.

The Biden White House is also announcing a series of actions to help fight fires and improve how the government responds in the short and long term.

“We’re going to work on additional measures with Congress to move beyond these short-term solutions to address, longer-term needs with respect to compensation and benefits, and work life balance reforms for federal wildlife, land, firefighters,” the official added.

As of last Wednesday, there were at least 50 large wildfires burning more than half a million acres across 11 states — mostly in the West.

Since 2015, the U.S. has had roughly 100 more large wildfires every year than the year before, according to the White House, and the 2021 wildfire season is already outpacing the last.

The White House is also making new preparations for major impacts to power grids, increasing aviation capacity to respond to fires and developing new technologies, including satellites, to improve early detection of fires along with apps, maps and resources so Americans can access information from their phones.