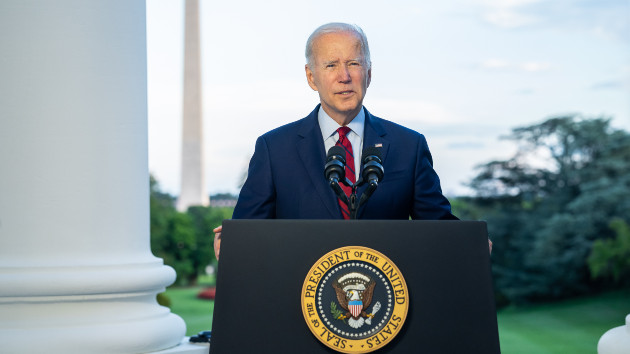 (WASHINGTON) — President Joe Biden is stepping up efforts to make abortion rights a major focus for Democrats as the midterm election cycle enters its final weeks.

Biden will highlight the contrast with Republicans on the issue when he speaks Tuesday at an event hosted by the Democratic National Committee at the Howard Theatre in Washington.

There, a DNC official said, he will announce that the first bill he will send to the next Congress, if held by Democrats, would codify Roe v. Wade, the landmark abortion decision the Supreme Court overruled in June.

“President Biden will speak about the choice that voters face this November between Republicans who want to a national abortion ban that would criminalize doctors for performing care, and Democrats who want to codify Roe into law to protect women’s reproductive freedom,” the official said. “He will say that if the American people elect more Democratic Senators in November and keep the House Democratic, the first bill he will send to the next Congress will be to codify Roe — and he will sign it around the 50th anniversary of the Roe decision.”

Biden has advocated changing the Senate’s 60-vote filibuster so the Democrats could pass legislation protecting abortion access. But two Democratic senators, Joe Manchin of West Virginia and Kyrsten Sinema of Arizona, are opposed to eliminating the longstanding chamber rule.

“If you give me two more senators in the United States Senate, I promise you, I promise you, we’re going to codify Roe and once again make Roe the law of the land,” Biden said at the National Education Association last month.

Since the Supreme Court’s decision, at least a dozen states have ceased nearly all abortion services. At the federal level, Republican Sen. Lindsey Graham has also floated legislation that would prohibit the procedure after 15 weeks of pregnancy except in cases of rape, incest or risk to the physical health of the mother.

“The assault on women’s access to reproductive healthcare by Republican officials is an assault,” Jean-Pierre said. “And the president is going to speak about that, as he has been for the past several months.”

Despite the heated rhetoric surrounding abortion rights in critical House and Senate races across the country, a new poll suggests it may not be the winning issue Democrats hope it will be to help them keep majority control in Congress.

In September, the poll found women who identified as independents backed Democrats by 14 points. In the latest poll, these voters backed Republicans by 18 points.

House Democrats passed two bills in July to protect abortion access and enshrine Roe v. Wade in federal law. But the legislation has yet to be taken up in the Senate.