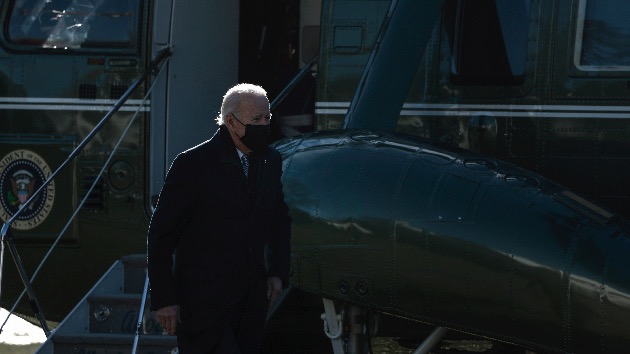 (PITTSBURGH) — Just hours ahead of President Joe Biden traveling to Pittsburgh to stress improvements needed for the nation’s infrastructure, a bridge in the area collapsed on Friday morning, coincidentally providing Biden an opportunity to tout how his bipartisan infrastructure law provides funding for badly needed repairs.

Biden was scheduled to make 2 p.m. ET remarks on Friday at Carnegie Mellon University, a few miles away from the collapsed bridge near Pittsburg’s Frick’s Park. Ten people were reported injured, according to local authorities.

The White House said not said whether Biden will visit the collapsed bridge, but he has been briefed on the situation.

“The President has been told of the bridge collapse in Pittsburgh. Our team is in touch with state and local officials on the ground as they continue to gather information about the cause of the collapse. The President is grateful to the first responders who rushed to assist the drivers who were on the bridge at the time. The President will proceed with trip planned for today and will stay in touch with officials on the ground about additional assistance we can provide,” the White House said in a statement.

While the president’s domestic agenda has taken the back burner over the past week in the face of threats from Russia on the Ukrainian border and major Supreme Court news, Biden’s appearance puts the spotlight back on his victory in getting the bipartisan infrastructure law passed.

The legislation would provide $1.63 billion to Pennsylvania in federal funding for bridges alone, the third-highest figure for any state. Pennsylvania has 3,353 bridges in poor condition, the second most after Iowa, according to administration data. The bridge program will provide $27 billion across the country.

Pennsylvania, Biden’s home state, has long been a politically symbolic state for him.

Pittsburgh was where he kicked off his 2020 candidacy, and the Keystone State ultimately cinched his presidency. He also unveiled what became the bipartisan infrastructure law there last March.

But several of Pennsylvania’s high-profile Democratic candidates told ABC News, while they support the president and his policy efforts, they also won’t be in attendance for Friday’s event in Pittsburgh, citing “scheduling conflicts.”

A campaign spokesperson for Attorney General Josh Shapiro — who is likely to become the Democratic gubernatorial nominee — tells ABC News the Attorney General is “focused on the issues that matter to Pennsylvania families” but won’t be in Pittsburgh on Friday.

“Like every American should, Josh wants our president to be successful and we’ll continue welcoming President Biden to his home state of Pennsylvania as he touts small businesses and jobs that have been saved by the bipartisan American Rescue Plan and the tens of thousands of Pennsylvania jobs that will be created by the Bipartisan Infrastructure Law,” the campaign spokesperson said.

Lt. Gov. John Fetterman, a leading candidate in the Democratic Senate primary, told ABC News, “It’s great that President Biden is coming to Pittsburgh to talk about infrastructure. If infrastructure is Elvis, then Pittsburgh is Graceland. It’s great to come to the city that helped build America to talk about rebuilding America. I’ll be in Harrisburg on Friday meeting with Democrats from across the commonwealth at State Committee and talking about the 2022 midterm election.”

Rep. Conor Lamb, D-Penn., running for Senate in the state, will meet with Biden.

With Pennsylvania’s primary elections are still months away, the unfavorable poll numbers looming over the Biden administration could factor into how Democrats interact with the president on the campaign trail.