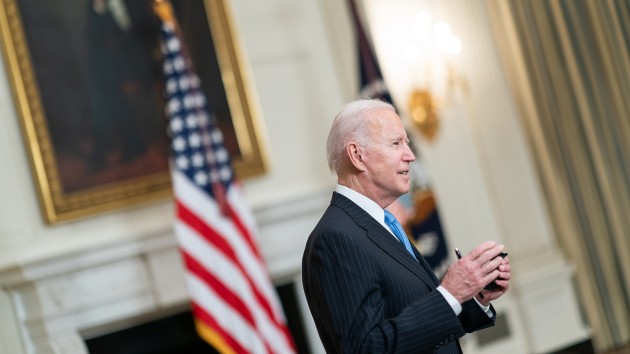 (WASHINGTON) — With GOP-led legislatures advancing new voting laws and Congress deadlocked over proposed legislation, President Joe Biden is expected to deliver a major speech on voting rights in Philadelphia on Tuesday as his administration wades more aggressively into the fight over ballot access at the urging of civil rights groups and Democrats.

Previewing his remarks on Monday, White House Press Secretary Jen Psaki said Biden would directly call out lies from former President Donald Trump and other Republicans about the integrity of the 2020 presidential election, and “decry efforts to strip the right to vote as authoritarian and anti-American.”

“He’ll call out the greatest irony of the ‘big lie’ is that no election in our history has met such a high standard with over 80 judges, including those appointed by his predecessor, throwing out all challenges,” Psaki said.

National Urban League CEO Marc Morial, who was one of a handful of civil rights leaders to meet with Biden at the White House last Thursday, told ABC News the group asked Biden “to put the full moral prestige and the power of the presidency” behind voting rights, to help frame the debate for the American people.

The Justice Department has also sued the state of Georgia over its new voting law, and Attorney General Merrick Garland has announced plans to beef up the department’s Civil Rights Division to help defend voting rights.

Biden’s speech on Tuesday comes as Democrats in the Texas State Legislature fled the state for Washington, D.C., the second such effort in recent weeks to derail the passage of sweeping GOP-authored voting legislation by trying to prevent Republicans from taking up the proposals in a special legislative session.

Roughly 17 states have enacted 28 laws that would restrict voting access, out of hundreds that have been introduced throughout the country, according to the Brennan Center for Justice at NYU School of Law.

“You can’t disassociate Jan. 6 with what is happening in the states,” Morial said of the Capitol riot that sought to disrupt the Electoral College count. “This is all sour grapes over losing an election.”

Earlier this month, the Supreme Court upheld two GOP-backed voting restrictions in Arizona, imposing new limits on Section 2 of the Voting Rights Act of 1965. Liberals on the court argued that the decision would weaken protections against racial discrimination.

That ruling, together with the flurry of state-level actions on voting, has led civil rights advocates to push the White House to more vocally make the case for federal voting rights legislation.

“The Court has put the ball in Congress’ court, and now it’s on Congress and the administration to actually take that up now,” said Wendy Weiser, the director of the Democracy Program at the Brennan Center.

In March, House Democrats advanced HR 1, the For the People Act, an expansive package that would transform federal elections, voting and congressional redistricting. But it has stalled in the Senate after failing to advance in a procedural vote late last month, over opposition from all Republicans.

Senate Minority Leader Mitch McConnell, R-Ky., panned the bill and accused Democrats of attempting a “power grab” with the proposal.

A more measured proposal named for the late Rep. John Lewis, D-Ga., which would restore pieces of the Voting Rights Act struck down by the Supreme Court in 2013, has also failed to advance through Congress.

In light of the GOP opposition, Democrats have pushed for the Senate to reform the legislative filibuster, with House Democratic Whip Jim Clyburn, D-S.C., a key Biden ally and endorser during the 2020 Democratic primary, suggesting Democrats create an exception to the 60-vote threshold for election reform and other constitutional issues.

When asked about Clyburn’s call for a filibuster exemption for voting rights, and if the president agreed, Psaki punted the issue back to Congress.

“I will say, though, in terms of how this works, the filibuster is a legislative process tool, an important one, that warrants debate but determination about making changes will be made by members of the Senate, not by this president or any president, frankly, moving forward,” Psaki said Monday.

“There are two pathways forward” for voting rights reform,” Morial said. “Either you try to find an agreement with Republicans, so you have a bipartisan bill, or the pathway forward is to create a carve out for the filibuster.”

Asked how Biden responded in their meeting last week, Morial told ABC News the president “simply made a comment that, ‘I know the Senate better than anyone,’ and that’s probably true.”