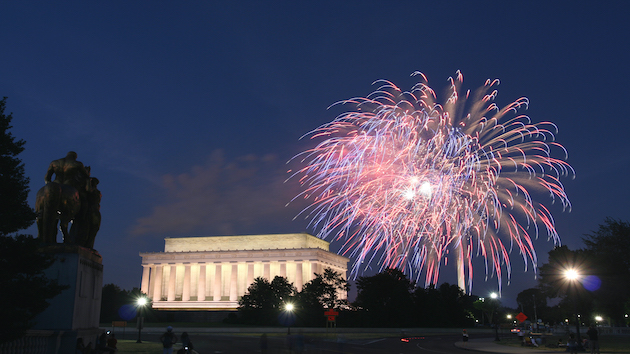 (WASHINGTON) — “America is back,” says President Joe Biden, and so are July Fourth traditions in the nation’s capital.

Though the country isn’t on track to meet Biden’s goal of having 70% of American adults vaccinated with at least one dose by July Fourth, the White House is eager to tout what it views as success reining in COVID-19 with an Independence Day celebration intended, Biden said in March, to highlight America’s “independence” from the virus.

Biden plans to host first responders, essential workers, and military service members and their families on the South Lawn on Independence Day, a White House official confirmed to ABC News on Tuesday. More than 1,000 guests are expected, though final details are still being sorted out.

It’s slated to be the largest event yet for the Biden White House. Under current policy, guests to the grounds must have tested negative for COVID-19. At a bill signing indoors last month, vaccinated lawmakers were back to pressing the flesh without masks, signaling one might expect to see a packed house July Fourth as well.

The plans were first reported by the AP.

In addition to the party at the White House, the National Mall will also be open for the traditional holiday fireworks, giving friends and families in Washington the chance to watch the display together after public parties in the district were restricted for much of the last year.

The National Park Service announced Tuesday it will put on a 17-minute display starting at 9:09 p.m. with fireworks launched from both sides of the Lincoln Memorial Reflecting Pool. The organization called for unvaccinated attendees to wear masks indoors and “crowded outdoor spaces,” citing Centers for Disease Control and Prevention recommendations.

Along with the celebration in the nation’s capital, the White House will also activate state and local partners to host their own events across the country.

Earlier this month, Biden announced the specific goal of getting 70% of adult Americans at least partially vaccinated by July Fourth to motivate the country to return to a sense of normalcy, pitching the deadline as a gateway to “a summer of freedom.”

“Take at least five actions to help in June, and you might even be invited to visit us at the White House in July to celebrate independence together,” Biden teased in remarks June 2 to kick off his “national month of action” to mobilize vaccinations.

But when Biden pitched the date as a key marker for him back in March, he painted a picture of small gatherings for the holiday.

“If we do this together, by July the 4th, there’s a good chance you, your families, and friends will be able to get together in your backyard or in your neighborhood and have a cookout and a barbeque and celebrate Independence Day,” he said on the anniversary of America shutting down due to COVID-19. “That doesn’t mean large events with lots of people together, but it does mean small groups will be able to get together.”

Fourteen states and Washington have now reached the Biden administration’s goal of vaccinating at least 70% of their adult population with at least one dose — a stark contrast to the news last July Fourth that saw more than 50,000 Americans diagnosed with the virus a day in the lead up to the holiday.

Still, the administration needs about 14 million Americans vaccinated in the next three weeks to reach its goal. With vaccinations dropping off — from nearly 2 million per day two months ago to less than 370,000 a day now — Biden appears on track to miss another self-imposed deadline. (He set a goal to sign policing reform legislation by the anniversary George Floyd’s death in May. Negotiations are ongoing).

And with experts warning of the delta variant taking hold of and vast geographic disparities in vaccinations, some say it may be too soon to encourage parties across the country.

As more elements of life return to business as usual, the administration is hoping its month of national action and plethora of partnerships with public and private companies will help encourage Americans still holding out on vaccinations to get their shots. So far, more than 64% of Americans have received at least one dose, according to the CDC.

“Regardless of where we are on July 4th, we’re not shutting down shop on July 5th. We’re going to continue to press to vaccinate more people across the country,” White House press secretary Jen Psaki said earlier this month when asked about concerns about not meeting Biden’s goal.

Jay Van Bavel, an associate professor of psychology at New York University, told ABC News in March, when Biden set his sights on July Fourth, that choosing that date can make a difference in how Americans respond.

“July 4th is part of the signature day of national identity for Americans,” Van Bavel said. “And so doing that is symbolic, it’s signaling that this is something we should all pull behind in every state, in every city, in every town, to try to accomplish.”