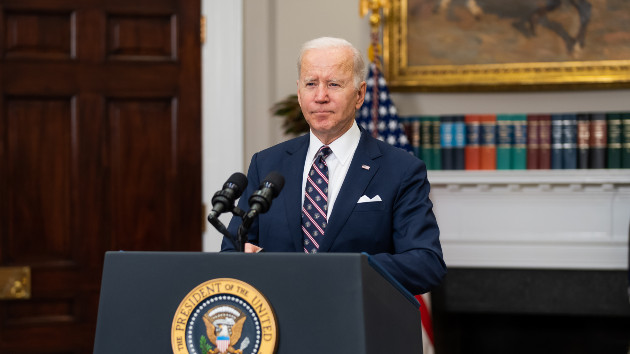 (WASHINGTON) — President Joe Biden is expected to tout the nation’s economic recovery when he delivers remarks from the White House on Friday.

U.S. employers added 431,000 jobs in March and the unemployment rate dropped to 3.6%, the Bureau of Labor Statistics said Friday.

Though the March report came in slightly below economists’ expectations, the numbers for January and February were revised higher to show 95,000 more jobs added in those months.

The labor force participation rate, or the number of people in the economy looking for work, is inching almost back to where it was before the pandemic. As employees head back to the office, teleworking fell to 10% from 13% the previous month.

March marks the 11th consecutive month of job growth above 400,000. According to The Wall Street Journal, this is the strongest job growth in the U.S. since 1939.

More than 19.9 million of the 22 million jobs lost at the peak of the pandemic have now been recovered, with economists expecting a full recovery by the summer.

“The March jobs report was right down the fairway – lots of jobs, lower unemployment, and higher labor force participation. The job market is rip-roaring. While not quite back to full-employment, the economy is close, and at the current pace of job growth will be there by summer,” Mark Zandi, chief economist at Moody’s Analytics, wrote on Twitter. “But it is somewhat disquieting in that the job market must cool off quickly, or inflation, our number one economic problem, will soon be a much bigger one.”

The report, while strong, comes amid soaring gasoline prices and 40-year high inflation, which has cost Biden in the polls ahead of this year’s midterm elections. Seventy percent of Americans disapprove of his handling of inflation, according to an ABC News/Ipsos poll released earlier this month.

Meanwhile, the Federal Reserve just two weeks ago raised short-term interest rates for the first time since 2018 and said it will raise them six more times this year in an attempt to offset inflation.